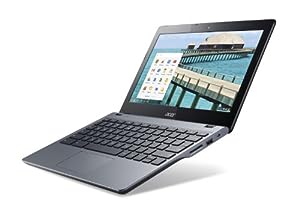 A bit off topic, but I always wondered if a 720 feels fast enough for daily usage. I have a MacBook 5,1 now and I'm seriously doubting to just buy a c720 and put Linux on it to replace it. I would go for this one with an i3 cpu: http://www.amazon.com/Acer-C720-3404-11-6-Inch-Chromebook-Granite/dp/B00KOUIZBC

Is this your main computer?

I bought one of these, Dec 2014. Swapped out the SSD for 256GB one and installed the HugeGreenBug variant of Ubuntu 14.04. https://www.distroshare.com/distros/get/12/

Booting up is a pain, because you have to type Control L or I or something to get it to move forward. And the trackpad sensitivity is a little wonky. Other than that, it runs fine.

I haven't used it for more than a few minutes, gave it to my brother. I think he's adapted to the quirks.

I think I would not do it again, but instead go for a normal laptop. Having to use a separate distro is a pain. Swapping the SSD was annoying. The little gotchas are annoying. And the price of normal laptops with core i3 or higher dropped this past year.

Both with 4GB of ram. The Toshiba is fast enough to do pretty much everything you need to do with a Chromebook and is also fanless. However, if you plan to run Linux and other "non-Chrome" stuff then the Acer might be better for this. These are the 2 models that most people around here will recommend, depending on your needs.

Other than the Pixel, this is the fastest Chromebook there is.

Awesome. So just to be clear -- do you have crouton installed? Or are you [somehow] running everything on the ChromeOS side?

I just ordered a shiny new Acer c720 (which just fell $30 in price this morning!), and plan on using it entirely as a coding machine on the go -- Anaconda, git, R, and maybe one or two others are really all I need. So your suggestion is great.

What was your setup process? I'd be very tempted to do the same myself.

There are a couple of decent detailed reviews of it on Amazon. But I am curious if there's a video review/unboxing.

I have a question.

Will this chromebook suffice for me?


A little more about myself:

I'm a Computer Science student and I have a Windows desktop at home. The only problem being that I'm in school for nearly the whole day. I need something that is powerful enough to compile my programs (mainly C and Java) and also should be able to run games to pass time.

I was kinda wondering why this didn't make it into the list and I'm not really fond of Celeron processors as I want an inexpensive yet future-proof chromebook since I'll be sticking with this until I graduate.

I would recommend a Core i3 Chromebook if you're going to run Steam. (I'm going to assume that you know that you'll have to install Linux to play most games on Steam).

There is also the Dell Chromebook Core i3 version if you want a sturdier Chromebook with better build quality.

&gt; So I need a chromebook with 4gb ram right? And haswell instead of bay trail/k1. My limit is 300€, what do you suggest?

Amazon currently has the Acer C720 with the i3 processor at $340 which would be 279.12 euros. Not sure how much shipping would cost but it has the 4GB ram and the i3-4005U processor which is Haswell.

&gt; And is it right that i can cast my Windows PC on the Chromebook and use those programms as I would on my PC?

There is Chrome Remote Desktop if you want to do that.

For what you want get the Acer c720 and if you can spring for it get the i3 with 4gb of ram.

You can use crouton on a chromebook to run ubuntu side by side with chromeos, or just replace chromeos with ubuntu. The acer c720 is now available with a core i3 and 4 gb of RAM, and if you use crouton you should be able to get 7 or 8 hours of battery life out of it.

I love it. Took it for three months to Europe in my backpack with no issues, is FAST, and has decent storage when you add a cheap SD card.

Holy shit, today's my lucky day. I have been rocking Linux for quite a while using GaliumOS on my C720, but it'd be nice to have the macOS integration of my laptop with my computers at work and home.

Edit: wait, touch screen? Are you not using this c720?

I'm trying a Chromebook to replace 2 Macbook Pros (1 work, 1 personal). It's on the way from Amazon, and I'm starting my experiment tomorrow.

I work for a tech startup. I'm a developer by trade and have recently moved into management and operations. 99% of the non-dev work I do is thru web-based tools. My company uses Google Apps (Gmail, Docs, Sheets, Slides, etc.) and I vastly prefer those to the desktop counterparts (Microsoft and Apple). SO much of what gets done in businesses is getting done in the browser these days.

I've learned that the dev work I do can be handled on a Chromebook in 1 of 2 ways:

And, OP, if you do decide to get a supported Chromebook, I recommend this one. I've really enjoyed it! \^_^

Does the Acer c720 (this model http://www.amazon.com/gp/product/B00KOUIZBC) support a second extended display? I've wanted a chromebook to replace my desktop for awhile but this is a question i seem to be getting mixed answers with, and a second monitor is a bit of a dealbreaker for me.

Well, how does your current chromebook perform for you? Surely you've used it with the above scenario of 25 or more tabs?

This is just a guess, but the "perfect," no-compromise chromebook probably won't be out til early-mid 2015 (next gen intel processor and IPS screens). People say not to wait for what's next, but every now and again, it really isn't a bad idea -- especially with all of these refurb c720s floating around.

If you're really dead set on the i3 model (because it seems like you want someone to talk you into it), I've seen a few on ebay for $299. I also saw an amazon seller with refurb units in stock for $330 or so. Here's the link:

Hm, now I'm gonna have to debate between that one and the Acer C720-3404 I was planning on getting. I like the i3, extra RAM, and bigger SSD, but those extra few inches of screen space... Probably still gonna go with the C720 when I decide to upgrade.

My pick right now would probably be the Toshiba Chromebook 2 full HD model @ $329 USD. It sports a 1080p IPS display and has the best screen of any chromebook on the market right now. Top notch if you plan to watch a lot of video. The speakers are decent as well.

or optionally wait until a bit later in the year when some of the Broadwell machines hit market. Acer has got some nice computers coming up.

Definitely get one with at least 4gb of RAM. That and a FHD display will be very difficult to find for $250. If FHD is really important, maybe take a look at the Dell Chromebook 13? If not Dell's Chromebook 11 is also really good. Personally I like the Acer C720, but I haven't tried either of the Dell models yet (still waiting to save up for a high-spec 13).

one month later... do you still love it?

Hoping to pick this up today.. let me know :D

Yeah, it sounds like it might be better idea to buy a new one. I was looking at this one, which seems pretty hefty (after dealing with the 11, while the screen is nice, I'm pretty sure I'd rather just have the damn thing work).

According to the comments over at /r/Crouton, they've been able to get both VLC and a formidable array of games on the Acer C720.

As for your questions:

Update: see below comment - the Tegra K1 CPU/GPU used in these laptops will not run DotA. I've updated the article accordingly.

I think both the Acer Chromebook 13, and the new Acer C720 11" with Intel Core i3 will both run DotA like a beast. Go for whichever screen size you prefer.

The chromebook c720, and its newer i3 variant are super cheap and run linux very well. no issues. I got the 2GB model for $130, easily 8+ hours of battery. and way smaller than any of my school books. Uses Atheros wifi.

The C720 with the i3 would probably be your best bet for that price.

Just like /u/ihatesemicolons mentioned, you won't find those internals on a larger screen.

Technically it's not correct that you can't install anything on a chromebook, so long as you are willing to get your hands a little dirty to get things to work. You can use crouton to install a linux distribution that runs alongside chromeos. You get all the benefits of the optimizations done to chromeos, but you can run basically any linux application on it. This is made slightly complicated by the fact that chromebooks come with various processor types, to have the greatest compatibility with linux software, one with an x86 processor is preferrable.

This is slightly advanced, and you comprimise some of the security that comes into the os itself as you are essentially running it in developer mode in order to run arbitrary applications, but once it's setup and you start it, basically you can switch between chromeos and crouton just via a keybinding (ctrl+alt+shift+[back/forward]).

As far as the chromebook to use for it, I would recommend one with an x86 processor and ideally 4 gigs of ram, due to the fact that you are basically running 2 OSes at once. The one that I personally use for my purposes is the i3 version of the Acer C720. This is one of the pricier chromebooks, but has a lot of oomph in the processor because it has an i3 rather than a celeron. Though be aware that the hardware is not the greatest, TN screen and such. Another reason I got this particular one is to be able to replace the SSD within it to a 128 gig one to be able to better store everything.

This is the one that I recommend. It has 4gb of ram with a 32gb ssd. And of course the i3.