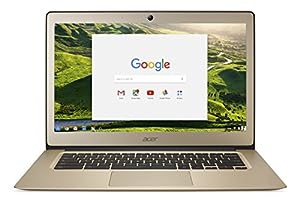 I would probably suggest looking into the Acer Chromebook 14 for $275. I really don't think you'll find a windows laptop in this price range with an IPS display unless you look for something used on ebay. The cheapest windows laptop will come in around $500.

The Acer Chromebook 14 is currently on sale though (typically $300) and is a pretty excellent chromebook with a very decent Celeron N3160 processor, 4gb of ram and a 32GB Emmc SSD. It also has a full 1080p IPS display, and a long battery life. It's decently portable as well at 3.4 pounds, and has a 100% aluminum case.

The first thing that comes to mind is Acer Chromebook 14. The gold version is an exceptional beauty, in my opinion, and the build is, from what I've heard, quite solid.

The price should definitely fit your budget, and I am almost sure it will, eventually, receive Android app support. It probably won't run apps that require a touchscreen and/or sensors like a gyroscope, but things like the Android version of Microsoft Office and the Adobe Mobile apps will be available, should your dad want them.

The display size, 14 inches, is probably as close you can get to 15" unless you decide you want Acer Chromebook 15, which, while a viable choice, is worse than the Chromebook 14, IMO. The quality of the display is also great. Nothing mind-boggling, but it's well-made and looks good. The fact that it's 1080p helps, too.

The specs should also be good enough: the CPU does its job and 4GB of RAM is enough for Chrome OS.

Unfortunately—and oddly—it doesn't come with a micro SD card slot (ironic, considering my original comment). There are workarounds, like /u/Try_to_guess_my_psn suggested: Google Drive is a great way to store stuff, and whatever you want to be available all the time, you can download (or "enable offline", as Drive calls it). The only other option is, probably, an external drive. The choice is up to you guys.

All in all, it's an excellent Chromebook, and probably the one I'd be getting if I wanted to pay less than $300 and didn't need a touchscreen with a built-in digitizer for proper stylus support (I mentioned sub-300 because, otherwise, I'd probably get HP Chromebook 13. But that starts at $499).

Not the OP, but my father just received an Acer Chromebook 14 and we want to know what these options you're talking about are. Would really like windows, but seems like that's not an option, huh. The processor is an "Intel Celeron N3160 Quad-Core Processor 1.6GHz with Intel Burst Technology up to 2.24GHz"

Edit: and link to specific laptop, just in case it's useful

SECTION | CONTENT
--|:--
Title | Gold Acer Chromebook 14 Review
Description | Buy Now from Amazon: http://amzn.to/2iVtP6o (affiliate) Back in May of this year, we put out a video review of the Acer Chromebook 14 when it was released. Clad in aluminum with a Full HD display, the device was impressive at an even more impressive price. Fast forward 7 months, and we now have the gold version of the Acer Chromebook 14 in the office. And we also have Chrome OS 55 running on it. And the combo makes for a much-improved experience versus what I experienced back in the spring....
Length | 0:07:27

So all you want to do is take notes and maybe do presentations?

You want to take it to school so a big battery and low weight are important?

You want to spend as little as possible?

I highly recommend this; it's the best Chromebook in its class right now.

Okay so I don't know what kind of games you play on that computer but I doubt they run very well unless all you're playing is solitaire.

So, in my humble opinion I'm gonna go with the guy above and say that you need a laptop and a desktop PC.

And this is why:

You say you're a power user but being on the computer all day playing games does not make you a power user. It just means you play too much. But, it does mean that you probably have the laptop plugged in all day which is really bad for it, you're gonna fry the battery. So in that case you need a desktop PC.

Now, if you still need to get a laptop to take it around class to take notes etc. Go with a chromebook, I personally have this one .

And then make your own desktop PC (Any manufactured computer you buy is gonna be either too expensive or shit).

Both a lightweight student laptop and building your own entry-level gaming desktop PC should run you for less than $1500 maybe even less than$1000 if you shop around. Which is gonna be about the same price if you get a decent gaming laptop.