Reddit mentions of Beyond Measure: Modern Physics, Philosophy, and the Meaning of Quantum Theory

We found 2 Reddit mentions of Beyond Measure: Modern Physics, Philosophy, and the Meaning of Quantum Theory. Here are the top ones. 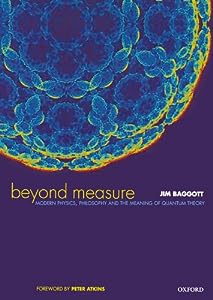 Found 2 comments on Beyond Measure: Modern Physics, Philosophy, and the Meaning of Quantum Theory:

This is definitely not a stupid question, but very quickly gets to the heart of the matter.

Kuhnian Paradigms, Lakatosian research programs, Dennett's Stances, Rorty's interpretative communities, Davidson's radical interpretation, Wittgenstein's modes of life, Heidegger's readiness-to-hand (with some modification), Hegelian Geists', Quinean evolutionary epistemology &amp; jettisoning of analytic/synthetic divide, Derrida's no outside-the-text, Habermas' spheres of communication, Luhmann's systems, Putnam's later work &amp; so on (and forgive me for some jostling, as obviously the analogies here are not perfectly apt) are all in their own way subsets of or presuppose epistemic disunity.

This is basically indisputable--what the disagreement it is, several-fold.


First, to get it out of the way, most philosophers of science &amp; scientists dismiss my second group of differences as important whatsoever, relegating these to the "sociology of science" at best &amp; triviality at worst.

Second, and related to the first point, many dismiss the relationship between context of discovery &amp; context of justification--most of the above, they say, applies in one camp or another, but the two are not unified. Scientific method, they assert, is the province of discovery, not justification. Whether or not a 'discovery' is justified successfully &amp; believed, they grant is empirical, but its truth, they assert, must inhere in its discovery.


Third, we have several divides disciplinarily, in that the philosophy of science itself divides into analytic &amp; continental camps, with the former massively having priority within science itself, even as these two camps share analogies &amp; implications.

But, even within analytic's dominance, a time issue remains, as it is early analytic philosophy like positivism &amp; Popperianism which holds sway within science generally as a sort of folk theory of their own work &amp; middle-to-later analytic work--Wittgenstein's turn, Putnam's strong externalism, Davidson's radical interpretations--and so on is much less pronounced.

Some later work, like Searle &amp; Kitcher makes odes to my points above &amp; is read by scientists &amp; such, though is much more mundane. That said, I've some distance with the world of analytic philosophy now, but from what I gather, cool perspectives stemming from Getier cases, Modal realism, performativity in language, presentism in metaphysics &amp; even far afield like feminist epistemology are getting more of their due--and some of this work, I know for a fact, scientists appreciate, such as Modal realism (which I think many see, somewhat inappropriately, as an empirical proposition describing their work, but hey you can't win 'em all).

But this divide then splits outward too, as the philosophy of science has remained opposed to, though in silent dialogue with, Science &amp; Technology Studies, which as a discipline comprises sociological, anthropological, political scientific, literary, historical, archival, rhetorical, media studies of science, with some work on the economics, cognition &amp; 'science' of science as well. STS' assertions will often be orthogonal to much analytic philosophy (though less so today as implied above) but especially to scientists sort of spontaneous worldview, for lack of a better word.

Hence, we have the 'Science Wars' &amp; 'Sokal Affair' of the 90s, where respectively, an arrogant straw-man of STS was used as a cudgel &amp; an act of bad faith used to mock (and not to play point counter, but the Bogdanov's got far more over on physicists than one physicist did on STS). The word 'social construction' became fatuous or an object of scorn &amp; mockery, a short hand for postmodern lunacy. Trotted out were accusations that 'post-modernism &amp; STS' were relativistic Trojan horses attempting to legitimate everything from religion, to fascism to folk medicine.

Of course, the irony is that STS, was actually more scientific than the philosophy of science or the naive auto-anthropology of scientists &amp; was, in the last instance, there to improve science, not destroy it. B. Latour's book was loved by Salk whose lab he worked in. R. Lewontin &amp; S.J. Gould came around to the STS camp. Pinker even inadvertently cites Steven Shapin &amp; NdGT cites Naomi Oreskes' both of whom are firmly in the STS camp--not realizing they're using ostensibly relativistic, constructivist accounts (or at the very least ones which do not distinguish between justification/discovery, epistemology/sociology).

And here's my bugbear: had the acrimony &amp; snark been stripped away in the early 90s on both sides &amp; STS was listened to I think a lot would be different intellectually today. STS warned scientists: do not be arrogant, do not impose, do not be so self-assured, do not use loose terms &amp; undefined words, do not force analogy or outcome, do not worship evidence or method for its own sake, do not denigrate other epistemologies, do not denigrate other disciplines, do not assure yourself of your unity, objectivity, skepticism, freedom from bias &amp; politics &amp; asociality. Remember, they said, science is definitionally social &amp; institutional, involves rhetoric from step one, involves a diversity of disciplines, methods, theories, equipment, styles &amp; personalities, is not free from the issues plaguing the fact/value, analytic/synthetic, genesis/structure &amp; nature/culture divides and is not assured a permanent place in the world as the queen of policy, morality, culture, media, technology &amp; esteem.

(On the other hand, had STS not been so keen to snarkily dismiss scientists &amp; their own accounts, things may have also been different. As Paul Churchland points out, the naive &amp; spontaneous epistemology of scientists may be 'wrong'--inasmuch as a worldview can be wrong--but an anthropologist can't dismiss the natives, they have to understand them and precisely take their own interpretations into account. An anthro or soc who mocked an Amazonian tribe or Inner city Gang would be ruthlessly untethered from the discipline--but this was acceptable, for a long time, in STS, though not as much (Edit) now. Clearly, tacit/local/folk theories of any 'natives' have to be understood: What is the content &amp; form of their belief? Why is that their belief, both historically &amp; practically? What effect does that belief have on their work? Can we see the world through their eyes, as members of their tribe? Etc.).

Now, this is not to say that had they accepted these issues climate denial &amp; creationism wouldn't exist--that would be absurd &amp; a vast over-estimation of the importance of a. abstract concepts within disciplinary practice and b. the power of academia outside generally.

Latour foresaw the sort of 'revisionism before the fact' that would plague modern discussions of everything from climate to fascism (http://www.bruno-latour.fr/sites/default/files/89-CRITICAL-INQUIRY-GB.pdf).

Acknowledgement that observer-dependence &amp; not-integrability may 'go all the way down', so to speak, in physics was a well trodden STS point (it's your discipline but I love this account of performativity in physics: https://www.dukeupress.edu/meeting-the-universe-halfway , this account of the phil of physics: https://www.amazon.com/Beyond-Measure-Physics-Philosophy-Meaning/dp/0198525362 &amp; this awesome joint work on physics &amp; philosophy: https://www.amazon.com/Singular-Universe-Reality-Time-Philosophy/dp/1107074061 &amp; finally this book: https://www.amazon.com/Interpreting-Quantum-Theories-Laura-Ruetsche/dp/0199681066/ref=sr_1_1?ie=UTF8&amp;amp;qid=1504813902&amp;amp;sr=8-1&amp;amp;keywords=interpreting+quantum+theories ).

Furthermore, my STS advisor is doing computational STS, where he is using big data batches of ancillary discussion &amp; discursive movement in an attempt to 'quantify' bias in scientific experimentations &amp; then is partnering with scientists in those fields to re-run the experiments accounting for this bias metric. This may turn out to be science fiction rather than science, but if it works, it'd be extremely useful to things like medicine &amp; tech. Another professor, from Undergrad, operationalized a Darwinian model of theory formation which automated pharmaceutical discovery. He couldn't develop it because the IP costs were too steep, so they left it at only one major confirmation &amp; publication, but the idea is still very cool.

Anyway, I hope that helps!