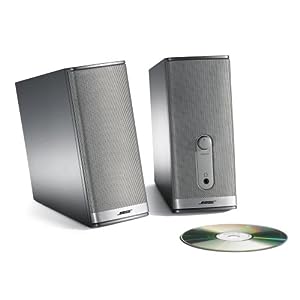 They're decent, to be honest I had a couple of these babies hooked up originally, but the tweeters were already a bit blown from my computer. I had my eye on the SP BS22s, they dropped down to $60 for the pair (which they do every few months) and I decided to jump on it. They're very comparable to the Bose, and those were great speakers for a long time.

Plain and simple, you're not going to be able to touch anything else in the $60 range when compared to these, they really do produce great sound. Set up a price alert with camelcamelcamel and in a few months you'll get these babies half price, totally worth it.

(I like the grills, as long as you can make the rest of your setup as aggressive as your PC)

I have included links to each product below the description for you to use.

For what l would recommend, it depends on your desk. Don't go with a glass desk, go with an IKEA Malm in white.
MALM DESK

You won't be getting a corner/L desk that is also standing. Plus standing desks are extremely expensive.

Then get RGB LEDs to go behind your desk and set them in blue for some aggressive looking accents.
LEDs (there are better ones)

For keyboards, go with the Corsair K65 Lux. It's compact design will keep your footprint on your desk down
K65 LUX

Use an extended mousepad, they are better
one example here

The Hyperx Stingers are cheap with great quality and a mic. They are amazing for the $50 price point.
Stingers

The BOSE Companion 2s are great speakers, but with a pricy. Recommend for casual use, not music production
Bose Companion 2s

I can't recommend any chair. Your chair needs might be different than mine, it depends on the person.

One more suggestion: paint one wall to match the color of the LEDs. It will make your room look/feel better.

Just posted a reply, but:

They are these bose speakers: https://www.amazon.com/Bose-Companion-Multimedia-Speaker-System/dp/B000HZDF8W

I would never buy them again as they are just okay. They are very nice, but were a gift a few years ago and retailed for about 100 bucks

Thanks for the feedback, looking for a good pair of stereo speakers at Goodwill, just have it going through the surround sound now. In the meantime would my PC stereo speakers make more sense than 5.1? http://www.amazon.com/gp/aw/d/B000HZDF8W?pc_redir=1406369327&amp;amp;robot_redir=1

Got a pair of these as a gift. They cost $100. Have worked every single day flawlessly with great highs and lows at every volume. Couldn't be happier.

My dad gave me these older Bose Companion 2 speakers from almost 10 years ago. I've used them ever since--excluding a short period of time where my old audiophile-esque roommate gave me a couple of his old speakers, which he said were good but honestly I wouldn't be able to tell you if they were or not, let alone what they were even called.

Anyway, since the go-to budget recommendation seems to be the Micca PB42X speakers, would those be a significant upgrade from what I already have (see above), or would it be more like a parallel move? Or even a downgrade? And if that's the case, does anyone have any other recommendations at around the $100 price point?

And also...considering everything I said above, should I be worried about DACs or Amps? I don't even totally understand them tbh, but should I consider investing in one or the other? Or both?

Here is the desktop version of your link

I'm fairly certain my speakers have an amplifier built in. They are the Bose Companion 2 Series II, I hear huge amounts of noise however even on lower volumes, would that be an issue with the amplifier in the speakers or my on board audio?

I'm looking to invest some money in improving the sound on my gaming PC, and I have no idea what I'm doing. Here is what I have now:

ASUS Xonar Essence STX - I was talked into buying this a year or two ago by somebody who knew a lot more about computers than I did at the time. Since then, I've been told so many conflicting things. Sound cards are irrelevant at this point, sound cards can still be good but mine is shit, mobo sound is more than enough, I need to move to a DAC. I'm totally clueless when it comes to sound, so I don't know what to believe.

Bose Companion 2 Speakers - Bose is a company that, again, I've heard a lot of conflicting opinions on but for $100 I've never really had any complaints with these speakers. The sound is pretty good for a smallish two speaker setup, and that was what I had to spend at the time.

I mostly play games, and I sometimes like to substitute my own music in the background while I play. Being able to swap to a headset on the fly is a plus, but I don't use my headset much and this can always been done on the software side of things. I briefly pondered this system, but my gut tells me that someone who knows what they're doing could likely put together something much nicer at that price point. Also, that system connects via USB, which would leave my sound card doing absolutely nothing, although that could be it's fate regardless.

I have about $500 to spend right now, and I'd be willing to save up a little more for something nicer if it'd make a good difference, or start a system that would benefit from additional components currently out of my budget.

I wish I could better express what I'm looking to get out of my system, but I don't really know enough about sound to say what I'm looking for. I'm pretty confident that my current setup leaves enough to be desired that it shouldn't be too hard to point me in a good direction.

I've used a bunch of different speakers with my PVMs and I prefer desktop computer speakers because a) they're compact, b) since they're compact, the speaker magnets are smaller and can be placed closer to my monitors without causing issues, and c) I think the frequency range of a smaller speaker better suits the games I play while still sounding way better than the speakers on any TV I've owned. I currently use a set of Bose Companion IIs that I bought cheap from from someone on Craigslist, and before that I used a pair of Creative Gigaworks T20 speakers which I also liked quite a bit.

I'm interested in those Bose Companion 2 Series II speakers, found some for 50$ and they fit the grey of my monitor. Would these be a good pick?

Cable management will be great soon, final setup will be online soon.

Also getting an MX Master 2s, would i still need an oversized mouse pad?

I know you said no to Amazon, but this is just to see a picture of them

They have a headphone jack on the front. Just plug in the heaphones into them when you want to use them.

I found these on a clearance rack at Target for $75.

I have the bose companion 2 speakers They look great and give pretty good sound. Not too small but pretty good. They recently came out with a series 3 but I haven't tried them yet.