Reddit mentions of Democracy and Political Ignorance: Why Smaller Government Is Smarter

We found 6 Reddit mentions of Democracy and Political Ignorance: Why Smaller Government Is Smarter. Here are the top ones. 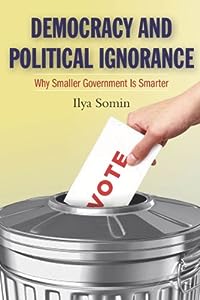 Found 6 comments on Democracy and Political Ignorance: Why Smaller Government Is Smarter:

Do you have examples? Because I know of quite a few critiques along that vein coming from conservative sources:

I certainly agree that (rational) political ignorance is a serious problem and a huge contributing factor to the current state of affairs. I was persuaded of that even before 2016, thanks in large part to the work of Ilya Somin (whose politics I don't share otherwise).

There's no viable alternative, though, at least not one I'm aware of. And if we are going to operate as a representative democracy, then attempting to reduce the franchise is unjust.

There's in interesting concept called 'rational ignorance' which in a political context means that for most people the cost of educating themselves about political matters outweights the potential value they might get from making more informed decisions. (By voting or campaigning for issues that are more in their interest.)

The volokh conspiracy has written about the topic quite a bit and one of their contributors actually wrote an entire book on it.

If you would like a good discussion of this topic generally, Ilya Somin (a law professor and very staunch Libertarian) has good book discussing why smaller governments are always better:

Note that "small" here refers literally to the size of the governed territory, not a metaphor for a limited Federal government.

You left out he's a republican who champions smaller government. Here's a link to one of his books

Yeah, it's just in my head that the average voter is so on top of things. They pour over statistics and spreadsheets day and night trying to formulate their opinion. They totally care more about public policy than their favorite TV show or that co-worker they want to ask out on a date.