We found 7 Reddit mentions of Filthy Lucre. Here are the top ones. 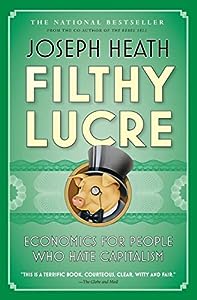 The title's a bit misleading; it delves into how proponents on all sides of the political spectrum royally screw up the economics behind what they're proposing. Written by a Canadian, although it does focus more on the "right / left" divide than you might expect given that, since it's also written with an American audience in mind. From a PhD whose doctorate is actually Philosophy.

Ahh, not heard of him. Well in that case you might want to acquire this book. It was my introduction to Mr Heath.

This blog post by Heath is probably my favourite effort by him.

As someone with an economics background who is very interested in this topic and has been for years. I want to share a podcast and a book recommendation that I think combined provide a solid explanation for this that are "accessible" for people.

The first is a 44 minute podcast with Claudia Goldin who is a harvard professor (economist) who has been working on the issue of the wage for years and is one of the top people on the issue in the world.
http://freakonomics.com/podcast/the-true-story-of-the-gender-pay-gap-a-new-freakonomics-radio-podcast/

The second is a book that has a chapter specifically addressing the phenomenon of pink guettos (female dominated fields + lower pay as women enter a field) which is what the article above is about. It's a book by a Canadian philosopher, Joseph Heath, that is excellent at explaining complicated economics concepts to a broad audience.

I think both of these academics are more interested in understanding the phenomenon than politics which is great for those who want less biased sources on the issue.

In it, Heath attacks with the fallacies of the right first and then moves on to the left by sharing with us the result of modern economic thinking. It's fairly accessible and written with left-leaning readers in mind.

I think they oversimplified for the sake of simplification. The explanation in the book went into more depth which I can not recall off the top of my head at the moment but the gist of it was that total supply and total demand are the same thing.

While they are not economists, Joseph Heath wrote a book called Economics for people who hate Capitalism which has been regarded positively by economists and also helped me to understand a lot of misconceptions I've had about the market economy.

Anyways I digress and am sounding like I'm a PR person for Heath.

Just so I am clear, you are saying is that despite total supply and total demand being the same thing in theory, its more complicated in reality?

The point you're missing is that if gov. didn't agree to respect private property rights, there would be no factory in the first place.If you're interested in this sort of thing, a good resource is http://www.amazon.ca/Filthy-Lucre-Joseph-Heath/dp/1554683742. If your interested in observing the 'private property creating wealth ' process, this is a good reference http://www.amazon.ca/The-First-Industrial-Nation-1700-1914/dp/0415266726