We found 18 Reddit mentions of NOW Supplements, L-Theanine 200 mg with Inositol, Stress Management*, 60 Veg Capsules. Here are the top ones. 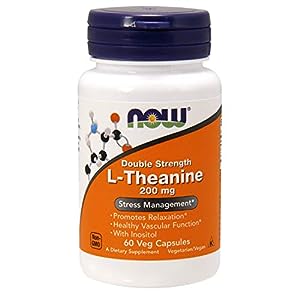 I was in a similar boat to you: sex with someone new was a mix of excitement, slight fear stemming from performance anxiety, and simply nervousness. I'm sure you can relate to the feelings of emasculation when a man can't be a "man" - we all know it's embarrassing to say the least!

I take adderall, which gives me a permanent dopamine boost all day, followed by a seemingly permanent deficiency at the end of the day and beyond; in addition, I'm exist in a state of "fight or flight" because of how adderall interacts with your systems and pumps adrenaline, always. My libido was absolutely shot and I had similar problems to you. I was getting pretty desperate. I tried a lot of stuff, did a lot of research, tried more things, but ultimately, most, if not all, of it went no where.

I found some forums after entering [ +"adderall" +"libido loss"] into Google (without the [ ]) and found a wealth of information after sorting through the shit. I'd searched before, had varied success, but this time was different - I took the time to dig, research, find, and learn!

Often users of prescription meds like adderall, opiates, or anti-depressants find that libido destruction is a primary side effect, an exceedingly common one; the good news, however, is that loads of dudes are fed up having the same problems and have taken their issues into their own hands - they guinea pigged their bodies, desperate for resolution! These dudes are basically martyrs, so bless them for their diligence and hard work!

The solutions I found were interesting.

I learned that people often take some combination of the following pills; for me, however, I just bought them all and have experimented with doses, frequency, and combinations.

Try taking theanine along with your coffee. It's an extract from green tea leaves that helps promote relaxation. That's why a cup of green tea, while caffeinated, won't make you as jittery as a cup of coffee.

Caffeine &amp; theanine is a very popular nootropic stack; while you get the energy boost from caffeine, the theanine helps reduce or offset any negative effects like jitters, increased heart rate, or anxiety. Typically people take 200mg theanine for everyone 100mg caffeine (average amount in a cup of coffee)

If the energy boost is why you're drinking coffee, there's also an alternative called NeuroGum. I've found it helpful when trying to cycle off caffeine since it's in smaller doses (40mg caffeine &amp; 60mg theanine)

I use this caffeine and this l-theanine. Couldn't say if they're the best on Amazon, but they work well for me and are well-priced.

There's a supplement called l-theanine that is shown to improve cognitive performance when combined with caffeine. It also seems to reduce the jitters and blood pressure changes that come with caffeine.

I take it daily about 30 minutes before I drink my coffee and I swear there's a difference.

If you don't already I highly reccomend you look Into L-theanine in addition to your caffeine.

It's a naturally occurring amino acid found In tea, but you can buy it separately in powder or capsule form.


Btw, how about those coffee poops?

I just buy this off amazon and it works quite well. It's not like trying to find a potent source of phenibut or piracetam, L-theanine is quite easy to get. Here is a good post on L-theanine's effects.

Also, it is found in tea and other things but not in a sufficient dosage enough to really cause any noticeable effects and is worth supplementing.

Ever tried l-theanine? You can get a bottle at GNC for about $15.

I just bought a bottle in the mail from Amazon. I've read people on here who use it to deal with the evening comedown. Since I'm giving meds another whack here soon, I wanted to have some on hand, as when I was on meds before I largely used beer to remedy the condition of which you speak. Cool on the brain, but counterproductive for sure. Not wanting to go down that path again.

I use these. I haven't tried any other kind, but these seem to work great.

You should look up info about L-Theanine. It goes together really well with caffeine. Helps reduce anxiety and jitters from caffeine.

As someone who also suffers from anxiety, and still does. Here is what's been really helping me out:

..it says something about "suntheanine"

Is this decent L-Theanin? https://www.amazon.com/Now-Foods-L-Theanine-Veg-Capsules-60-Count/dp/B000H7P9M0

As mentioned below...action is your best bet. Doing more stuff and being around people helps a lot during depression.

Another thing that I recently found out about that works amazingly well is : L-Theanine

I originally got it because I drink a lot of coffee/caffeine, but it works amazing for stress.

If you take anything with caffeine, consider lowering your intake.

Try some green tea as an alternative. It has compounds that will mellow you a bit without making you drowsy (not sedatives)

You can actually get this stuff in pill form. L-Theanine is just about the only thing that stops my racing mind and bouncing leg :P then again I have very acute ADHD, but a lot of people couple a pill with their coffee to take the edge off, or use it for making presentations or general anxiety/over-energy management

Be careful! Can help on some peoples but can cause panic attacks! It's not for everybody. (I have to try too)