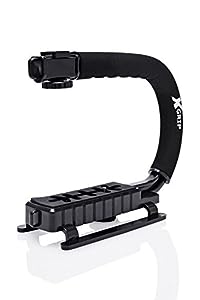 I picked up everything off Amazon (other than the camera which I bought 2nd hand off Craigslist):

If that's not good enough?

i'd avoid in the future the shots like 0:55-1:15, try and get the full body in the shot rather than lower half. generally speaking, the rule of thirds is a pretty good thing to stick to when film making: http://en.wikipedia.org/wiki/Rule_of_thirds
Buying something like this helps a lot when your skating and filming: http://www.amazon.com/Opteka-Professional-Camcorder-Stabilizing-Handle-/dp/B003PBB4ME/ref=sr_1_1?ie=UTF8&amp;amp;qid=1367859643&amp;amp;sr=8-1&amp;amp;keywords=steadicam. Also, mess around with colour correction, it goes a long way in improving the quality of your footage once you get the hang of it. I'd also keep practising syncing your footage with your music. generally making sure things happen (cuts/transitions, effects, or someone sliding, for example) on the bass kick and high hats is a good rule to stick to. I'd start messing around with whatever effects and transitions you have in your editing software and see what else you can sync to the audio which looks good. just don't over do it on the effects, most music videos only have 4 or 5, it gets too confusing and inconsistent otherwise. hope this helps!

This was well edited, but the amateurish shots let it down - that first pan looked like a dolly slide and I got excited!

A few tips for your friend:

What is the result you'd like? Good quality training montages? Or just quick and dirty training clips?

For quick videos, you can get a cheap setup with these items:

OTG USB cable if you're hurting for storage:

You can plug in a flash drive and keep that in your gym bag.

If you want to do high quality videos, go with a good smart phone or camera such as a decent camcorder, and a shotgun mic to get rid of the tinny sound.

If your camera doesn't have a shoe mount:

Speaking from a filmers perspective, you got a nice setup so far. However, you want to remember to keep the skater in the center of your frame, and not head or board cut.

You shouldn't do night shots unless you have a really good floodlight or something along those lines because otherwise it will not look as good as it should and its most likely more difficult for the skater.

Try not to have such big space between tricks in lines, and if you have to, speed it up a bit or add in some flatground tricks.

Your lens needs to be clean at all times, so bring a cloth to the park or something.

The music shouldn't take over the whole audio track, so use some light stuff and keep it up enough that you hear the pop of tricks.

If i were to recommend a grip, i would say the X-grip but im not sure how that works on a t3i, so google around.

On one final note, tell your friends not to scream and yell when someone lands a trick. I know you're having fun, but that ruins the shot imo.

First off, that hill isn't that fast and there are no corners you need to slow down for. Second, I've done a lot of skating with Cal and Matt and have the utmost confidence in their skills. Third, I put the camera on one of these things to get a better grip and used one of these to automatically take a photo every second; so I was just pointing it and hoping for the best. Finally--this is key--I have pretty good insurance on my camera gear.

If you already have a tripod, you can try spreading the legs as wide as they go and holding at the top of the tripod for some stabilization. Film Riot shows off another technique.

Another option might be a coldshoe handle, which I saw for $25 on Amazon, or if you're afraid of damaging the camera hotshoe, you can get something like the Opteka X-GRIP. A slight step up from that would be a cage with two grips on the sides and a top handle, or something like a HaloRig, which goes for $150.

For better stabilization and to fly through the scene, at $200 or below, you're probably looking at a counterbalanced stabilizer, similar to a Glidecam or Steadicam Merlin. Though I wouldn't recommend this alone for hiking, as you arm will quickly get fatigued from all the weight; you'll want to a shoulder rig for added support and better stabilization.

If you can budget around $600, you're getting into gimbal territory, like the ikan Beholder MS1 or which would give you a much lighter active stabilization rig compared to counterbalanced systems.

I do a lot of travel as well have tried out various methods of stabilization over the years. Personally, I think a gimbal is the way to go. It's lighter and way easier to setup than a counterbalanced stabilizer, though the counterbalanced stabilizers usually will give you more fluid motion (gimbals can be pretty robotic with movement, especially with panning left/right). I've gone on hikes with my Nebula 4000 Lite gimbal, and my arm hasn't felt tired at all, probably because I had the rig on an R-Strap and let it hang when not in use.

Keep the focal length short (which you will anyway for Vlogging). The kit lens has OIS as well. In addition, it's not a bad idea to crank the shutter a bit. Something like this will likely help a lot with stability and rolling shutter: https://www.amazon.com/Opteka-Professional-Camcorder-Stabilizing-Handle/dp/B003PBB4ME/ref=lp_196573011_1_11?s=photo&amp;amp;ie=UTF8&amp;amp;qid=1479254844&amp;amp;sr=1-11.


If you really need IBIS, then yea, look at the GX85. Don't get a powershot. The G7 is amazing and for $500 it surpasses many cameras that are twice the price.

Shooting hockey, you're definately going to want a decent tripod. Something like this would probably serve you well: https://www.bhphotovideo.com/c/product/1273964-REG/manfrotto_mvkbfr_liveus_befree_live_video.html

For a tripod, the key thing to get smooth pans is a fluid head. I've heard good things about this one for light cameras (under 10lbs), although I've not personally used it.

I understand what you mean about still cameras being awkward for handheld shots. My experience is that even camcorders can be difficult because they're so lightweight. You could look into rigs like this or even this to give you better control.

Get the biggest memory card you can afford. With Prime Day starting in a few hours, I have no doubt memory cards will eventually be featured. 128GB, Class 10, UHS-1 (or 3), V60 (or 90). Larger numbers are better.

If you really want to get into video, think about an inexpensive rig.

As a beginner, look at the $30 end. I have an ebay version of this. This one gets a lot of positive reviews and is only $20.

Finally, sound. If sound is important to what you are shooting, think about an external recorder. Internal mics are a huge compromise compared to even an inexpensive recorder can do. For $100 the Tascam DR-5 is more than adequate.


Ok, now having said that, the only thing you REALLY need to buy is the memory card. Everything else is optional. You can hand shoot with natural light and the internal mic and get great video. Its just a lot harder. Hard is not impossible, it just takes more practice.

Google around and you will find a ton of tutorials on how to shoot video with a DSLR. A few things that stuck in my mind:

Shoot 10-1. If you want a minute of video you need to shoot 10 minutes and edit it down.

Pan slowly. Go as slow as you can. Now go slower. Its amazing how "fast" any movement is when you are recording it.

Shoot low and away. Literally the opposite of what you want to shoot a still image. You need to get the camera away from your face because your breath is loud and will cause shake.

Shoot early and late. Start shooting BEFORE the event you want to get happens and keep shooting through that event. If you dont you wont have any edit room. Its not like you are buying tape/film so shoot as much as your sensor can handle.

Hope this helps! Im in Colorado Springs next week and you reminded me to pack my rig! Thanks!

Oh man I am definitely artsy for life...

I do photography and videography and have been eyeing this [camera stabilizer] (Opteka X-GRIP Professional Camera / Camcorder Action Stabilizing Handle- Black https://www.amazon.com/dp/B003PBB4ME/ref=cm_sw_r_cp_api_YFOyzbHQ2RTFV) to use for videos, especially during the week of GISHWHES. GISHWHES especially is all about bringing people together and making people's days with random acts of kindness and absurdity and art. I absolutely love it!

I've got this rig http://www.amazon.com/Opteka-Professional-Camcorder-Stabilizing-Handle-/dp/B003PBB4ME/

It's really lightweight and makes it easy to move while filming. There are several of this sort of camere handle, this is just a cheap one and I'm not sure if and how this would work with a follow focus.

I don't know a lot about tripods so can't give you any advice on that but for moving shots the camera handle works great.

well i am getting http://www.amazon.com/Opteka-X-GRIP-Professional-Camcorder-Stabilizing/dp/B003PBB4ME/ref=dp_cp_ob_p_title_1 as i will be filming/shooting a lot of skate boarding. I of course will also just be shooting every day things. And all my photography kit currently includes is :- Cannon EOS 550D, 18-55mm lens, the photographers eye (book)

I have one of those for my dslr setup. Looks like this https://www.amazon.com/dp/B003PBB4ME

&gt;It's like people who prefer to listen to vinyl because of the aesthetic. I just like doing it, even though it's more inconvenient and lower quality.

And this is why I hate it.

Stop being a stupid hipster and film in HD. At least vinyl has the advantage of being true analog-analog recording, SD is like using a cassette instead of a CD with none of the upsides (i.e. HD is more portable/durable/etc.). If you were filming with legit film (8mm, 35mm, etc.) I could respect that (if you didn't go bankrupt trying, lol).

It's not so much the actual pixel resolution (I will fight to the death that lower resolution cameras can have a far superior image quality, there is far more to a camera than how many pixels the sensor has, anyone that has seen 1080p Arri Alexa footage against most 4K footage understands), it's the fucking interlacing and 4:3 ratio. Everyone is viewing on a 16:9 progressive scan screen nowadays and combing artifacts on a progressive scan screen gives my eyes cancer. Even when you digitally de-interlace, it still only looks "OK" and is still the wrong aspect ratio. May as well film with a cell phone in portrait mode if you're going to forego standards that much.

Also, everything you said about HD cameras is your own fault/problem. There are tons of fantastic ultra-portable light weight cameras out there either through name brand GoPros or the numerous chinese knockoffs like the Firefly 7S that actually offer amazing quality and resolutions up to 4K with far better low light and contrast than a VX will ever do. They come with built-in fisheyes and a host of digital options, some including excellent digital gyros that will smooth out even a jittery filmer's hand (though the gyro does require cropping some of the viewing angle, so it's a filmer's call which is best for the situation). All you need is a $20 caddie and it's just like holding a VX.

VX's were overrated even back in the 90's/early 00's, but now they're just a dinosaur. It became this ridiculous circle jerk for no reason and it never had any merit whatsoever. You may as well record your next music album with this.