We found 4 Reddit mentions of Overcoming Depersonalization and Feelings of Unreality (Overcoming S). Here are the top ones. 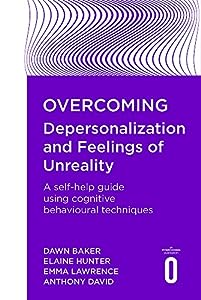 I'm glad to hear that dp/dr didn't seem to bring you down through all your time of having the condition. Do you remember when you began to disassociate? did you have a panic attack or did it seem to come on slowly? dp/dr is a very strange illness that affects people in different ways.

you mention wanting to run and hide away and sleep it off. I've been there before, and capitulating to that won't help - trust me. you gotta get out and do things that you enjoy in spite of how anxious you feel. at first it's extreeeeemely difficult, but you'll get there, anyone can. a lot of sufferers ruminate and try to come up with the 'answer' to this spiritual crisis that we find ourselves in, but really, you can't 'think' your way out of dp/dr. you gotta get on with your life. it will become more bearable, hang in there buddy.

check out this video. I don't so much like this guy as he's always trying to sell you his 10-hour DVD thing for an extortionate amount of cash, but his youtube vids can actually be quite useful. But try not to get bogged down in reading about dp/dr too much, it's helpful to reassure yourself that others suffer from it and they recover, but having it constantly on your mind all the time will make it worse. STAY AWAY from dpselfhelp.com (I'm deleting my account there soon), unless you plan to read the 'recovery stories' section, but again, different things work for different people. You will find most people who recover from this combine 'acceptance' and 'distraction', that is, they accept the feelings of dp/dr and let the anxiety be without fighting it (let go of that internal struggle against the way you're feeling and just let it be) and that they distract themselves by engaging in social activities (socialising with friends has helped me enormously over time) and doing things they normally enjoy. for me its making music, i'm trying to make an EP at the moment which takes a lot of work because there's a lot of processes involved (writing, producing, recording, mixing etc) and i can take my mind off of how i'm feeling. the more i do this, the more distant DP becomes. sure i have some relapses and some weeks are better than others, but generally i'm starting to come out of it.

this suggestion is a bit of a long shot, but it might work, or be helpful for anyone still reading. you mentioned that you've always been a sensitive person. People with DP/DR tend to be like this. Would you describe yourself as caring, creative and somebody who tends to overthink things a lot? are you generally quite anxious, depressed and lethargic, find it hard to get out of bed? do you by any chance have quite youthful facial features? if so then you might want to look into zinc deficiency/copper toxicity. I recently found out that i may be zinc deficient, and that a 'copper personality' that some nutritions are starting to become aware of these days (characterised by the traits i mentioned above, and caused by a build-up of copper in the brain) may be linked to dp/dr. i've been taking zinc supplements and i think it's helped me tremendously. obviously it's not going to work for everyone, but look into the 'copper personality' and copper toxicity if you can relate to the questions above.

The difference between DP and DR, is basically that depersonalisation involves estrangement from one's internal self, and derealisation involves estrangement from the outside world. DP sufferers feel detached from their emotions (they may describe feeling 'numb'), from their thinking process (they may describe feeling as if their head is 'full of cotton wool' or that their mind has gone 'blank') and DR suffers often feel as if the world around them appears fake or unreal, like they were in a dream or a movie or something. They may also report that people seem cartoonish and strange. However they tend to cross over. I suffer mainly from DP but i get episodes where i feel like I'm in a dream-world all of a sudden. DP/DR suffers are often obsessed with existential, philosophical, metaphysical and hypochondriacal (health) issues, such as the meaning of life, how the mind works, whether or not the world is real (solipsism etc) and whether they have a health issue like brain tumours or permanent damage to the brain (as most suffers get drug-induced DP/DR, usually from smoking cannabis or taking LSD/MDMA). DP/DR does not arise as a result of brain damage, or at least there's no scientific link. It's generally accepted to be just an anxious state of mind brought on by trauma (a lot of people's dp/dr is onset before/during/immediately following a panic attack) and it's reversible. There have been people who have suffered this condition for 20 or so years and have recovered (but don't scare yourself into believing that you'll suffer like this - it really depends on the person and a lot of these people had no idea what they were even suffering from, and once they learned about it, recovery soon followed - which should be the case for you now that you're aware of dp/dr) which shows that it's not a permanent condition at all.

sorry for my incoherent waffling and such but i hope this has given you some insight, and i think you'll recover soon.

In the meantime this book is great for anxiety/panic (and even involves a section on obsession and 'feelings of unreality'). it's called 'hope and help for your nerves' and really helped me through my initial anxiety. I would highly recommend getting it on audible as an audiobook as this woman has a very soothing and reassuring voice. It's from 1962 but it's amazingly relatable and i can't stress enough how much this woman has helped me. Another, more clinical book worth getting is this one which also helped me. It was written by a group of psychiatrists in london who dedicate their study to Depersonalisation Disorder, that is, the disorder in itself, not as a symptoms of another mental health issue such as PTSD or depression. it contains reassuring information about how they understand the illness works.

TL;DR: just keep going, don't let dp/dr stop you from doing what you love, do those things regardless of how anxious/freaked out/unreal you feel. get busy, let the anxiety wash over you like a wave. stay away from dp/dr forums and don't worry - you're not going to go crazy.

Hmmm, I see. Well it sounds like exercise is worth it, still.

By the way, I recently bought this book and it seems to be v helpful - https://www.amazon.co.uk/Overcoming-Depersonalization-Feelings-Unreality-Books/dp/1845295544 - would recommend and if you use the free kindle app you could start reading as soon as you bought it!

I've done some more research into this subject now, and I found a book that addresses it from yet another angle. For your interest:

"'The first of its kind, this self-help book will offer guidance, help and solace to the many sufferers of depersonalisation disorder.' Daphne Simeon, Depersonalisation and Dissociation Program, Mount Sinai School of Medicine, New York Depersonalisation disorder can make you feel detached from life and many people describe feeling 'emotionally numb' or even as if their body doesn't belong to them. It can be a symptom of another problem such as anxiety, depression, post-traumatic stress disorder and, particularly, of panic disorder, or of an illness like epilepsy or migraine. It can also occur in its own right and/or as a side effect of certain drugs. "
https://www.amazon.com/Overcoming-Depersonalization-Feelings-Unreality-Behavioral/dp/1845295544