Reddit mentions of Plato, and the Other Companions of Sokrates (Socrates) Volumes 1-4

We found 1 Reddit mentions of Plato, and the Other Companions of Sokrates (Socrates) Volumes 1-4. Here are the top ones. 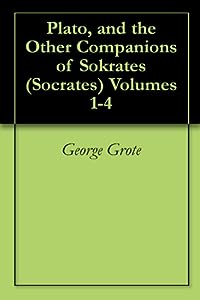 Found 1 comment on Plato, and the Other Companions of Sokrates (Socrates) Volumes 1-4:

&gt;I'll grant that it's not rock solid by any means (little in philosophy is), but there's general consensus on the matter about the overall sorting strategy. The battles are typically fought over whether certain problematic dialogues belong in one group or the other.

I don't know how analytics treat Plato, but in the Continental world there's a lot more battling going on. Which texts are authentic, for instance, is still hotly contested. That "sorting strategy" is also hotly contested. But I'm open minded. If you were to pick one source or author who best defends the merits of this division, who or what would it be?

Oh Jesus, I'll have to wade through my old college notes and get back to you. I seem to remember this old thing having some compelling information. (It also defends the claim that, contrary to what many contemporary classics professors argue, there are very few apocryphal dialogues. Which is cool.)

&gt;Fine, granted. But then it seems misleading to me to claim that Socrates was the foremost external influence on the Church; one should claim, to be safe, that Plato was. If you're concerned with literary character then credit the author and creator, not the fiction itself.

I thought it was clear given that the Socrates in question is the Socrates of the Euthyphro, the literary Socrates. I'm not sure what we're arguing about here, we agree that it's Plato's writings that attracted early Christians and not the historic Socrates.