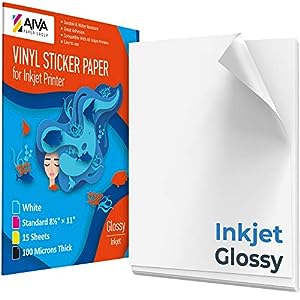 Thank you so much!

I've only been at it for just over a month now, so I'm no expert by any means, but here's what I found works best for me:

this paper
UV spray
For Cutting
[I use this printer] (https://www.amazon.com/dp/B0798D6XBM/ref=cm_sw_r_cp_taa_.neCDbCF0XZKP)

I started out using regular sticker paper with a cold-press laminate(it was the cheapest route), and they looked and felt really nice...at first. they didn't hold up against weather and water for very long. The laminated part was water proof, but it would get wet under the sticker, and eventually break the sticker apart. They were also hard to make without them getting all scratched up before you even cut them.

I like that vinyl paper a lot. There are a lot of options for it, but that is the most cost effective, and so far, it's been really fantastic. The paper is water resistant, so water doesn't get underneath the sticker and break it apart like the other ones. After I print a page, I spray it with that UV spray. It just gives a nice texture that I like, and keeps them from fading in the sun. I ran a sticker through the dishwasher before I sprayed it. The sticker part held on phenominally well, the ink ran tho. I haven't tried it with the coat, but I don't see myself washing many stickers.

After the spray dries (a couple of minutes), a run it through the Cameo 3. I started out with a Cricut. I actually like the Cricut machine better. It's designed to just work. However, the software is garbage. It's web based, and even worse, it automaticaly arranges your artwork on the page to be printed and cut. That sounds nice, but 99% of the time, it wasted more than half the page. I was throwing out so much paper. There are some workarounds I found online, but they were tedious, innacurate, and not worth the effort. I do not reccommend the cricut until they get their software in line. The Cameo takes a little more fiddling with, but it's more custumizable, and I arrange stickers on the page how I want.

My printer is just that low-end Epson. It works great actually. The only thing I would suggest is getting a printer that you can side-load. I feel like the the paper getting bent through the printer isn't good for the paper, and makes the printing inconsistent (also, it probably has to do with being a cheap printer too). I plan on upgrading, but I already bought a bunch of ink, and I want to get through that first.

MOST IMPORTANTLY, have fun!

Sorry about the novel!