Reddit mentions of Risk: The Science and Politics of Fear. Dan Gardner

We found 12 Reddit mentions of Risk: The Science and Politics of Fear. Dan Gardner. Here are the top ones. 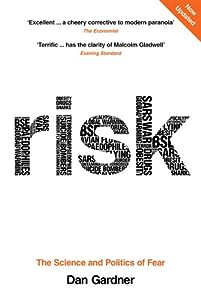 Found 12 comments on Risk: The Science and Politics of Fear. Dan Gardner:

If you still dont get the point of this post, you should try reading this:

I'm the opposite. I'm horrendously impressionable and will take alot of what I read on the news at face value despite how obviously over hyped and sensationalist everything is. I also change my mood rapidly depending on how people I respect think about an issue. For example, my dad told me in the car once how bird flu is a major threat and we should all be worried about it. After that it grew into a massive thing for me until it got the the point where I was so scared of the Avian Flu that I had to go on beta blockers, just to be able to function normally and go back to school.

This coupled with the fact that I'm prone to anxiety attacks really affects me.

As I've got older I've found I've got better, and don't get worked up quite as much about things I read in the news, I found this book helped massively, it taught me how the mind deals with media scares and taught me to disconnect myself with what I read, as well as thinking about things more rationally.

The excellent book Risk looks at the amount of money spent on preventing terrorism compared to how much terrorism actually affects us. It's fair to say that terrorism has a pathetically tiny affect on our lives.

What happened at September 11 was not actually that remarkable on a world scale. More people die around the world, than those at the world trade center, quite frequently due to all kinds of things that happen. The American government and the media actually won the war for the terrorists and solidified the victory by repeatedly showing us the same images over and over whilst constantly telling us how much of a threat terror posses to the average person. The reality is that the average person has a very minute almost non-existent chance of being affected by a terrorist attack. If America and the media had dealt with it appropriately we would not be living in the same fear ridden world we skulk around in today.

EDIT: This book actually quotes the statistic mentioned by OP and is a good reference for anyone who is interested in cutting through the crap that is thrown at us by the marketing, government and media machines.

If you want more information on this, and other biases, then a great book is Risk: The Science and Politics of Fear by Dan Gardner. I read it recently, it really is very very good.

Some suggestions to consider:
Non-fiction
Risk: The Science and Politics of Fear
The Master Switch: The Rise and Fall of Information Empires
Fiction
Little Brother
Ready Player One
::

I'll try to buy ye a copy of something in the next day or two.

Highly recommend this book - http://www.amazon.co.uk/Risk-The-Science-Politics-Fear/dp/0753515539 - one of those rare books that really, truly changed my outlook on the world.

Am reading Henrietta Lacks ATM and really liking it.

God Is Not Great - Christopher Hitchens

How We Know What isn't So - Thomas Gilovich

Tricks Of The Mind - Derren Brown

How to Lie With Statistics - Donald Huff

Bang on, I couldn't agree more. I have to say I used to be one of those people who didn't understand Risk, until I read Risk by Dan Gardner a few years ago. It's a great really approachable book for the laymen that covers exactly what you were talking about in a really sensible way. I haven't seen the study you mentioned, but Dan talks in the book about something similar, different examples of policies and their effective per-life costs. I seem to recall that based on the costs of safety systems, the life of an astronaut was valued somewhere around $100 million, whereas from life insurance policies or the industrial safety area a life was valued around the $5 million mark. By contrast as you say, recent (2000's era) environmental policies were valuing a life on the order of a billion dollars, which is wrong because of the alternative uses that the resources that billion represents could be put to.

I don't know how we fix this... It seems to me that the median person understands and accepts risk at a personal level, but when things become abstract and costs are hidden then rational ignorance kicks in and there are just demands for more and more safety.

Part of this has to do with the nature of risk perception. Rod Adams has a great interview on his podcast with Peter Sandman about how Nuclear power runs foul of people's risk perception, and how that leads into Outrage. Rod wrote a short Crash course in outrage management, but the podcast is a lot better, if you have an hour to listen to it.

On a similar vein there is also the book RISK by Dan Gardner which explores why we, as a species, are terrible at risk assessment. It covers the whole gut/brain implication.

&gt; Read this for more of the same

That's very interesting. I read a pop-psych book a few years ago called Risk, which covered a lot of the same area - about how our evolved intuitions and rules of thumb fail us when we imagine the world outside of our own localities.

It also covers the idea of media narratives, which as you say play massively into this effect: the media covers a novel or particularly scandalous story, but now they have a template, into which they, as professional pattern spotters, can just lazily plug any minor story which even vaguely fits. So people run away with the idea that there is a new epidemic of terror attacks, for example. Our brains aren't capable of comprehending a world of 7 billion people. Incredibly unlikely things happen all the time, but if there is a media narrative in place, every one of those stories might get coverage.

Technically correct. People who buy 10 lottery tickets a week are 10x more likely to win the jackpot than those who only buy one. This means those who buy 10 a week will only need 4.5 million weeks (on average) before they win. The'll have a 50% chance of winning once in 1081 lifetimes as opposed to the 10810 lifetimes it'll take someone who buys one a week.

It's hard to over-emphasise how unlikely it is to be killed by a terrorist attack in this country, or indeed pretty much any country. I believe someone worked out that if 9-11 happened EVERY SINGLE WEEK, it would still be safer to take domestic US flights than make the journey by car.

I can't recommend this book enough. It really does a good job of explaining the statistics and psychology behind our unwarranted fears.