We found 1 Reddit mentions of Silence: A Christian History. Here are the top ones. 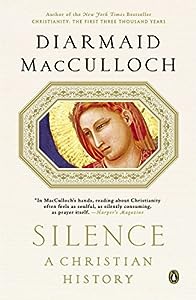 It's obvious that they wouldn't identify as specifically "queer." Nonconforming sexuality clearly existed, however. Diarmaid MacCulloch cites a provocative example within the Oxford Movement in his Silence: A Christian History, and working with categories of silence is a perfectly legitimate element of historical research these days.

To be terribly honest, I'm not especially interested in the rest of your post. I don't worship a God who isn't interested in liberation, and I don't believe God is known outside that context of liberation.

When all is said and done, it's no skin off my nose if I don't convince you of anything. I don't think I will, to be honest. Really, none of this is about you, which is the whole point of my OP. You aren't a part of my church, so while I think you're being an impediment to God's work in your own, my beef isn't with you.

&gt;I suggest looking at the cross for how to fight against things.

Don't you dare suggest I don't know what the cross is.