Reddit mentions of Square One: The Foundations of Knowledge

We found 2 Reddit mentions of Square One: The Foundations of Knowledge. Here are the top ones. 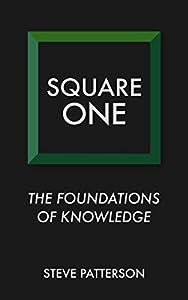 Found 2 comments on Square One: The Foundations of Knowledge:

Also, might be worth a Deke nomination, but I'm not gonna spend the time to make sure unless I also get paid for looking at his book. Oh and he also has a blog.

Some quotes from that page:

&gt; I think most ethical discussions are framed incorrectly. Ethics is about intention, not actions or consequences. I am drawn to ethical nihilism, with one exception: love. Nothing matters except for love

He has also written on free will and doesn't know what compatibilism is, so I don't have high hopes. Oh, and then there's this:

&gt; In my own research, I have discovered a consistent truth: the mainstream conclusions in any field of thought are wrong. And to my surprise, a great deal of confusion comes from mathematics. Modern irrationalism – the lazy acceptance of contradictions into one’s worldview – seems to stem from mathematical errors made around the turn of the 20th century

He has also solved the liar's paradox.

Edit: Also, calls himself an Anarchist(read: Ron Paul fanboy) and is surprised that nobody takes Austrian economics seriously.

Though honestly it's a little tedious and drawn out. It's not expensive though and it's very short. Steve Patterson has a youtube channel as well, so maybe it could have been summarized in a 10 minute video rather than book format.