We found 20 Reddit mentions of The Catcher in the Rye. Here are the top ones. 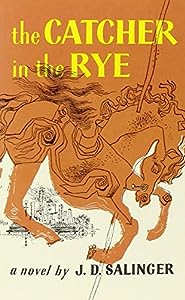 Found 20 comments on The Catcher in the Rye:

I think I found a book you'll love

I think voice and tone are the main markers of YA, and those are incredibly hard to nail down.

The Curious Incident of the Dog in the Night-time, The Ranger's Apprentice, My Sister's Keeper, Miserere, The Midwife's Apprentice, The Catcher in the Rye, the His Dark Materials trilogy, Ella Enchanted, Catherine, Called Birdy, Fangirl, the Mistborn trilogy, Girls Like Us, various Tamora Pierce books, and Incarceron are all books that could be considered YA in some markets, but not in others (some are marketed up as adult literature, others down as children's books).

If you went solely by "characters being teenagers for most of the book" to define YA, (and even threw in caveats like "coming of age" and "no explicit sex") you'd get titles like Wild Ginger, The Poisonwood Bible, Balzac and the Little Chinese Seamstress, Into the Forest, or The Year of the Flood on the YA shelves, possibly disappointing a lot of people who aren't interested in such a dreary world view and often a pervading sense of melancholy (which is perhaps coming from the slower pace, even if things are happening all the time?).

Endings seem to play a role too: those adult examples were all unhappy ends that could make the characters' entire journey seem pointless. YA doesn't necessarily shy away from the unhappy ending (The Fault in Our Stars, The Girl of Fire and Thorns, and Feed come to mind), but there's always a spark of hope and the books were more upbeat up until that point.

YA doesn't necessarily shy away from cynicism or ennui and/or despair either: there was plenty of that to go around in The Hunger Games, Looking for Alaska, Graceling, Delirium, and The Archived, but those tended to be character traits coming from character voice rather than the tone of the narration itself.

Bonus MG vs YA distinction: Does he liiiiike her and maybe kiss her or marry her or are they dating or secretly lusting?

tl,dr: Gut feeling. I know it when I read it, and I don't always agree with the official designation on the spine.

The most boring one I've been forced to read was Catcher in the Rye.

&gt; But they are all fucks.

"Quit calling me a kid, I'm nothing like those books! I'm allowed to think everyone's a big gay phoney!"

It's $12 CDN, super cheap and you can read up on why Holden is not supposed to be a role model.

Fact: I feel like an outsider. None of that angsty teen "Nobody understands me!" BS either.. I went through that and it passed. I'm more complacent now.. but life and people blow my mind every minute of every day and the only people who agree with me seem to have a laissez-faire attitude about it. I was born with a cape or something, because I feel the need to right every wrong and balance the world.

Song: Gettin' Jiggy With It

Book: Rather than tell you my favorite, I'll say two favorites which I think sum up my personality.. Catcher in the Rye by JD Salinger and Hitchhiker's Guide to the Galaxy by Douglas Adams

Wisdom: Be happy and not at the cost of someone else's happiness. Also, standing up for what you really believe in is important, more important is being willing to say you've been wrong, or un/misinformed and being open to change. You can be strong in your beliefs and also willing to change. They aren't mutually exclusive. On that note, do what I do and try to get as informed as possible before forming an opinion. ;)

You know what strikes me as a commonality in your list here? Narcissistic protagonists. With very few exceptions these are all novels of profound selfishness. The quintessential narcissist is Holden Caufield, but recommending The Catcher in the Rye feels too easy. Instead I'll give you Lux the Poet, by Martin Millar. It's got Angels, Punk Rock, the Brixton Riots and a good dashing of cocaine.

The Catcher in the Rye is a pretty good gateway book for more literary fiction.

1984 and Animal Farm will probably appeal to your SF tendencies.

If you want something more contemporary, maybe try The Amazing Adventures of Kavalier and Clay. It has to do with comic books...

Catcher in the rye

I have four. I believe they are books that everyone should read.


To Kill a Mockingbird


The Catcher in the Rye


Each one of these have changed the way I see the world. They all have amazing stories for the perspective of characters I normally would not have been able to identify with.

The Catcher in the Rye - A novel by J. D. Salinger.

This has the root of something interesting in it, but it's not there yet. There's a lot to like here - the Isabelle interaction, the self-hate after it, the bit with the sister/parents...

...but I'd like to see the character doing something besides moping. The moping can flavor the piece, but I don't think it should be the piece. Remember that page 1 is where the audience first meets the character and gets their first impressions; if you want them to engage with the main character and/or the story, you might want to consider giving the audience something to root for. No one loves a navel-gazer.

Holden Caulfield is a famous example, and a lot of people don't like him. But look at the personality you get from the opening page:

There's nothing happening here, but a) at the end of page 1, there's a promise made ("I'll tell you about some madman stuff..."), and b) the attitude is so attitudey that it resonates whether you like the kid or not.

tl;dr: By the end of your page 1, what are you doing to engage the audience's attention?

because molten lava cakes are yum

You should take some time to think this through. Why not read a book to calm yourself down?