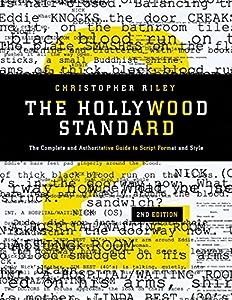 I'm floored that you wrote this at 14. Bravo OP, it's pretty funny stuff. My only critique/advice would be regarding formatting (how to label characters speaking with subtitles/voice over etc...)

That's the stuff that can be really small or seem unimportant at first, but it pays off to learn now rather than when you get a chance to pitch your work and a producer kicks you to the curb simply because you didn't label something correctly.

My girlfriend bought me this guidebook a few years ago when I started learning how to do this, maybe you'll find it useful too: Hollywood Standard

Final note, it's VERY impressive you came up with something like this at your age. Do not stop, it's making me both incredibly jealous and driven to continue my work. Best of luck brotha!

There are a TON of books out there about writing television and comedy in particular and they can be really helpful, but the best way to learn is really to read scripts. Second to that is what I and my colleagues like to refer to as daring to fail (just write your story), if you have a great story, structure can always be taught and worked out.

If you're working on writing a spec, the best thing you can do is collect as many copies of scripts for the show you're planning to write a spec for and use them as a map - those scripts will inform you about how that particular show is structured because even though there are industry standards, all shows are unique. Depending on length some shows might be 5 acts and a teaser (if it's a one-hour) or 3 acts and a teaser (most half hours), or any other combination of acts and teasers and kickers.

When you're reading these scripts pay close attention to the act-outs to see how the writers typically like to end each act and where the beats fall.

As for books, Show Me the Funny is a good resource. The Hollywood Standard is a staple. Writing the TV Drama Series is one of my favorites, and even though you're looking to write comedy, it is an excellent resource. I haven't read Inside the Room, but I've heard great things about it and it's on my list, so it might be worth a look.

One other thing I will point out is that when you're looking for books that are specifically to be used as resources for writing television, I would steer clear of most books published prior to 2009. I only say that because television more than film has really evolved in a very short amount of time and you want to make sure you're getting the most up to date information.

Other resources to take a look at would be Jon August's Blog, Jane Espenson's blog (though she hasn't updated it in quite awhile), Ken Levine's blog, The Aspiring TV Writer, and The Artful Writer.

I also HIGHLY recommend subscribing and listening to the Nerdist Writer's Panel with Ben Blacker. It's chock full of amazing advice, tips, and great stories from a ton of current television writers.

Hopefully some of this will be helpful! Good luck in your writing endeavors!

The screenwriting section is a blundered mess. Yes they are correct in the information presented but give no advice on proper use. Parentheticals for example. Use sparingly.

The book, The Hollywood Standard, is a good read. I'd say it's more for those have no clue how to structure. They do a good job of explaining. Also read some of the screenplays to the films you enjoy. It helps to see how they write.

I'd just like to point out that I'm not a film maker in any way shape or form so it would be nice if somebody could verify what I'm about to say.

I've been watching a lot of videos by FilmmakerIQ.com on Vimeo and have learned a lot from them. Anyway, they have a list of recommended books that I haven't checked out yet but would like to. I'll just list them out here:

Save The Cat! The Last Book on Screenwriting You'll Ever Need

Master Shots: 100 Advanced Camera Techniques to Get an Expensive Look on Your Low-Budget Movie

Grammar of the Shot (Media Manuals)

Rebel without a Crew: Or How a 23-Year-Old Filmmaker With $7,000 Became a Hollywood Player

Cinematic Storytelling: The 100 Most Powerful Film Conventions Every Filmmaker Must Know

The Hollywood Standard has been invaluable to me as an amateur writer. It's all about format and structure. Can't recommend it enough as a beginner.
https://www.amazon.com/dp/1932907637/ref=cm_sw_r_cp_apa_-HUlzbAP0X3Z4

Also one called the Writers Journey I think? Can't remember. Helps you learn how to create characters and story.

Some may tell you to read Save the Cat. That book teaches you how to write a formulaic screenplay that big budget movies follow. It's also often pointed at as the reason movies are so predictable and also as causing real storytelling to be sucked out of movies these days. If you're doing this to become a good writer with substance and thinking of it as art then I would avoid it.

You need to write! Write and write. It’s a discipline. Sit down every day and write. Get published. Write more.

Use your job to save up and purchase your own computer, a copy of Final Draft and The Hollywood Standard. And don't forget a Mission Impossible leather jacket hoodie to wear while you're writing. :)

Start a movie review blog. Write articles for IMDb or Rotten Tomatoes. Join or create a screenwriter's group in your area. That's what sites like Meetup.com are for. Review each other's work on a monthly basis. That kind of thing is great for motivation and camaraderie but at the end of the day you still have to sit down and write until you have a product to pass along to those who would buy, publish or produce it. Copywrite all your work.

“If I waited for perfection, I would never write a word.”
― Margaret Atwood

We all have to do that job of just getting the bills paid until we work our way over to what we enjoy. You need to build up a small portfolio of your own writing you can share to score that creative writing job. Or a portfolio of screenplays to start getting leverage for a writing contract, etc. Watch Limitless again and remind yourself, you already know what to do and how to do it. Good luck!

Watch your favorite movies and break down the structure. Define the external and internal goals that move the plot forward. What is the movie saying (theme)? Strive for great subtext in your dialogue. Get in a scene as late as possible and leave as early. Use Final Draft. Don't put camera angles or shots in your script: don't direct!

O.C. means OFF CAMERA. It basically means the character is nearby but out of view from the camera. For example in another room speaking through the wall. If you want a good guide on format you can buy a book like
The Hollywood Standard: The Complete and Authoritative Guide to Script Format and Style (Hollywood Standard: The Complete &amp; Authoritative Guide to) by Christopher Riley


Other than that I would recommend reading A LOT of screenplays and then looking up on Google each thing you don't understand.

There's a few ways you could do it. The previous commenter's suggestion was fine. For really basic stuff like this, I want to recommend The Hollywood Standard. It's good to have handy.

They have to go thru so many scripts a day - if something looks remotely different than the standard format, it goes into the trash can.

This book is very helpful.

The best thing to do is take a class so you get all the basic info and guidance and get sent on the right track. Too many bad screenplays out there. Don't be one of them.

If you specifically are talking about format check out
http://www.writeyourscreenplay.com/formatting-bootcamp-nyc/
and
http://www.amazon.com/The-Hollywood-Standard-Complete-Authoritative/dp/1932907637

I'm not aware of sites, though I'm sure they exist, but I'll throw in a vote for buying a book. There's a book called The Hollywood Standard and you should get it. It's like The Elements of Style for screenplay. You should also use Celtx or similar because it makes the formatting mega easy.

The reason I say get the book is because the format is the form in screenplay. When someone reads the screenplay, that reader is tuned into what the formatting is signifying in a visual way. Even if you use the free formatting programs, a lack of understanding of the way in which the format is to be used will hold your screenplay back from realizing it's potential and your vision for it.

We use the formatting specified in the Hollywood Standard v.2, hence all the CAPS and such. Not that it's the end-all-be-all of screenwriting formatting, but we prefer to stick with just this one written guide. I know there are others that recommend other techniques. Any suggestions are certainly welcome!

Everything else (formatting-wise) we've found to be consistent with scripts on the market today (Re-Up by Ian Schorr, Rothchild by John Patton Ford, Autobahn by F. Scott Frazier). All that said, we're trying to make this readable for YOU. So anything to that effect that you find jarring we will examine further.

Thanks for the feedback. You rock!

The Hollywood Standard thoroughly covers everything you ever need to know about formatting.

Reddit has removed your comment as the URL is too long. Please replace it with this ^[1] shorter URL. Then we (the mods) can look to approve it.

Have a nice day!

I recommend you get a physical book instead, that way you'll always have it plus it's super useful. Get The Hollywood Standard 2nd Edition by Christopher Riley. It is an ESSENTIAL for beginning screenwriters. Everything you need to know about formatting is here.

For a broad and comprehensive overview with less technical information, go for Screenwriting 101 by Film Crit Hulk, along with any of his wonderful articles.

For the technical specifics of modern screenwriting, The Hollywood Standard by Christopher Riley is solid, though it's really not that complicated and I wouldn't worry too much. Just use a program like Celtx to do your formatting and you're sweet.

If you want to blow your mind with dogmatic but largely correct info on the structuring of effective stories in general go for The Art of Dramatic Writing by Lajos Egri, written about playwriting but incredibly relevant.

I also recommend you learn the basics of filmmaking. I personally believe it's vital to properly writing screenplays (rather than generic writing dressed in screenplay clothes). The stuff's got to be shootable, designed for a reasonable budget, and more importantly, suited to the film medium itself.

A great book for that is On Film-Making by Alexander Mackendrick.

I also highly recommend In the Blink of an Eye by Walter Murch, written about editing and invaluable. Editing is the essence of film as we know it, so it's in your interests to know it intimately.