Reddit mentions of The Meaning of It All: Thoughts of a Citizen-Scientist

We found 2 Reddit mentions of The Meaning of It All: Thoughts of a Citizen-Scientist. Here are the top ones. 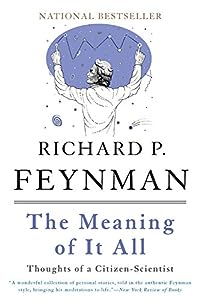 Found 2 comments on The Meaning of It All: Thoughts of a Citizen-Scientist:

Since we're exchanging information and admittedly subjective opinions and worldviews,

1. I try to be ethical, tolerant friendly and polite to people.

My parents and grandfather are/were really good, decent folks who instilled some values in me, but generally let me do my thing and led by example (usually.)

2. I think organized religion can be an interesting cultural phenomenon (I find Catholic high mass or Buddhist ceremonies pretty impressive), and it's nice if someone can take solace in it, but it's not my bag of tricks.

My parents forced me to engage in church activities and religion classes when I was a child. They later confessed that this was designed to demystify it for me, as they figured I was smart enough to draw my own conclusions; they were worried that, when I became a teenager, I might go for weird religious shit as a form of protest or search for identity. I think they would have rather had me try pot or announce that I'm gay.

Note: It worked pretty well. Unfortunately, it also kind of put me off the idea of unquestioningly following rules in many cases, such as corporate employment, which does sort of put a damper on career opportunities. I blame my parents.

3. Anyone can believe/not believe what they want to, as long as they don't hurt anyone and don't try to convince me I'm wrong.

4. I also have trouble believing that it just ends.

What's out there? No fucking clue, but I am 35, I have lived in 6 countries on 4 continents, have been to 39 countries (40 this summer, whoo!) and while I've never seen any sort of satisfactory proof that there is a deity / an afterlife / mystic magical bumfuckery around us, if what, not being a scientist myself, I read from Richard Feynman about the scientific method and the nature of doubt is true, then given all the admittedly anecdotal and possibly-rationally-explicable-but-who-knows weird shit I have seen in my life it would be irresponsible and illogical for me to say "no, there's nothing" with any kind of conviction.

And if any of the /r/atheism types want to argue with me, I humbly request that they refer to #3.

One of my favorites by him. I forget if it contains this lecture, but I would highly recommend The Meaning of It All: Thoughts of a Citizen-Scientist for anyone with an open mind and a critical outlook.

Then again, I would probably recommend all of his books to almost anyone :P