Reddit mentions of The Pleasure of Finding Things Out: The Best Short Works of Richard P. Feynman (Helix Books)

We found 6 Reddit mentions of The Pleasure of Finding Things Out: The Best Short Works of Richard P. Feynman (Helix Books). Here are the top ones. 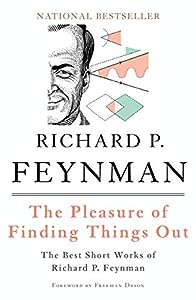 Found 6 comments on The Pleasure of Finding Things Out: The Best Short Works of Richard P. Feynman (Helix Books):

The Pleasure of Finding Things Out: The Best Short Works of Richard P. Feynman is a good place to start with him.

&gt;how does he propose to deal with the problem of required specialization?

Unfortunately he passed away in 1997. I don't know exactly what he would say but I can say the following:

Although it's a utopian ideal the act of striving for such a scenario is good in itself, right?

It's ultimately about radical, systemic change involving shifting neoliberalism to a more left-wing/anarchist society. Once this culture changes the supposed need for the banking model goes away.

In this manner, specializing loses its cultural significance. Since we were little kids the question "What do you want to be when you grow up?" has been pummeled into us by a culture that begs us to be a worker for supposed economic growth. But how many people actually go into a field of their major? People switch careers all the time too. My point is that learning how to critically think, like a degree in philosophy, is in fact more valuable and applicable to society and to the self. It would be fantastic if American public schools actually taught logic and critical thinking to all levels of students. Philosophy teaches students to read and think logically and critically, effectively communicate and persuade, form rational arguments, calmly debate, detect logical fallacies, decipher fact from fiction, think scientifically, and understand the scientific method -- which many science majors even fail to grasp.

Meanwhile, the culture of capitalism has permeated throughout so much of society that to be successful has become associated with students submitting to the banking method of education and sacrificing the humanities for STEM fields. The assumption that there are a lack of STEM majors is in fact a myth propagated to get cheap labor so corporations can get higher profits. Even if it were true it isn't that black and white; students can still study humanities and participate in activism while getting STEM degrees. People like Dr. Michael Wesch do a great job spreading Freire's message in his anthropology 101 classroom as well as on YouTube for people to discover on their own.

By getting students addicted to reading, passionate about science (Feynman!), and aware of the true causes of unprecedented levels of inequality resulting in widespread poverty and oppression, students will be inspired and empowered to start hobbies in literature, science, and social justice instead of TV, excessive hedonism, and other soma-like adventures.

There are in fact methods to teach STEM fields in a way congruent with Freirean ideology as depicted in Rethinking Mathematics. Basically, use social problems as examples. Additionally, as Vi Hart illustrates in her videos, mathematics can be taught as an art for students to play with and learn by creating.

I'm also a fan of the Khan Academy's practice of getting students to read outside of the classroom and discuss inside the classroom. This makes the teacher-student time congruent with Freirean ideology while sustaining student information and skill acquisition.

Hiya! I'm a recent physics/computer science graduate and although I can't think of any super cool handmade options off the top of my head, there are some physics books that I find interesting that your boyfriend may enjoy. One solid idea would be just about anything written by Richard Feynman. Reading through the Feynman Lectures is pretty standard for all physicists, though there are free versions online as well. There are a few others, such as The Pleasure of Finding things Out and Surely You're Joking Mr. Feynman. There's also a cool graphic novel that recounts the events of his life called Feynman by Ottaviani. If you're not familiar with who this guy is, he is a colorful and concise orator who won a nobel prize in physics. His biggest contributions were in nuclear physics and quantum computation, and his quirks make his explanations of these topics very interesting. The Feynman Lectures are more formal, while his personal books are a mixture of personal experience and explanation.

&amp;nbsp;
Something else that I typically gift all of my friends who are problem solvers interested in physics is the book Thinking Physics. This book is great for developing some high level intuition in every field of physics (mechanics, optics, thermodynamics, electricity and magnetism, quantum mechanics, etc.). This book is great because it's broken into small digestible sections that build your knowledge as you solve more of the questions (solutions are given).

What I like about the DEFCON post is that it is about methodology and goes into detail about the thought process in solving it. Breaks the puzzle into the steps needed to solve.

Maybe that is too much work for something here, but it was a really fun to read and think about both the creator of the puzzle and the person hunting for a solution. Solving the mystery is the most interesting part and what you learn along they way.

Made me think of this book called

"The Pleasure of Finding Things Out" by Richard Feynman

Here is a timeline that was posted in r/mrrobot that someone put a lot of work into :

*also I think it is helpful for all who want to participate in the game to keep that master list of what was solved as a sticky at the top so as more people come in they have a better idea where to start.

**also also u/u_can_AMA is fantastic at organizing information. You should take a look at his/her posts or maybe enlist in your efforts

For more pure gold like this, read the pleasure of finding things out, Surely you're joking Mr. Feynman and What do you care what other people think

If anyone is interested in more Feynman, I suggest checking out The Pleasure of Finding Things Out: The Best Short Works of Richard P. Feynman (links to Amazon). He had a fascinating outlook on life and learning.