We found 4 Reddit mentions of The Queen's Poisoner (Kingfountain Book 1). Here are the top ones. 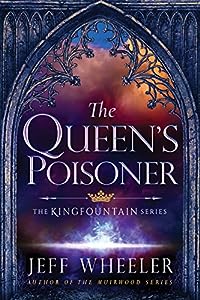 Some of my favorite books available on Kindle Unlimited:

The Half Killed by Quenby Olson


Here are some that I haven't read, but have heard mostly positive things about:

The Palace Job by Patrick Weekes

A Warrior's Path by Davis Ashura

Valley of Embers by Steven Kelliher

Faithless by Graham Austin-King. He also has another series, The Riven Wyrde Saga, beginning with Fae - The Wild Hunt

Ours is the Storm by D. Thourson Palmer

Path of Man by Matt Moss

Threat of Madness by D.K. Holmberg

To Whatever End by Claire Frank

House of Blades by Will Wight

Path of Flames by Phil Tucker

Wolf of the North by Duncan M. Hamilton

Free the Darkness by Kel Kade

The Cycle of Arawn Trilogy by Edward W. Robinson

Dawn of Wonder by Jonathan Renshaw

The Crimson Queen by Alec Hutson

The Queens Poinsoner by Jeff Wheeler

Rise of the Ranger by Philip C. Quaintrell


Here are some older fantasy and sci-fi books that I enjoyed:

Witch World as well as other good books by Andre Norton

Swords and Deviltry The first volume of Fafhrd and the Grey Mouser by Fritz Leiber - Many of the tropes of the rogue/thief came from this legendary duo created by Leiber. And it's worth noting that Leiber actually coined the term Sword &amp; Sorcery. This collection contains 3 stories, two average origin stories for each character and the final story is the Hugo and Nebula winning novella "Ill Met in Lankhmar" detailing the first meeting of Fafhrd and The Grey Mouser.

Swords Against Darkness - A '70s S&amp;S anthology. It has few stinkers, a few mediocre stories, and a some really good ones. Poul Anderson and Ramsey Campbell both have awesome stories in this anthology that are well worth checking out. For some reason, there were quite a few typos in this book, it was slightly distracting, but may have been fixed since I read it.

The Best of C. L. Moore by C. L. Moore. I read this earlier this year and I absolutely loved it. The collection is all sci-fi and one Jirel of Joiry story, which is her famous female Sword &amp; Sorcery character. I was suprised by how well her sci-fi stories held up, often times pulp sci-fi doesn't age well, but this collection was great. Moore was married to the writer Henry Kuttner, and up until his death they wrote a bunch of great stories together. Both of their collections are basically collaborations, although I'm sure a few stories were done solo. His collection The Best of Henry Kuttner features the short story that the movie The Last Mimzy was based on. And, if you are into the original Twilight Zone TV series there is a story that was adapted into a memorable season 1 episode entitled "What You Need". Kuttner and Moore are two of my favorite pulp authors and I'm not even that into science fiction, but I really enjoy their work.

Books books books, and not a bookmark in sight!

That was a great book! I can't wait for the sequel. Are you looking for those sort of 'young boy coming of age' type of stories? What else have you read?

I really enjoyed The Queen's Poisoner by Jeff Wheeler (the first in a new series). It's central character is a young boy who has to go live at the King's castle as a hostage to ensure his parents don't turn traitor. Like anything I've read by Jeff Wheeler, it's well written and I enjoyed it a lot.

Another suggestion would be the Codex Alera series by Jim Butcher. I loved this series and I wish Butcher would write more high fantasy instead of just urban fantasy.