We found 1 Reddit mentions of Truth and Other Enigmas. Here are the top ones. 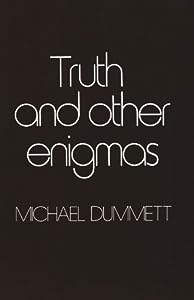 My work is on theories of truth (and other, related topics). There's certainly a lot of literature in this area that's worth reading that isn't presupposing deflationism. In fact, even as a staunch anti-deflationist I don't think it's really fair to claim that much work presupposes deflationism; it's just a popular, well-argued for view.

The Nature of Truth: Classic and Contemporary Readings - This volume is the biggest and best collection of articles on the metaphysics of truth available. It's a bit out of date in certain places, but there's no better option.

Chase Wrenn - Truth - This is a nice short introduction to work on the nature of truth. Skip the last chapter if you don't want work on deflationism.

SEP article on truth - Sections 1-4 are on standard theories of truth apart from deflationism.

To be honest, the best place to look for work on this issue is the deflationists. A lot of those papers are included in the Nature of Truth volume above, although as I noted some update is needed given nearly two decades have passed.

One useful general overview is Gila Sher's recent PhilCompass piece here on substantivism about truth. Sher's own view is whatever, but it'll be helpful in pointing you to other places if nothing else.

The obvious place to start here is at the beginning, with Dummett's work.

You should also look at Dummett's primary work. The easiest jump in spots will be his "Truth" and "Realism". Most of his important early papers are available in Truth and Other Enigmas.

You should also look at Hilary Putnam's later work, starting from about Reason, Truth and History. Putnam calls his view "internal realism" but it's basically a more American-pragmatist influenced version of Dummett's anti-realism. Putnam got too caught up in the stupid American use of "realism" as an honorific (and "anti-realism" as a pejorative").

Perhaps the clearest development of epistemic constraint is in Crispin Wright. See his masterful Truth and Objectivity, especially Chapters 1 and 2. Yes, even though Chapter 1 is on deflationism you will find the first half distinguishing types of realism/anti-realism paradigms important for the work in Chapter 2. If you want, you can skip the second half of Chapter 1, but Wright's argument against deflationism is one of the most powerful in the literature.

I'm biased here, but I would also suggest you look at the literature on truth pluralism. A good starting point is the SEP article. The first truth pluralist position is Wright's Truth and Objectivity linked above.

For a clearer and more contemporarily influential view, see Michael Lynch's Truth as One and Many. Lynch's view is not the same as Wright's, despite what some (including Lynch at some points..) will tell you, but it's similar enough and much easier to jump into.

The pluralist movement is important to your questions because it involves a commitment to substantivism at its base, a commitment to epistemic constraint in some domains and a commitment to the view that there's more to truth than mere platitudes like the one you mention about the T-schema (this is most clear in Lynch's book).

Hope this helps. Feel free to ask any follow up questions.