We found 5 Reddit mentions of Your Name [Blu-ray]. Here are the top ones. 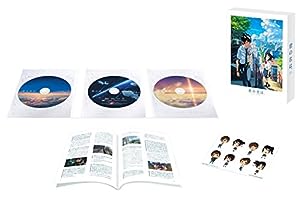 Found 5 comments on Your Name [Blu-ray]:

Amazon too, with English subtitles included.

They do have them up for pre-order, but the collector's edition is currently sold out. Note that the release date is August 4th instead of July 26th.

They do have the regular special edition up for pre-order, however.

Decided to skip this sale so I could place my preorder for the three disc version of Your Name.

It's been the absolute best film I've seen in 2017 and I can safely make the trade off of 4 50% Criterions for this one film. Everything I'd be buying would be a blind buy so it would be up in the air but this is one film I'm truly in love with.

I know I should wait for the cheaper American version but dammit, I need this now. I think about this film often and I listen to the soundtrack on the regular.

To everyone participating, enjoy your films!


Edit: other weird thing; I'm at exactly 50 Criterion after 7 or so years of actively collecting and part of me doesn't want to ruin that. Especially since my wishlist is an odd number...