We found 14 Reddit mentions of Alvin, Draft-Matic Mechanical Pencil, 0.5mm. Here are the top ones. 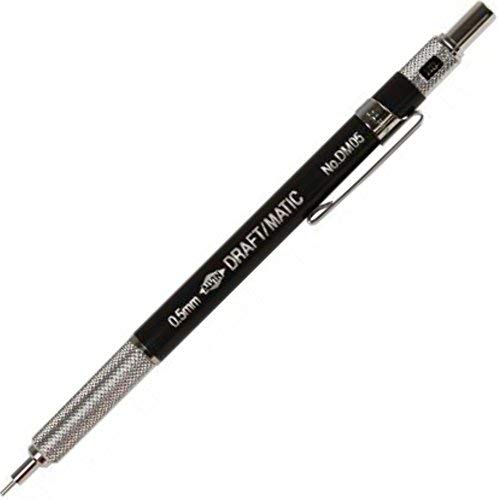 View on Amazon.com
A PROFESSIONAL'S CHOICE - Alvin has been the professional's choice for drafting tools and drawing supplies for over half a century. We are known for our wide selection of high quality tools at a fair price.COMES WITH QUALITY LEAD - You no longer need to worry about breaking the lead end while writing or drawing; lead color black or gray, lead size is 0.5mmDESIGNED FOR PROFESSIONAL - Knurled stainless steel for finger grips, rotating lead degree windows and cushion point to making writing control comfy; mechanical pencil, pencil body and components made of steel.EASE AND EFFICIENCY - The built-in eraser makes it a lot easier to erase mistake in your drawing or write. It also comes with a cap to avoid losing the eraser and getting it dirty.CONVENIENT AND SMART STORAGE - The set comes with a black leather pencil pouch to keep them in so you can avoid losing them; synthetic leather, black, stitched.
Related categories:
Office Products Office & School Supplies Writing Supplies & Correction Supplies Pencils Mechanical Pencils

I've been using an Alvin Draftmatic pencil for more than 15 years.

It's a $70-ish pen. Realistically, that's equivalent to two nights out, if you go to college in a big city. Or, if you're in a rural area, that's three nights out.

When I saw this post, I thought that I'd found the rare college kids that values a relatively obscure hobby enough that he or she makes it a financial priority, and thought it was both endearing and admirable.

For what it's worth, I spent all four years of engineering undergrad using a $30 drafting pencil. I used it for another three years after graduation, until the plastic portion of the barrel literally fell apart. I then bought another, identical pencil but for only $10 this time and use it almost daily. That's cheaper than a 12 pack of the standard 0.5mm mechanical pencil, which I guarantee you won't last you a year and, sure as hell, won't last you 7 years.

Assuming you don't get obsessive about it, having good writing tools is much cheaper, in the long run, than buying disposable tools. When you have a quality tool that fits your needs perfectly, you grow to love that tool and, believe me, you won't lose it. It becomes almost like your phone - you always know exactly where it is. And, again trust me, until you've used a writing tool that perfectly fits your needs, you don't realize how much you're missing out on. Writing suddenly becomes a joy and taking notes, completing assignments, or writing essays on exams often ceases to be just an annoying task you have to get out of the way and becomes something you almost look forward to.

No joke, it can really be a life changer.

In his defense fountain pens are awesome!

I bought the Alvin draft-matic after doing some research, and it feels very well made, though slightly different in style. I haven't had it long enough to endorse it as BIFL, but it's another option to consider.

Check out the Alvin Draft/Matic. It comes in lead sizes from 0.3mm up to 0.9mm.

No rubber grip, all metal. The only downside of the pencil is the metal tube that the graphite feeds out of it, it is susceptible to being bent. So long as you're not a kid in highschool throwing all your stuff around you'll be fine.

I bought a 0.5 mm Alvin on a whim sophomore year in college. I almost returned it because I didn't realize how expensive it was until I got home, but I decided to give it a shot.

It's been about eight years and I actually had to search for "good mechanical pencils" on Google because the writing had completely worn off and I couldn't remember the brand. Highly recommended.

As everyone else has said, its not the tools but the sketching techniques blah blah blah.
But as for my personal preference, I love sketching using ballpoint pens. I use these .2mm staedtler pens (http://www.amazon.com/Staedtler-Drafting-Ballpoint-Superfine-92405BK2/dp/B003UGTN4A) for my quick underlays/mapping out perspective/etc. Then I go in with a cheapo bic pallpoint for finish up the edge lines and make it pop, sometimes even a thick sharpie.

For pencils I use these Alvin drafting pencils (http://www.amazon.com/Alvin-DM05-Draft-Matic-Mechanical-Pencil/dp/B007VTP62U/ref=sr_1_5?s=office-products&amp;amp;ie=UTF8&amp;amp;qid=1381378716&amp;amp;sr=1-5&amp;amp;keywords=drafting+pencil) and love em. When I feel like using wood pencils I go with a black prismacolor verithin, and on another note I'd highly advise buying an electric pencil sharpener.

When I'm going to make a nice marker page, I'm gonna usually lay out the underlays on marker paper using my ballpoints, then trace over it on a new sheet of marker paper using a fine liner (unfortunately the ballpoints bleed terribly with markers...if they didn't they'd be the perfect tool) but yeah basically just trace it over and put in the value that way you have a nice line drawing with good placement of value...you can use the underlay to show highlight spots, deep shadows and whatever else.

I've always just used BIC pencils or these guys. If you wanna go a bit fancier you could try a drafting pencil