We found 1 Reddit mentions of Bigger Secrets: More Than 125 Things They Prayed You'd Never Find Out. Here are the top ones. 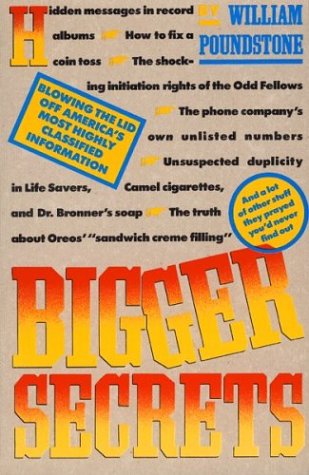 Yes, and it has been done. For example, the Merory formulation is said to be very close to the actual composition of Coca Cola- for which there have been a number of reconstructions.

Poundstone discusses the formulation for KFC in his Big Secrets book, and I think it's his Bigger Secrets that discusses Coke's formulation.

Due to some "capture" of an employee early in the history of the respective companies, Pepsi almost certainly knows the precise formulation for Coke. Otherwise, it is possible to chemically and microscopically reverse-engineer the formulation of many food products. For example, the "secret recipe" for KFC can be examined by microscope and Fourier-transform infrared microscopy to determine the composition of individual particles. (The guys at McCrone are said to be some of the best when it comes to microscopy; old man McCrone used to have its microscopists study samples from anything from elephant dung to beach sand in order to broaden their knowledge base.)

Also note that many companies have labs to determine if knockoff products violate any patents. My understanding is that Procter and Gamble has a vast analytical lab to do just that. I read an article in the Wall Street Journal a few years back noting the major ink producers for bubblejet printers did the same thing.