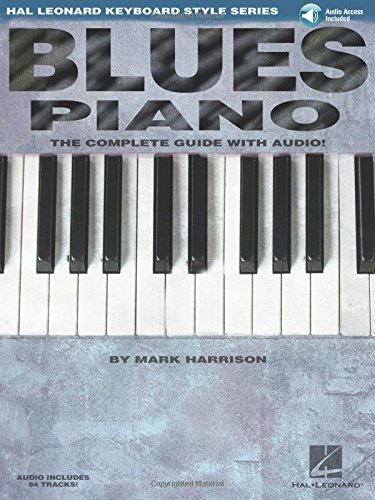 View on Amazon.com
Blues Piano Keyboard Style Series (Book/Online Audio)Ever wanted to play the blues, but weren't sure where to start? Blues Piano will teach you the basic skills you needFrom comping to soloing, you'll learn the theory, the tools, and even the tricks that the pros useAnd, you get seven complete tunes to jam onListen to the online audio tracks, then start playing along
Related categories:
Books Arts & Photography Music Musical Instruments Pianos

The thing is... this is relatively tame and easy from a complexity standpoint. It's almost entirely just 3 chords with some decoration. It's basic blues.

It's why I come across as so infuriated about academic music education. There's so much time spent so deep in the weeds on nuance and details of playing and extremely period specific theory stuff, but none on this.

I mean, people were shitting on Kyle Landry for his technique the other day. I get it... it's not as polished and nuanced as yours, but most of the people bitching literally couldn't improvise a simple diatonic melody of simple block chords. Nobody cares how fucking flawless your technique is when pulling out some Prokofiev.

At that point it's a dick measuring contest. You're literally trying to score points with the other 0.1% of musicians who are trained enough to even be able to discern the tiny differences.

I try to put it this way to pianists. Can you hear the difference in the gauge of string a guitarist is using? Can you tell exactly what kind of amp or pick they use? Probably not. But I assure you they agonize all day about it and at the end of the day it doesn't matter. People are too worried about the tiniest things that almost nobody can hear... except their well trained peers.

Instead of investing all of that time on such nuance (that you'll never use ever... with maybe one small caveat), learn some other styles. Learn theory beyond what it was 200+ years ago. Learn how to do this relatively simple stuff.

People often think I'm shitting on Kyle Landry when I say what he does isn't complicated. I mean... it's not. That's not a slight against him. I'm usually just trying to tell people it's not a magical skill and it's not out of their grasp. I think Kyle's ability to execute so well so consistently while doing what he does is very impressive. When you consider that a ton of people with his same level of experience can't perfectly execute 4 minutes of music they've been playing for months yet he can play for hours at a time largely improvising and make few mistakes while covering the ones he does make. He's good. It's just that what he does isn't complicated.

Neither is what's been played in this video here. There's no reason things like this shouldn't be covered in a music degree, particularly for a performance major... because as I often gripe about, skills like this are actually used in performance way more than whatever level of Chopin perfection you might reach.

Hell, just a basic semester long class comprised of being able to do basic triadic comping of basic melodies with a dash of playing by ear toward the end would open up a whole new world to most pianists. Literally just being exposed to that and developing a base level awareness opens so many doors of realization about how to learn more styles. If people even just got the foundation, they could begin building upon it.

But why is academic music like it is? Because your professors weren't taught this stuff either. Their degrees in piano didn't prepare them to perform. If they can land a teaching job they teach what they know... and that's not this. The cycle continues.

For you, maybe check out this book. It's almost certainly not the best book on the topic, but it gives a pretty good survey of a lot of the ideas used across myriad blues styles. It's likely by working through it a bit your eyes will be opened to how some of this is put together and then when you listen back to something like this performance you might think, "Oh... he's just doing X"

Think of it like a Christmas tree. You can decorate one a million ways, but when you look at it, you still recognize it as a tree. It's just a tree with slightly different decorations, but the foundation is the same. Heck most of them probably have the same basic decorations of lights, balls, and tassel and to your eye, they largely look the same with just varying levels of ornamentation.

Blues music (and lots of other styles) are just like this. The problem is, you can't even recognize the tree yet. But once you can, everything else seems a lot easier.

Mark Harrison's books are pretty good - maybe start with this one then move onto the jazz piano one. If you can read music to a basic level, and are happy to come back to theory points later if you don't fully get them the first time round so as not to get bogged down or discouraged, you should find a lot to learn in there.

I've really enjoyed the Hal Leonard Keyboard Style Series, which covers a wide range of styles. These books will start from the basics of each genre from past to present. Each book comes with a cd of each exercise being played so you can hear how it is supposed to sound as well.

Got caught in the spam filter - it's back now :)