We found 2 Reddit mentions of Carmen Astrologicum. Here are the top ones. 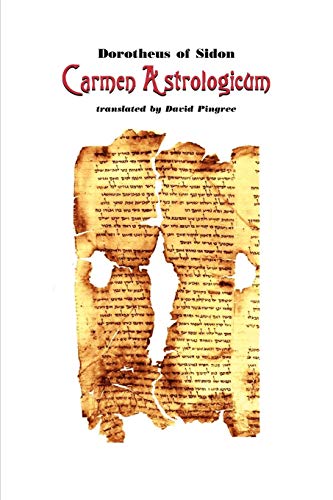 For a general astrology, it's difficult to find anything that can surpass the level of detail of Guido Bonatti's Book of Astronomy. It can be quite overwhelming, so it's very nice that Benjamin Dykes (the translator) divided it up for us in such a way that students can either follow along in the order they were originally or can jump around to study the material they are most interested in.

Temples of the Sky by Deborah Houlding is a great book about the whys, what's, and hows of houses and house systems.

Essential Dignities by Lee Lehman is a good read, but a bit heavy on statistics.

For horary astrology, of course William Lilly's Christian Astrology, but Bonatti's section on horary is also very good (the only thing it lacks are not enough examples). I would personally put the Book of the Nine Judges at the top of the list since it is a combination of medieval horary texts pulling from sources like Al-Kindi's 40 Chapters and Sahl's On Question as well as several others. That being said, of course Masha'allah's On Reception is a great, quick read as well.

Bonatti also has a section about electional astrology that is really good, but the best book for this is probably going to be Dorotheus's Carmen Astrologicum since the later electional texts are all pretty much based around it anyway. That being said Benjamin Dykes did a translation called Choices and Inceptions which combines the works of Sahl's On Elections, Al-Imrani's The Book of Choices, and Al-Kindi's The Book of the Skilled. So with Carmen Astrologicum, Bonatti's On Elections, and Dykes's Choices and Inceptions you pretty much have the entire tradition of the electional branch.

Natal astrology is where my sources start to lack. Clearly Christian Astrology Book III is a good read, but I've recently gotten into the Persian Nativities series and I'm interested to see how the other books in that go as well. There is also Morin's work on Solar Returns which I would recommend.

You need to dig out its Hellenistic-Latin-Arab roots. Here's a list of the most important classics: