We found 6 Reddit mentions of Contragel Green Contraceptive Gel 60ml - Natural Alternative to Spermicide. Here are the top ones. 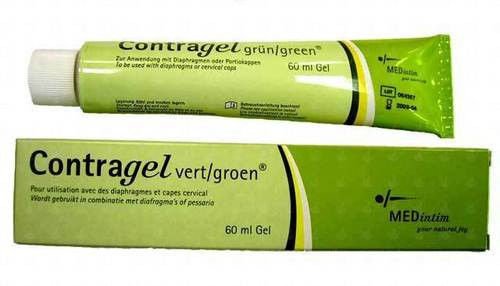 Spermicide is only effective alongside a barrier such as a condom or, more often, a diaphragm

Caya is a one size fits most diaphragm. You can buy it on eBay from Canada or the U.K., or get a prescription here in the US

Contragel is a vegan, natural spermicide

Honey, lactic acid, and neem oil is an effective homemade spermicide to use with a diaphragm or cervical cap, but it isn't vegan.

Before deciding to TTC I had my paragard removed due to the unpleasant side effects and was planning to switch to the above! I actually have the unopened diaphragm lol

If she's willing to get crazy about it, she could track her ovulation and only need to use the diaphragm 5-10 days out of the month.

All of that being said, I chose this method because I was OK with being in the % of women this method fails for. This method depends heavily on the user doing everything correctly and she might be better off with Paragard or condoms for that reason.

Because of your history of vaginal itching, I’d be super careful with spermicides. I never found one that truly worked for me. Nonoxynol-9 is a common irritant in most spermicides. Look for ones that say “natural”, like the Contragel Green Contraceptive Gel.

Oh that's awesome, you should definitely be able to get it! It does not have that same effect of increasing likelihood of HIV transmission, although it obviously doesn't protect against STIs. It is not irritating at all, i only used it briefly with my caya diaphragm and i was much more comfortable with it than nonoxynol-9. The reviews on amazon are great, I'll put that link below so you can see what the packaging looks like along with an old blog post that gives some good info. I ended up getting a copper IUD eventually because I am in a long distance relationship and for over a year all our weekends together ended up being during my most fertile time and I worried about it and wanted to be more spontaneous. If my partner lived near me I would absolutely still be doing this.

I use diaphragm. They’ve developed a lot. Mine is Caya, used together with spermicide gel.
http://caya.us.com/

However, I suggest the Caya gel or the Contragel because they are side effect free and based on lactic acid.

The nonoxynol-9 spermicides have been banned in EU due to side effects so they are better avoided.

I was surprised when I tried this diaphragm since I had one about five years ago that was pretty difficult to insert and take out and my partner could feel the rim, but the new one is super thin and easy and my partner didn’t feel it.

Some women have sensitivity to spermicide which was a concern to me because I have very sensitive skin. I talked to my pharmacist who recommended contragel green. It is a much more gentle alternative to traditional spermicide,and I have not had any issue with it so far. It is a little pricey but is worth it to me.