We found 6 Reddit mentions of Essay on the True Art of Playing Keyboard Instruments. Here are the top ones. 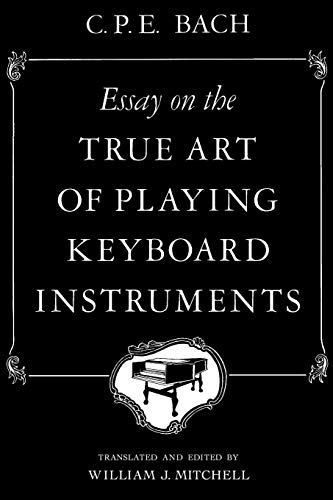 Found 6 comments on Essay on the True Art of Playing Keyboard Instruments:

I think Wayne Leupold has something on playing 18th century lit, and I think I own it, even. But I can't vouch for how good it is. The standard historical document -- at least to my mind -- is C.P.E. Bach's Essay on the True Art of Playing Keyboard Instruments.

Continuo playing is an art all its own. Tchaikovsky's book has some useful methods for four-part keyboard harmonizations. However, all that and everything you already listed is just the beginning. Back in the day, keyboardists would have learned the rule of the octave and worked out of thoroughbass manuals (or studied with a teacher). CPE Bach's Essay on the True Art of Playing Keyboard Instruments (Versuch über die wahre Art das Clavier zu spielen) is one such manual, and it is thorough. I'm finding Friedrich Niedt's Musical Guide very entertaining and informative. This is the book JS Bach studied out of and taught to his students. The English translation out of print, but you should be able to find it in a library somewhere. Or, if you can read German blackletter, the original editions are on IMSLP. Heads up, in figured bass the number of voices can change at any time to accommodate the figure. If you have a bunch of 6's, for example, it's common to drop down to 3 voices.

Anyway, doing figured bass realization properly takes — as /u/65TwinReverbRI indicates — a lot of time and expertise to the point that people get graduate degrees in this stuff. You won't realize something like a keyboardist from Bach's era unless you put some serious time in, but you might be able to write something convincing to the modern, untrained ear if you focus on counterpoint between the outer voices and handle your diminutions correctly.

&gt; There are also people who appreciate a more conservative view towards "classical".

I've never denied that. Nor am I denying a space for that kind of view. As I've already told you several times before, my issue is not with your definition per se, but your attempt to portray that definition as synonymous with "classical music".

&gt; pieces and composers that are routinely performed worldwide as per the standard classical piano repertoire for performances, recitals, concerts, or competitions.

Ah yes, the institutional theory of art. The trouble with this definition is that it's circular - "It's classical because it's in the standard repertoire, and the standard repertoire exists because it's made up of pieces that are classical". Even if this sort of definition was meaningful, it still wouldn't provide much evidence to back up your view. A quick look at just a partial list of upcoming performances of works by, for example, Schoenberg, shows that these composers receive plenty of performances. To suggest that they are not part of the "consensus", runs counter to the facts, and is frankly insulting to the performers I mentioned in my last post. I'm still waiting on an answer about them, by the way. There's even an entire year-long festival in London at the moment celebrating 20th century classical music, with everything from Adams to Zappa.

Now, you might come back and provide examples of other lists of performances from the same website which show that, for example, performances of works by Mozart are more frequent, or that performances of Xenakis are less frequent. Even if I set aside the complex set of historical biases, artistic prejudices and financial concerns which account for this, I can still provide counterexamples which undermine this point. Take the list of upcoming performances of the works of CPE Bach for example. This is a man who quite literally wrote the book on "classical piano". Mozart supposedly remarked that "He is the father, we are the children". Not only that, but the 300th anniversary of his birth is coming up next year. And yet his list has fewer performances on it than Schoenberg's (50 vs. 87 at the time of writing). So by the definition that you've just provided, CPE Bach shouldn't be included within the bounds of "classical piano" either. Hopefully that gives you just one small illustration of how this sort of definition quickly becomes ridiculous when actually applied to the real world. Counting performances doesn't tell us what is and isn't "classical", it mainly just shows us which composers happen to be popular with audiences at any given moment.

It doesn't matter how many times you shift your definition, I can keep coming back and showing you what's wrong with each one, because your basic premise remains the same - it's a premise which is at best misleading. Either start a new subreddit with an accurate name for the content you want, or modify the rules of the existing one to make the name accurate.

Part Two of Essay on the True Art of Playing Keyboard Instruments, by C.P.E. Bach

I'm not sure if this is quite what you're after, but you might find C.P.E. Bach's treatise on keyboard instruments to be instructive - from what I recall, there are segments about keyboard accompaniment in there.