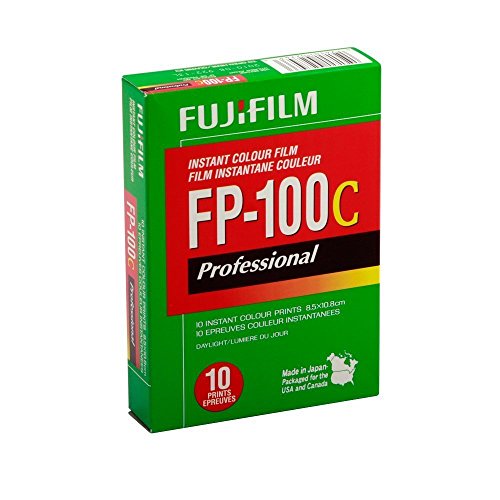 600 packfilm is pretty expensive. The Impossible Project sells film for about $25 a pack (so, $2.50 a shot). From what I've heard and seen, the film isn't that good either, unless you're into the whole "lomo" or "artistically shitty" thing.

If you want to get into Polaroid cameras, I'd recommend picking up a Polaroid Land camera on eBay. Fuji makes two types of film for those, FP-100C, which is color, and FP-3000B, which is really fast black and white. I've used both, and am very happy with the results. I just bought a Polaroid Land 104 for my flatmate for $25, so they're not too expensive. You'd also need to attach a modern battery pack, which takes only a couple of minutes and $2 at Radio Shack. I could describe how to do that.

I use it on my Polaroid 440 and Polaroid back for my Mamiya RB67. It makes really great prints.

Remember this is for the pull-apart film. This is not for the 600 series instant cameras.

Fuji still makes it, so for now it's very easy!

Got one of those cameras a few months ago. I see Polaroids at Goodwill all the time but this particular OneStep definitely screams gaudy and it had to be bought. The camera is powered by the battery in the film so it most likely won't work (though it's possible). This should be compatible with the camera though: http://www.amazon.com/FUJIFILM-FP-100C-Inches-Professional-Instant/dp/B0000ALLYO/ref=sr_1_1?ie=UTF8&amp;amp;qid=1377539181&amp;amp;sr=8-1&amp;amp;keywords=fujifilm+sx+70

I just fixed my land camera 100 a few weeks ago! I used fujifilm that I bought off of amazon. (http://www.amazon.com/FUJIFILM-FP-3000B-Inches-Professional-Instant/dp/B001G70M6S and http://www.amazon.com/FUJIFILM-FP-100C-Inches-Professional-Instant/dp/B0000ALLYO) It can be kind of expensive, but I thought it was definitely worth it.

Why use Instax? You can get an older Polaroid Land Camera and use Fuji 100 and 3000 pack film, available on Amazon. If you're looking to spend a bit more, you could also get yourself a medium format kit with a polaroid back.

Oh, I misunderstood! I was thinking you would shoot the shot with your hassy, shoot the same scene with the Instax &amp; give them the instax print as a business card of sorts. I do not think there's a Instax back for a hassy. I have shot instax film in a RB67 polaroid back, but the process probably wouldn't work for street photography. If you're looking for polaroid FILM alternatives that CAN be shot in a pola back, I think FP-100c is your only option
http://www.amazon.com/gp/aw/d/B0000ALLYO

Last packs I bought from Amazon. I buy from Adorama and B&amp;H when it's over $8.99

It looks like it has a pack film back. I'm not 100% positive, but I believe you can buy this film:
http://www.amazon.com/FUJIFILM-FP-100C-Inches-Professional-Instant/dp/B0000ALLYO/

And use it in that camera. I'm not sure if it needs batteries or anything.

Why use old when you can buy new?

Just out of curiousity, what makes the 450 worth the effort?

If you're just into instant film, check out The Impossible Project. The film is really expensive, but at least you can buy instant 8x10 B&amp;W. You can also turn the peel-off portion into a usable negative if you have the proper chemicals on hand. So, kind of "best of both worlds", as long as you don't mind paying $20 per shot.

Why don't you just go buy some more? Or did I miss something?