We found 7 Reddit mentions of Masterwork Classics: Level 1-2, Book & CD. Here are the top ones. 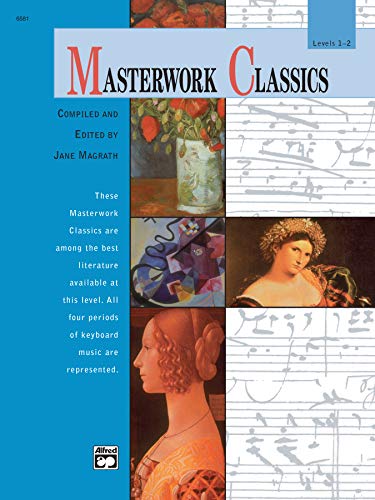 It seems to me that most people are very poor judges of what is too easy. I think most people would benefit from going much easier than they think they should. It just tends to hurt their ego and so they instead spend a ton of time on one really hard thing.

The thing is, in the same amount of time you could spend working on one really hard piece, you could've probably worked on a dozen or more simpler pieces. Those pieces might not be as individually challenging, but each probably has something that challenges you a little. And it likely exposes you to a much greater variety of challenges. More rhythms, more keys, more variety period. That is going to lead to much more lasting improvement than spending a month or more on a single piece of really hard music.

The accumulation of skill will eventually make harder music easier to learn. I always say if you can't sightread it flawlessly and effortlessly with good musicality, there is something to be learned from polishing it up. That might take a few days, or it might only take 30 minutes of practice, but it's infinitely more worth your time than throwing yourself inaccurately are very difficult music and hoping to get it right.

The thing is, it doesn't feel like you're making progress because you're making huge strides. And the better you get, the more incremental your improvement will be. It takes more and more small incremental improvement to even notice you've gotten better and at some point it's basically almost impossible to notice unless you record yourself and then look back in 6 months, or maybe read something difficult and then come back to it 6 months later to see how much easier it is. Early on you are making big leaps, but it just can't continue.

Honestly, it's a lot like an RPG. You want to gain a lot of XP, so you go fight the hardest monster possible that gives 500 XP. But your party wipes... over and over... for an hour. In that same hour you could've beaten dozens of monsters that only gave 50 XP. in that same amount of time you could've gotten 3 or 4 times as much XP if you hadn't wasted your time wiping to the really hard enemy. And now that 500 XP enemy is laughably easy because you've leveled up so much. It's just that 50 XP a pop doesn't feel as good even though it's much more efficient.

This one is going to be hard depending on your goals. It seems many people only want to play music that is very personally fun to them, but that's not always the most efficient path. It's an issue if you want to get better or if you want instant (but often frustrating) gratification. It's honestly very worth it to spend some time suffering through less fun stuff and building up the skills that will eventually let you just pick up a piece of music and quickly read it or learn it in a few days. So you have to decide if you want to play something you love right now but it takes you 1-3 months every time you want to learn something new...or if you to be able to constantly pick up music you like and learn stuff you enjoy within a week or days.

The additional benefit is that once you get to that point, you'll actually accelerate your learning because you'll be able to play so much more music that you'll just exponentially increase your exposure. It will still feel slow, but you'll actually be improving a lot more.

So if you want to actually work on improving, just find anything. Don't go looking for the perfect piece at the perfect level. Just go grab tons of stuff erring on the side of offensively simple and just learn a ton of it. I like to grab song books from used book stores to use as reading/learning material. It's very cheap and I get a ton of material. Once again, if I can't sightread it, it's probably worth practicing.

EDIT: I'll also add that only working on overly difficult music often leads to an increased risk of developing lots of bad habits and playing with lots of tension.

I'm a huge huge fan of the Masterworks Classics series. These aren't arrangements, but complete baroque and classical pieces scaled for difficulty. If you're halfway through Alfred's you're ready for book 1.

I think after three years that seems feasible if you have a pretty good teacher to help get you there. My main advice, however, is to find lots of pieces that are easier than those two for the in between period that you love just as much.

We're very lucky to play the piano because many of the world's greatest musicians have been playing and writing for our instrument for the fast few hundred years, which means there's a huge variety of material written at lots of different levels. Books like the [Masterworks Classics] (http://www.amazon.com/Masterwork-Classics-Level-Alfred-Editions/dp/0739006770/ref=sr_1_1?ie=UTF8&amp;amp;qid=1452604892&amp;amp;sr=8-1&amp;amp;keywords=masterworks+classics) series have lots of good material at different levels and it comes with a CD so you can listen to all the pieces to decide which one you like.

My point is, it's great that you have goals!! But listen around and try to find other pieces that you love just as much as those that you listed that you can play earlier. Alternatively, you can find [simplified versions] (http://makingmusicfun.net/pdf/sheet_music/clair-de-lune-piano.pdf) to hold you over until you get to the real deal.

To teach transposition I have my students transpose every tune in Masterwork Classics level 1-2 into all 12 keys.

They have to harmonicaly analyze the original key and then write each new key in pencil on staff paper. They also have to perform each one at no more than quarter note = 40bpm.

This can cover a lot of things if you take the time to dig into it. Note recognition on the staff, scale visualization, transposition skills, etc...

The [Masterwork Classics] (https://www.amazon.com/Masterwork-Classics-Level-1-2-Book/dp/0739006770) series is pretty good. They come in quite a range of levels that would see you through a lot of growth. There's also a decent amount of songs in each book for a relatively affordable price. The variety of classic composers in each book might also help you discover which composers you enjoy best (if you don't already know).

Hanon can be helpful, but remember that technique is a means to an end. Really, if you learn to play 3-10 short pieces with musical dynamics and articulation, you're learning technique and coordination as well. Why not grab a book like the [first Masterworks Classics book] (http://www.amazon.com/Masterwork-Classics-Level-Alfred-Editions/dp/0739006770) and try to learn 5-10 pieces? I think you'll be surprised at how quickly you can improve.

Also, my biggest suggestion for technique is to keep your wrist fluid. If you make sure to keep your wrist from locking while playing quickly, you'll go far. For example, many beginners think of the first five notes of Hanon #1 as five notes/five finger motions, but it's really one wrist movement. When you start thinking of grouping notes like this, your technique can take off.

I'll tell you the same thing I told someone else:

"Alfred's Masterwork Classics series is, in my opinion, a great resource. The pieces are pretty simple in the beginning, and you should be able to transition from something like "Alfred's Volume 1" without much difficulty. I know I found it a real joy:)."