Reddit reviews on My Bloody Life: The Making of a Latin King

We found 5 Reddit mentions of My Bloody Life: The Making of a Latin King. Here are the top ones. 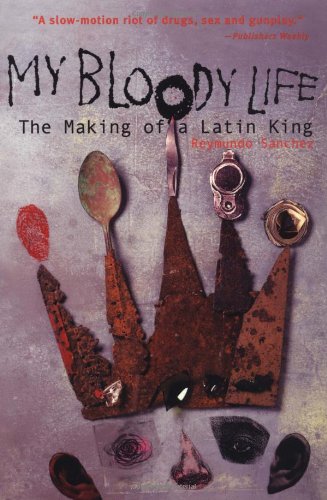 Found 5 comments on My Bloody Life: The Making of a Latin King:

My wife works in education and we are both avid readers. So I end up helping her suggest the books she picks for the classroom. She more times than not will come to me to help pick out something to get the interest of the boys.

The unfortunate part of this is that in the urban communities, there is an uphill battle with trying to get a book that has a male interest but yet, does not cross too many lines...especially when those lines did not exist ten or fifteen years ago. I tried my best to get the Halo novels into the classrooms as the violence in those books is not graphic but they contain a lot of action; not to mention the video game tie-in as a bonus. No dice.

But there's "Hunger Games" and "Twilight" all over the fucking place. Now considering that "The Hunger Games" novels are far more graphically violent than the Halo novels is a mark of hypocrisy as the only reason that it is being promoted is because of the female lead character. Don't get me wrong; the Hunger Game novels are damn good and I have no problem with the female protagonist. But the fact that they vetoed the Halo novels because of "inappropriate content" was a crock of shit.

And if that wasn't enough; one of the other books that got promoted was "My Bloody Life; The Making Of A Latin King." Don't get me wrong; this is an amazing book and it does what it is meant to do; but this is a book not meant to be read by ten to fourteen year-olds. While it's purpose is meant to educate youth in avoiding gang life; because of the age-based immaturity of the students, more times than not it ends up glorifying it rather than tearing it down.

And the truly sad part is that you hardly even find the athlete biographies in the schools anymore. To keep the boys interested in reading in my wife's class, we contacted the WWE and they sent us a case filled with their youth-focused biographies and "on-the road" true stories. And the CPS representative tried to make a fuss about those for a moment until we gave her a set to take home to her son.

Make of that what you will...but the educational concern for boys in this country can be summed up in two words; little and none.

Try reading "My Bloody Life: The Making of a Latin King". It's a really interesting book that shows what the life of a gang member can be like.

Another great book that details north side gang life no other is this one
http://www.amazon.com/gp/aw/d/1556524277/ref=redir_mdp_mobile

Is there any specific subject matter you find inappropriate?

There's a book called "My Bloody Life: The Making of a Latin King" that follows a boy retelling his life beginning with a scene in which he is molested by his uncle at a very early age and follow him as he joins a gang, etc. There is sex, drug use, violence, and foul language throughout.

It's fairly easy to read, I flew through it in a couple of days.

I remember it being the most popular book at our library in Chicago. Very eye opening, but again, not sure on your limits to this kind of thing since you are an English teacher and not a library per say.

Best wishes on your journey!

You cannot write this paper without noting that Mayor Richard J. Daley was a former street gang member from Canaryville (read "Boss").

I would also consider looking at the role that "economic segregation" plays in all of this. Gangs exist and thrive all over the City, not just the south and west sides.

Uptown and Rogers Park, for example, are pretty diverse but have pockets of low income residents, and there has been street gang violence in those neighborhoods dating back to the '70s.

As neighborhoods gentrify and the amount of "affordable, multi-unit apartments" are reduced, the gang bangers almost always disappear. Conversely, the formerly stable neighborhoods where they have moved to are now becoming war zones.

I would also look at the impact that the anti-loitering ordinance had, if any.

Here are some other resources you might want to consider: