We found 8 Reddit mentions of Neuroscience. Here are the top ones. 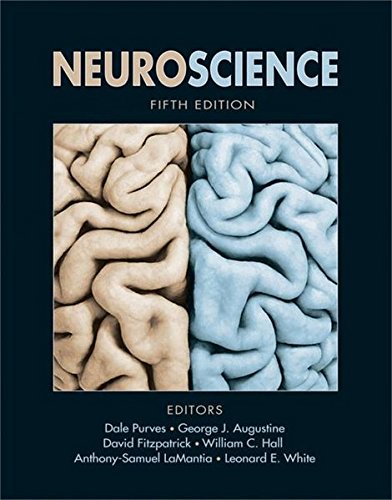 Each of these books is aimed at a different audience, but this should get you started.

Let me explain why I brought up dyslexia as a common comorbidity of having problems expressing yourself and adhd, but first lets talk about language. I will get back to dyslexia and ADHD. Do note while my post is long, I provide lots of links to pictures.

I am going to be using a lot of images from a biology textbook called Biological Psychology: An Introduction to Behavorial, Cognitive, and Clinical Neuroscience. Mostly from Chapter 19 which deals with language, while I am going to provide specific images you may find it useful to read the visual summary if you want more info.

Put simply to do language you are going to use multiple regions of the brain together as a circuit. See here

You are going to use areas in the back of the brain tied to vision, then you are going to pass that information to a multisensory processing area where your brain combines the senses and figures out what to do (aka you are forming the visual images in your mind before you think of the words that correspond to the visual images). You are then going to pass the information once again to a multisensory processing area but this area is more auditory based, followed by you passing the information to a specific area of the frontal lobe that is very close to the prefrontal areas which is tied to language, but also attention, sequencing of data, and response inhibition (stopping impulsivity) but also activation (aka release the brake and now go). This information is then passed to premotor and supplementary motor areas which is then passed to the motor areas. And during all these steps there are inbetween fine tunning by the subcortical brain areas such as the cerebellum and the basal ganglia.

And people with different types of aphasia may have different problems. Like a person with expressive aphasia may know what they want to say and they can draw what they want to say but they can't find the words for it. While people with receptive aphasia have problems understanding language. Now receptive aphasia can be more than this where people accidentally skip words in their explanations that are crucial in the sentence, or they have anomia where they know what they want to say (the word is on the tip of their tongue) but they can't remember it, or they do an unintentional word subsitution subsituting another word with a similar sound or meaning, sometimes they mess up not the grammar of the sentence but the word tense, or use the wrong pronoun (like her vs she)

When I took it, we used Purves - Neuroscience 5th Edition .

The book is definitely needed, as it really helps to reinforce what they lecture on. If you're looking to get ahead before the semester begins, I think he follows the first few chapters tightly. If I recall correctly, he starts with some basic neuroanatomy, and then jumps into electrophysiology (similar to what you did in Bio 213 physiology lab, except in more detail) and receptor kinetics.

If Dr. Medler is also teaching it, she can be somewhat abrasive and difficult, but you can still do well if you go to lecture and pay attention.

Kandel is a very comprehensive neuroscience textbook with a lot of good figures as well as descriptions of experimental evidence. The most recent version came out just last year, so it is very current.

My school typically recommends Bear's textbook for systems-level information and Purves' Neuroscience for cellular stuff. I prefer Purves because it actually covers both subjects and it goes more in-depth on the molecular topics!

If you want to spend some money, https://www.amazon.com/Neuroscience-Fifth-Dale-Purves/dp/0878936955/ref=mt_hardcover?_encoding=UTF8&amp;amp;me= is a perfect resource. This was our textbook for neurobio in college and I still find myself referencing it. It's possible you could find the PDF somewhere online, I haven't looked. If you have a little background in cell bio, this would be a great place to start learning.

Beyond that, I agree with the suggestions of /u/Hypercuboid and /u/Noobsessed.

If you are getting information off of forums (about pathways, interactions, etc.), make sure you do your own research, ask for or check sources, and try to understand the mechanisms. Wikipedia rabbit holes can sometimes help with this in the beginning, and can provide you with reliable sources/resources to follow up on. Keep in mind that the answers are almost always not as simple as people portray them. Many MOAs are not fully understood, especially with nootropics. That's why some refer to these substances as RCs and us as guinea pigs; because, in large part, that is true.