We found 3 Reddit mentions of Newtonian Mechanics (M.i.t. Introductory Physics Series). Here are the top ones. 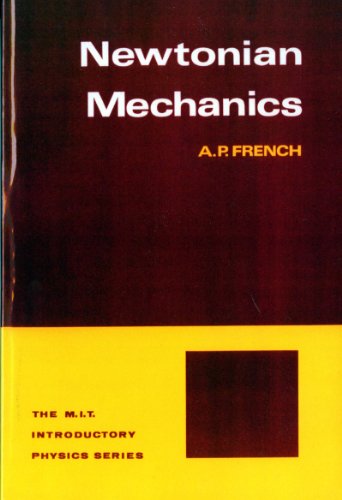 I generally think physics textbooks have too many problems for self-study, often having over 100 problems per chapter, half of which have answers in the back of the book or as part of the problem statement. That makes it difficult to focus on what you should focus on, and can lead to burnout. But your tutor can help you select the problems that will be most beneficial to you.

If you're just looking for problems, you should probably first consider Schaum's outlines, such as their College Physics or Physics for Scientists and Engineers. I've always found the problems in them to be slightly archaic, so I'd go down to a used book store or Barnes &amp; Noble and check them out to make sure you think they're what you want. There are tons at used book shops, so they'll be easy to find.

Most of the textbooks have similar selections of problems. For searching for problems, my favorites are Serway,* which has a large number of different types of problems that are clearly marked (as, for example, integrating earlier material or having a structured solution) including, I think, two per chapter that ask you to "explain why the following situation in impossible." I love those. I also like Halliday and Resnick, which has a large number of data-centric inverse problems, i.e., here's a plot or a table, now draw out some constants from it. Both are often reworked. I've linked to about two editions back because it's the same material and a tenth of the price, even used, almost no one will be using it in courses.

If you actually need something to read and you're going in more-or-less the standard order, I'd suggest French's Newtonian Mechanics. It's an old book, but it's still in print in its original form for a reason. My copy is at the office, so I can't check the problems, but its got the best prose and explanations for a standard textbook of any that I know. I'm sure it doesn't have the volume of problems you seem to desire. If you have more leeway in how you proceed, I'd check out Moore's Six Ideas That Shaped Physics. It goes it a different order than most, but it feels like it is designed to emphasize concepts while teaching you to work problems, starting with conservation laws rather than kinematics (which is mostly a distraction).

* I linked one that includes the first half of the book (chapters 1-22), but I'd look for the paperback including chapters 1-14, part of a five volume set, each of 200-400 pages. They're more portable, easier to peruse, and less daunting than a giant hardbound tome of 1500-2500 pages. The same thing goes for Halliday and Resnick.

Halliday &amp; Resnick would be my recommendation. We used their Physics, Parts 1&amp;2 when I was a student, not their Fundamentals of Physics, which seems to be a different book (and the two books were published simultaneously for a while; I was never sure what the difference was).

If you want individual books, try Kleppner &amp; Kolenkow for mechanics, and Purcell for E&amp;M. Those are often used in honors sections of freshman physics, since the problems tend to be a bit harder. There's also Newtonian Mechanics by A.P. French, which was used for freshman mechanics at MIT for a while (not sure if it still is). French's introductory books on Special Relativity and Quantum Physics are also good. But for relativity my favorite intro-level book is Spacetime Physics by Taylor &amp; Wheeler.

Quite honestly, I would recommend teaming up with somebody who KNOWS physics. I cannot point you to any tutorials, because I don't know of any. I suggest you check out what books the universities assign. For my part, I used Knight's Physics for Scientists and Engineers which, while not flawless, was okay.

Just look for something on Basic Classical Mechanics. (I would recommend Taylor's book on Mechanics, but that's too advanced...)

I haven't looked through this:
http://www.amazon.com/Newtonian-Mechanics-M-I-T-Introductory-Physics/dp/0393099709

but, I used French's Vibrations and Waves and that was a GREAT book. So maybe that'll help, too.

Also, get a book on linear algebra for all that vector stuff; either that, or get a book on mathematical methods for physics in particular.