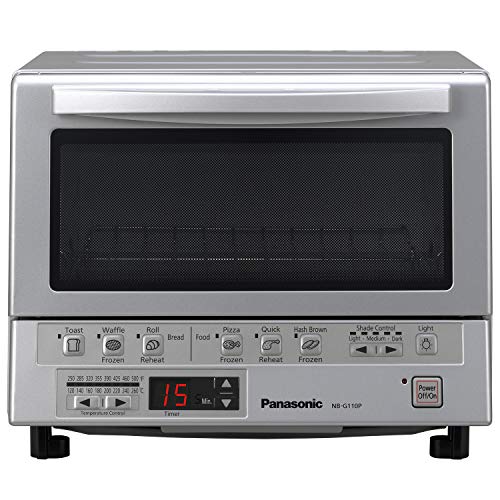 View on Amazon.com
Double Infrared Heating High Efficiency Quartz and Ceramic Infrared Heating Elements are positioned in the front and back to evenly toast, bake, brown and reheat to perfectionPrecise temperature control easily bake piping hot fresh breads and prepared meals, an endless variety of tasty side dishes, home made hors d’oeuvres and more with a convenient manual touch button temperature control sensorSee through glass door the resilient, see through door is connected to the baking rack to smoothly and safely pull the rack toward you as the door is openedClean compact design: The FlashXpress toaster oven's compact design accents any kitchen décor or countertop. Power Supply:120V AC, 60 HertzEasy to use the flashxpress toaster oven includes a square shape inner tray — a perfect fit for pizza up to 9 inches in diameter or up to four slices of bread — plus baking and removable crumb trays
Related categories:
Home & Kitchen Kitchen & Dining Kitchen Small Appliances Ovens & Toasters Toaster Ovens

Nooooo! Leftover fries are really good if you chop them up, throw in some bits of onion and green pepper, and fry that mess up in a pan. (I would never have known that if not for being well acquainted with the most Scottish people one could possibly meet outside of Scotland.)

You can also refresh them by stirring them around whole in a pan or putting them in the oven for a bit and then using them for poutine, where you expect a soggy fry after not too long.

Both options work well enough that if I go to a chip wagon with first-rate fries I deliberately over-order...

Alternatively: infra-red oven. I have one; it makes leftover fried foods totally edible, and does a fabulous job on frozen fried stuff. Like this.

highly recommended by this board, i use it several times a week.

I have this Panasonic I love it. Small, fast, and uses infrared heat. Not at the $50 mark but also not nearly as expensive as a Breville. I use it 4-5x a week.

I personally like the Panasonic Flash Xpress. It was recently brought back to the US market. It uses infrared heating so it's very fast. However, since it is originally designed for the Japanese market, it won't fit some larger things like allegedly "personal" pizzas that some brands put out.

I never thought I could love a toaster so much, but.. here we are. 10/10 good ass toaster.

Yeah, I don't know how some people live without a toaster oven. We almost never need to use our big oven for anything.

Toaster ovens are usually pretty quick, but if you want it to be even faster, get one that heats up with infrared light. This is one of the best things I ever bought (40% faster than a regular toaster oven).

No joke, this is the best toaster in the entire world. They stopped making them years ago but I just searched again and apparently IT'S BACK!!!!!!!

edit 3: removed referral link. Was not even aware of it. Sorry. Jeez.

The value of the induction system is that the metal surface that the food lays gets hot rather than having heated coils with a fan that moves hot air around of the traditional convection system.

The advantages is direct heat being applied to the food much like a stove top; convection systems tend to dry out the food as it takes longer to get to the interior of what you are cooking (which is why you do compensative measures like basting or putting foil over the food). Also traditional convection ovens take longer for heat to radiate through larger foods; which is why you often have cool or cold centers.

This oven also has an infrared system to cook the surface of the food (while the induction system cooks from the bottom). This is likely from Panasonic's FlashXpress line of ovens that is currently on the market (which uses ceramic for near infrared and quartz for far infrared).

It should lead to shorter cook times and moister foods, however, the traditional convection oven is still likely better where cooking with hot air is needed. Such as many types of frozen foods (fries, chicken nuggests, etc.). Not to mention being an order of magnitude cheaper.

Id recommend this one. We have it and it's s much nicer than any other I've tried.

Is it this one: https://www.amazon.com/Panasonic-NB-G110P-Xpress-Toaster-Silver/dp/B008C9UFDI ?

Yes, it's an infrared convection oven. It's basically the same thing Subway uses to "toast" subs. You can buy smaller ones for your home too.

looks like it's using the same heating elements my toaster is using, just finding a way to use steam

I've found I can find better products that last longer than the ones you find in stores. For example the toaster ovens you get in stores are typically terrible and break pretty quick. I found this awesome Panasonic one http://www.amazon.com/Panasonic-NB-G110P-Xpress-Toaster-Silver/dp/B008C9UFDI/ref=sr_1_1?ie=UTF8&amp;amp;qid=1382750852&amp;amp;sr=8-1&amp;amp;keywords=panasonic+toaster+oven

It is more expensive than some cheap models but I've had it over 10 years now and it works like a champ and I use it several times a day.

I just bought a new one to replace my Panasonic Flash Xpress not because it was broken, but because there is a newer version of it HERE it seems to be exclusive to Walmart, at the moment. I did cook some toast, and it turned out well, 2 min 30 in a cold oven, the next batch was a little under 2. I found the rack needs to be in the middle to produce even toasting on both sides, the bottom rack is to hot on the bottom. To copy my own post from last night.

Just to let you know, I found one of the new ones at Walmart so I bought it.

Thus far so good, I bought a cheap loaf of bread just to test it and all the toast turned out good. I tried them both side by side, and they take the exact amount of time, and it's difficult to tell the pieces of toast apart, exactly the same. The controls are better, but still require a few more button pushes then I would like. I put an oven thermometer in it and turned it on at 350 for 10 minutes and the thermometer read 360, which is pretty good.

It has an adjustable rack and a pan which fits in the slots, something the old one didn't have. The interior is a dark(er) non-stick which should keep it at least looking cleaner then the old one. It's significantly bigger as well, and while I can't fit a full sized lasagna pan in it I can fit my half sized casserole dishes which won't fit in the old one, and I would guess a full broiler chicken would fit as well.

The bottom IR "lights" have been replaced with standard metal conducting coils, but on the top side there are now 3 IR lights as opposed to the one before. The timer now goes up to 2 hours as opposed to the 25 minutes of the last one. It also has a convection fan, which moves air around and it very quiet, not something I got to use yet but it's there.

I have dinner plans tonight otherwise I would have bought a frozen lasagna or something just to test it, but thus far I really like it. Enough that I have premtivly packed the flash xpress into a box to give away to a friend.

Hope this finds you well, and I'm sorry about a reply to such an old post, I was searching reddit for info on the new toaster oven when I stumbled on one of my old comments.

I did a lot of reading and deliberating when I bought my toaster oven roughly 5 years ago, and I am very happy with the choice I made.

I am a hobbyist chef and I use this thing almost every day. Seriously take a look. I think it's better than Breville's offerings, and I'm generally a fan of Breville appliances.

This strange little toaster oven is the greatest pizza reheater ever: https://smile.amazon.com/Panasonic-NB-G110P-Xpress-Toaster-Silver/dp/B008C9UFDI/ref=sr_1_1?ie=UTF8&amp;amp;qid=1466445546&amp;amp;sr=8-1&amp;amp;keywords=panasonic+flash+xpress