We found 2 Reddit mentions of PC-TV All in One Wireless 2.4G Keyboard Mouse Universal Learning Remote Control. Here are the top ones. 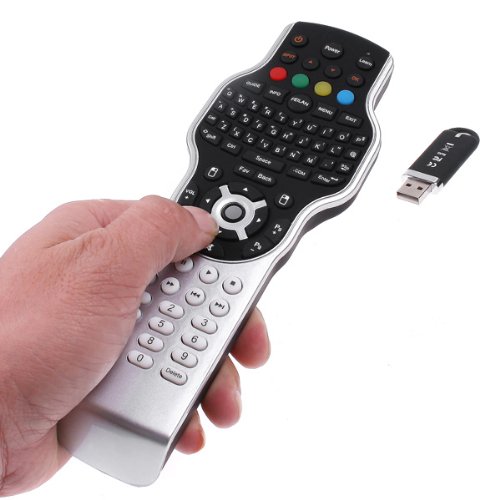 Why not get get an all in one like the one I use or this one maybe this is more to your liking. A couple more essentially identical and awkward options are this one and this one. There's more choices too if you didn't like those, take this one for example or if you just want to have some fun (doesn't have keyboard, consider it an honorable mention). These are links to universal remotes with a keyboard on the back. Some have trackpads like those found on laptops, while some use an "air mouse" (think Wii control). Some use regular batteries (AA/AAA) while others use built in rechargeable batteries.

About a year ago I started looking around for a way to control my TV and HTPC with one remote. I originally wanted to go with a FLIRC paired with a Harmony control to use so that I could use WMC (with Youtube, Hulu+, Netflix and Plex "plugins"). Ultimately I decided against it due to the lack of a keyboard. After looking around I stumbled upon these. I went with the Rii due to the form factor and the WAF.

I am mostly pleased with this setup but there are a few kinks, most notably the battery. At first it was great, no batteries to swap out and it held a charge for about a month before it was time to recharge. But now, a year later, I have to recharge it every couple days. It still works fine but I don't know if I should buy another one, try to replace the battery when it does die, or try something different. There is no way EASY way to open it, and honestly I don't think it could withstand to many battery swaps since it's made of this flimsy plastic. Truly think I'm lucky to have had it as long as I have.

Another thing is that the buttons themselves feel indistinguishable from one another which makes night time use/viewing a bit difficult, wish there was a backlight. I'd also like to mention that I have an issue with the mouse.

As mentioned earlier the mouse is similar to using a Wii, with one difference the Wii pointer only goes to where you aim the control. This mouse works with relative motion to move the cursor. Imagine you just scrolled the cursor to the far right corner of your monitor, you can keep moving your mouse further right but the cursor won't move any further. That means if you did a 180° then you'd still be controlling the mouse even though you are now facing the wall. This makes navigation a little frustrating. Add to that the mouse's sensitivity mixed with no stabilization makes clicking and dragging a chore. Never realized I had a shake in my hands until I held this remote. I remedied this by simply disabling the mouse in Windows. I realized I wasn't using it so I disabled it.

The last thing I had issues with was that there is no real concrete instruction manual. Just some small quick start guide. After spending some time with it, I rather enjoyed experience.

Instead of building from scratch I'm using an old Athlon 2 x4 computer. I'll be using Win7 with XBMC as I'm not fond of linux, and reading about it's moods with AMD hardware cemented that decision. I'll probably put in a SSD to have the fastest boot time possible, as that's pretty important with something like an HTPC. I'm going to have it boot straight to XBMC though I've read that can take some tinkering in windows. I spent an hour reading up on which remote would satisfy my needs and settled on this one.

Thanks for the tips though, I'm mostly using this as a streamer for my videos and an emulator for all the old consoles. I think this will do it, though I wish I could throw it into a better case.