Reddit reviews on Physics of the Impossible: A Scientific Exploration into the World of Phasers, Force Fields, Teleportation, and Time Travel

We found 9 Reddit mentions of Physics of the Impossible: A Scientific Exploration into the World of Phasers, Force Fields, Teleportation, and Time Travel. Here are the top ones. 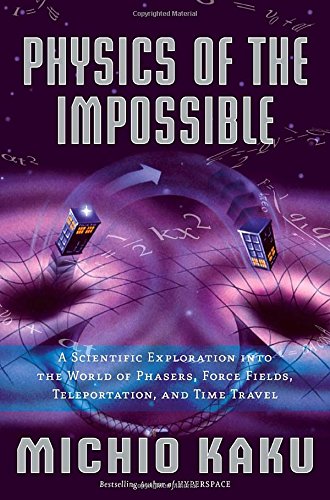 Found 9 comments on Physics of the Impossible: A Scientific Exploration into the World of Phasers, Force Fields, Teleportation, and Time Travel:

Teleportation is not only possible, but already being done. Though, we are a looooooong way off from being able to transport a human being.

Time travel, according to some in theoretical physics, is possible. I personally do not believe it is, but some use the tenants of relativity to indicate that it would work.

Healing factors - not sure what you mean. But we are working on nanotechnology which some day may be able to be instructed to seek out and repair damaged cells while destroying disease.

Invisibility is again, not only possible, but already being developed. There are several experiments that have shown that you can cloak things, the science fiction fantasy of a personal cloaking device is probably a bit far fetched, but given enough time we might be able to. The only caveat is that our current understanding of how it would be achieved would leave you completely devoid of all incoming light so you would, too, be essentially blind. But it would be capable of housing a research facility (visually, radiation and other forms of detection such as walking up to it and trying to touch it would work).

I highly recommend reading Physics of the Impossible by Michio Kaku

Still loved the book, just made me chuckle.

For anyone really interested in a lot of this stuff, especially the physics-related sutff, I STRONGLY recommend reading Michio Kaku's (yeah, that guy) writing. Especially "Physics of the Impossible".

He writes a lot about what it would take to change the future of humanity, and the related impacts on a real level.

Try reading Physics of the Impossible by Michio Kaku. It's not at all utterly ridiculous for a civilization to be advanced enough to travel long distances. Rather than staggeringly improbable, it's likely.

Crop circles, inside out cows, "dropping by a trailer park"... I guess you completely missed the story of missile de-activations caused by saucers. It's been going on for decades.

But go on, be a skeptic. Don't open your mind.

Seconded. Physics of the Future is a great read.

Michio Kaku goes into this in his book Physics of the Impossible. They made a TV series about it, and you should check out this episode

It is discussed excellently by Michio Kushi in Physics of the Impossible.

I recommend "Physics of the Impossible" for a neat physics background read.

Check out this book by Michio Kaku. He talks about the possibilities of this and other science fiction ideas. Interesting but light read.