Reddit reviews on Pirates: The Complete History from 1300 BC to the Present Day

We found 1 Reddit mentions of Pirates: The Complete History from 1300 BC to the Present Day. Here are the top ones. 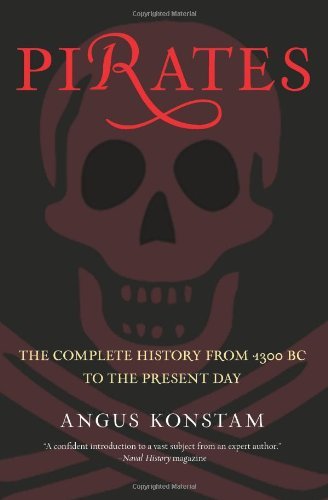 Found 1 comment on Pirates: The Complete History from 1300 BC to the Present Day:

Read up on the adventures and misadventures of real pirates! The best inspiration is real life, and while many accounts are embellished, exaggerated, or flat out fabricated, they are all neat stories that have survived because they are compelling. I took a class my freshman year of college, and there are lots of good (and cheap) scholarly books you can use like Villians of All Nations, Bandits at Sea, and Pirates, The Complete History from 1300 BC to Present Day. These can be a wonderful source of neat ideas, not just for sidequests but the mainquest and worldbuilding. If you don't want to read any of these, feel free to ask any questions you might have and I'll answer them as best I can. I'll include some of the more ready-made sidequests below.

Allegedly, Benjamin Hornigold and his crew once boarded a ship, but according to the crew "did us no further injury than the taking most of our hats from us, having got drunk the night before, as they told us, and toss'd theirs overboard." Seems like an easy jump for a pirate captain to enlist your players in acquiring new hats after drunken shenanigans.

Another time, Hornigold and Blackbeard allegedly hunted a prize specifically because of it's cargo of Madeira wine, which they and their crews enjoyed. Booze is closely associated with pirates, and tracking down a rare kind of wine, spirit, or rum sounds like a fun sidequest.

Again, many of these stories are probably fake, drawn from sensational contemporary newspapers that were unreliable at best, or from Captain Johnson's A General History of the Pyrates (1724). Johnson is a pseudonym, but his work is one of the biggest influences on the depiction of pirates in pop culture, and has some fun stuff in it.