We found 2 Reddit mentions of Poison Study (Study, Book 1). Here are the top ones. 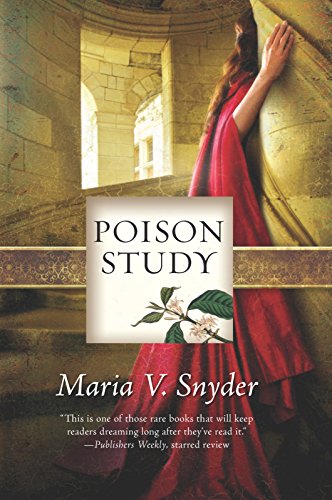 Uprooted is phenomenal, tonally/stylistically I’m not sure I’ve ever read anything like it. For a loose take on Rumpelstiltskin, take a look at her new book Spinning Silver, as it is equally good (though in a different way). Uprooted was derived from a polish fairy tale in much the same way, but the execution is so deft you would never know it if it weren’t pointed out. Lately I’ve been very disappointed with YA/Adult Fantasy book endings, but this one was fulfilling and conclusive in just the right way. Seriously, check them out.

I don’t know if you do much YA, but Tamara Pierce has been one of my favorite authors since childhood. Her early works are aimed slightly younger, but more recent books (I would recommend starting with The Provost’s dogs trilogy) are solid YA.

Similarly, I loved the world building in Sharon Shinn’s Elemental Blessings collection. Although the stories fit together nicely, each book is written as a stand alone narrative, a format I don’t often find but enjoyed (less pressure to read multiple books just to complete the storyline, fewer elements to juggle and keep in your head over an extended plot arch, etc.)

Also, I never hear it mentioned, but Maria Snyder’s Study series, beginning with Poison Study is quite good as well.

I hope you find something that sounds like a good fit, and I’m glad you asked the question, since I’m hearing some good suggestions that I now want to read too.

I've read and loved almost all of the recommendations already here (TAMORA PIERCE). But to add some that haven't been mentioned (and trying really hard to not overload you with 20 books at once), I read and reread Robin McKinley's The Hero and the Crown and its prequel so. many. TIMES. Maybe even more than I reread Tamora Pierce. Patricia McKillip, Maria Snyder, Patricia C. Wrede (Dealing with Dragons quartet), Althea Kontis, Francesca Lia Block, Libba Bray and Susan Fletcher (Dragon Chronicles) are similar authors to check out for awesome female-driven fantasy, with varying degrees of lightheartedness. Wrede, Fletcher, Snyder and Kontis all wrote books that lean a little less epic/serious, Block writes a lot in prose that's also a very quick (but more intense) read, McKillip tends to be more wordy but beautifully so, and Bray can kind of go either way depending on the series.

For more contemporary fiction, RACHEL COHN (of "Nick &amp; Norah's Infinite Playlist"). Her Gingerbread series has content a good deal more mature than Angus, Thongs, etc., but her style is similarly irreverent and witty and really fun. Seriously, check her out. Sharon Creech's Walk Two Moons is like a much younger version of Cohn, still zingy and sweet. For a quieter modern-day read, Garret Freymann-Weyr writes realistic (more mature) young adult relationships, and introduced me to the idea of bisexuality in a sort of roundabout way.

Julia Alvarez relates stories about the Latina-American experience incredibly well, although I think the first book I read by her takes place solely in the Dominican Republic. According to my reading list, I guess young me got sick of reading about other white people, so I'll add Marjane Satrapi's hilarious graphic novel Persepolis and the more sedate Shabanu series by Suzanne Fisher Staples.

(I tried to link a lot of authors to my faves from their work, but I won't be mad if you never look at any of them. Is your reading list long enough now? Also, I know you didn't ask for a ton of fantasy/historical fiction recs, but I think a lot of us defined our teenagerhood by and identified more strongly with one of those series or another.)

tl;dr my top three recs that haven't been mentioned yet are Rachel Cohn, Julia Alvarez, and that one duo by Robin McKinley.