We found 5 Reddit mentions of Six of Crows. Here are the top ones. 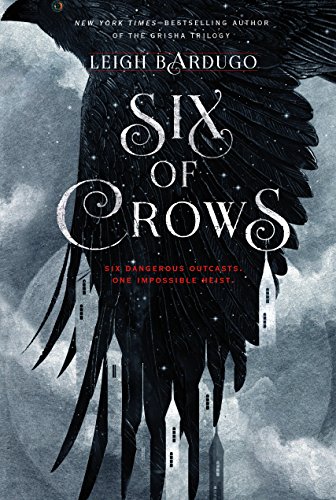 Found 5 comments on Six of Crows:

Okay, I love this question.

Padme suggests Lips Touch by Laini Tailor--it's a beautiful book of short stories that are strange but gorgeous, much like Naboo. And despite the title, it's not a romance so much as slices of lovely weirdness held together by the relationships people develop, which suits her. But Jyn and Rey vote this one down.

Leia suggests Passenger by Alex Bracken. It's a time travel book, but also about loss and displacement and people who don't have any real home left, so it makes her sad but hopeful.

Jyn and Rey team together to get the book club to read Six of Crows and then Crooked Kingdom by Leigh Bardugo, a fantasy duology about the dregs of society. In SoC, a team of low-lifes from a hard city take on a con job--think Ocean's Eleven, but in a fantasy world and with a rag-tag misfit crew of criminals. CK is about the revenge they take after a double cross. These books are both brilliantly written but also perfect for the characters as they are dark but hopeful at the same time, and Jyn in particular like Kaz Brekker, who will basically do anything to win but still loves his people.

The next person they invite to the club is Dr. Aphra because she's so badass. She suggests Illuminae by Amie Kaufman and Jay Kristoff. K2SO told him about this one. It's a story told through found documents--there's no straight narration, but instead transcripts of interviews, photographs, documentation from space ships, etc. It's about a small group of ships on the run from a random attack on their home planet, trying to outrun the remaining enemy ship chasing them. But it also features a psychotic AI and a lot of death and chaos, which is right up Dr. Aphra's alley.

Off the top of my head, Six of Crows might be up your alley.

You may enjoy the Rook, by Daniel O'Malley, and The Raven Boys by Maggie Steifvater.

Six of crows is pretty good. Here's a link to the ebook: https://www.amazon.com/dp/B00UG9LC4I/ref=cm_sw_r_cp_apa_i_CY7xCbTRTT3SP

I don't do digital books really because my eyes but I do have a physical that's just under $10 if you happen to choose me. There's another book in the six of crows series if you like it btw!

Edit: also I feel you with the antidepressant. When I switched to Zoloft I was OUT OF IT. LMAO

I've borrowed both and can read them in my kindle app. They only have one kindle version. Audible still shows member pricing instead of whispersync pricing. Can you test it out on a random title to see if you are getting reduced pricing showing in audible?

The Goblin Emperor by Katherine Addison.

The Raven Boys by Maggie Stiefvater.

Six of Crows by Leigh Bardugo.