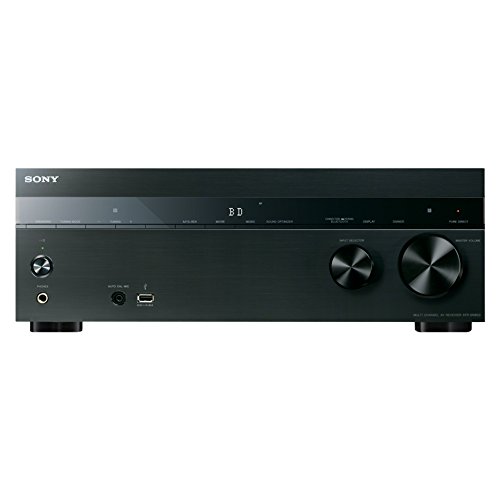 If you are looking to spend around $800 this will be a killer combo.

The sub packs plenty of punch and tightness, even at very low volumes. The receiver has plenty of inputs and a beautiful on screen menu that is very customizable.

Speakers - Blue Octave... I had never heard of this brand. But I had a set of older sony speakers in there before and they were sounding tinny. So, I gave these a shot. I think I got them for around $100 for the set of 8, and they have been absolutely amazing. They sound great.

Subs - I don't have links to them. But they are both Sony subs. The one I got with a 5.1 set of speakers I bought a few years ago, and the other one is the exact same thing, I picked up at an estate sale for like $12. They're behind my seats.

Receiver - Sony STRDN-850 (current)... However, this arrived today. I bought this for 2 reasons. 1) We just had a pretty big storm roll through our area over the last couple of days. There was no lightning or thunder, but the power did surge a few times while I was trying to work from home in my theater, and at one point, the receiver shut down and wouldn't come back on. Then, after a while when it did, it wouldn't output video or audio. Audio has since randomly returned, but still not outputting video. 2) We recently spent a good bit of coin on our back yard, and have a nice area to entertain, which we plan to do more often. The new receiver will allow for multiple zones, and I'm planning on putting an outdoor theater out on our new patio

Gaming PC - Ryzen 5 1600x CPU, Asus Strix B350-f motherboard,Asus Strix GTX 1070, 16gb RAM built into a Rosewill 4u server chassis. I replaced the front intake fans with these to add some character. Single 250gb NVME SSD for OS, and single 525gb SATA SSD for game storage. 20tb of drives in a Windows Spanned Volume acting as a backup for the media server.

The rack - I actually got this for free. I work in IT and a company I was consulting for had their entire IT staff just walk out one day, which is why I was there. Apparently, they had stockpiled the previous 5 years worth of the company's hardware refreshes in this storage room. One of the things we had to oversee was a massive e-cycling job to get rid of all those old PCs and things. They were going to pay this other company we subcontracted by the pound to haul it all away, so I talked to the boss and we both agreed that anything I took was going to ultimately save them money. So, I got like 8 SSDs, about 6 i7 CPUs, some RAM, 5 monitors, and then I took that roll-around rack, and two of my teammates took these brand new Dell 4-post racks.. I didn't have room for those giant things, so I let them take those. This has been great. The only drawback is the door is warped and won't close. So, it's currently taking up space in my basement.

As for what I like... It's hard for me to pick. The projector has an amazing picture once you get it dialed in. It has several options to adjust the image, whether it be keystoning, or image shifting of some kind. So, it's not hard to get it lined up. My only complaint is that it tends to move. This room is one of our basement rooms and is right underneath our kitchen and family room on the main floor. The projector is mounted right onto the joist in that floor/theater room cieling, so when people walk through the kitchen, it tends to bounce. I find myself having to readjust it about 2-3 times per month. An annoyance at most, and not at all a negative of the projector. What I love about the projector is what a stark difference it has made. Version 0.1 of this home theater, was a white sheet hung up with thumbtacks and about a 10-year old 720p projector I won at a company auction back in 2007-2008. So, that one was on it's last legs anyway. I'm pretty sure the bulb was dying. Add that to the brand new bright bulb in the Optoma, combined with the increase in resolution... Massive improvement.

I don't have a link to the chairs, we bought them from a dealer here in town. But if I HAD to pick a favorite item in that room, it's going to be the chairs. I spent a LOT more on them than I intended to furnish that room, and they're so big, I had to take the door to the room off and cut 2 studs out of the wall to get them in there (it was a narrow door). But, they have electric reclining, which is a pretty cool feature, and they lay waaaaaay back, almost completely horizontal. The headrests are also motorized to INCLINE. So when you ARE completely reclined, you don't have to manually hold your head up to see the screen... They're soft, and warm... They'll be in my house for a long time regardless if I have a home theater or not.

The subs add an element of immersion. I've had surround sound systems for years, but never have I had the space, time, money, and patience to 'architect' it from top to bottom like this before. So, the first time I felt the bass kick really good during a movie or game, I was pretty much hooked. Speaking of immersion, I added the dynamic backlighting behind the screen last summer. It's 2 Phillips' Hue LED strips. One running the length behind the top of the screen, the other behind the bottom. I use this free software called ScreenBloom to control the color of the backlight in real time. Since everything I do is via the gaming PC anyway, I just have it run there. The creator says it will work on all movies (which it does) and most games (though I haven't found a game it didn't work on yet). It basically takes a snapshot of your screen every X miliseconds and then generalizes the color and sets the hue to the closest matching color in it's range. You can set the refresh rate for it to fit your preference, and you can also set zones. So, if you have multiple Hue lights, you can assign that light to a specific section of the screen. It's a really cool piece of software. This adds a whole new level of immersion believe it or not.

While I love my lapdesk setup, it is not anywhere NEAR where I want it to be yet. I have searched high and low for a decent 'living room' lapdesk setup for gaming and while there ARE more and more options coming, the demand just isn't high enough for companies to dedicate resources to developing for it. So, over the last 18 months, I've bought and returned about 8 or 9 different lapdesks, and finally settled on this one from iSkelter. My criteria was, it had to have room for a keyboard, mouse, and a gamepad (all seen in the pics), and it had to fit across the arms of the chair. This lapdesk by itself was sufficient, but my gripe with it was having to completely get up out of the chair to put it down when I was watching a movie, and one of the dogs wanted to get up in my lap. I wanted something to swivel into place and out of the way depending on whether or not I needed it, and I didn't want to have to get up to put it 'away'. So, after some real hard thinking and strategic google-fu for pretty much a solid month, I stumbled across this company. They make electronic attachment brackets for police and military vehicles. I looked over their components catalog and liked what I saw. So, I emailed their sales and explained what I was trying to do. Within minutes, they responded, and asked for measurements of my chair, lapdesk, etc; then within 24 hours they got back to me with a parts list. The whole mount cost about $200. But, it has worked brilliantly. Like I said, this solution isn't QUITE done yet. The mount screws into the wood lapdesk right in the center, and it's wobbly. It will suffice for now, but I'm going to keep poking at that until I get it right.

I know I didn't quite answer what I liked or what my favorite part is. But, as I said earlier, it's hard for me to pic a favorite. The whole thing has been challenging to solve a host of problems one by one, but now that it's where it is, it's all so satisfying.

Feel free to ask if y'all have anymore questions.

I think this is what I'm looking for! I'm actually looking to add Bluetooth streaming to my setup, so I'm looking at new receivers. Is 'All Channel Stereo' mode a pretty common feature?

The model i'm currently looking at is here:
https://www.amazon.com/dp/B00JC31SGG/ref=cm_sw_r_cp_awd_SJ7LwbDWTEDJ0

Do I need to get an external power amp? I have a Sony STR-DN850 and I'm getting a pair of Martin Logan Lx16's. Will my receiver be able to power those speakers along with my pioneer SP-BS22LR's for surrounds? Or will I need to get a power amp for the Martin Logans?

Thank you very much for all the choices when it comes to picking out a sub! With the varying price I'm sure i'll be able to find on that hits the right balance between budget and performance. Edit: Reading the review for the NXG NX-BAS-500 I think that's the one I'm going to go with. If i pick up the other pieces on sale (which they do go on pretty often) It will fit in my budget nicely.

So you are suggesting i ditch getting the towers and get 2 pairs of the bookshelves instead. Is this mainly due to the cost savings or is it just that with a good sub the towers are redundant? Would i gain anything if i could get a good deal on the towers? Looking at historical amazon prices they went down to ~$70 each 3 times since May.

As far as the receiver I'm not really set in stone but it's the component I've done the most research on. I was initially leaning towards a Sony STR-DN850 as it was one of the highest reviewed recievers of 2013. But doing some research I found that the B zone was not powered. That would mean I would need a separate amp for my outdoor speakers and i would like to keep it all in one if possible. Doing some more research I came across the Yamaha RX-V675 I mentioned above. What I like about this Yamaha is what they call "intelligent amp assign", my understanding is that the receiver contains two separate amps (one for 5.1 and a 2nd for either a zone 2 or 7.1) which would allow me to power my outdoor speakers without a separate amp. In this price range I wasn't able to find a receiver by any other brand that had a powered zone 2. Is there something out there in the $400-$500 price range that powers a 2nd zone that you would recomend? I'm also open to the idea of going with a separate receiver/amp for my other zone if you can make a strong argument for it ($400-$500 total).

Looking up the price history on the Yamaha receiver it makes sense why i can't find anything with the same features around $400. It is last year's model and was a $600 receiver that has been reduced in price because a new model came out.