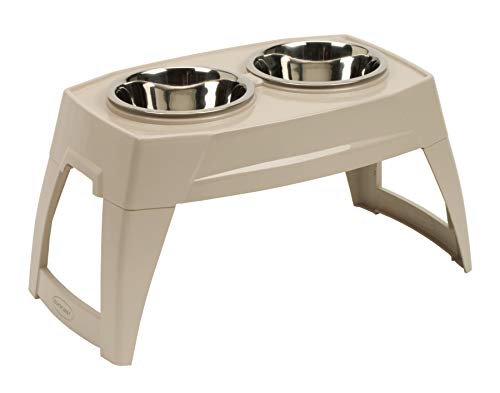 View on Amazon.com
ELEVATED BOWL: Raised feeding tray comes with two bowls so your pet's needs are all in one place!COLLAPSIBLE TRAY: Legs can be stored below the feeding tray for smaller pets or added on to accommodate larger dogsDURABLE: Tray is made of durable plastic while the included bowls are stainless steelEASY ASSEMBLY: Legs easily snap onto tray in order to elevate it for your larger dogIDEAL SIZE: Elevated dog bowls measure 22" x 13" x 4", perfect for your pets of all sizes
Related categories:
Pet Supplies Dog Supplies Dog Feeding & Watering Supplies Dog Bowls & Dishes Dog Raised Bowls

Greyhounds love slumberballs! I got my 60 pound girl a extra large one since I knew she'd like a lot of room to stretch out on it, so you could either do that size or size up to a giant one to allow him to be more comfortable. Either size would work though.

Did you get toys yet? How about a raised feeder? In my experience with fostering and owning my girl, they don't seem to be too big on chew types of toys, but love squeaky toys. Mine loves this squeaky toy since the squeaker is super loud and strong, and this plush toy. A little while after we got her we also realized that while she wasn't into small balls like tennis balls or anything, she really loved big balls like soccer balls. I was sick of her destroying soccer balls quickly, so I got her one of these since it was recommeded to me by someone at the dog park, and that thing is seriously indestructible. As far as feeders go, if you haven't gotten one yet then I'd recommend this one. $20 and comes with two bowls. I've had it for a year now with no problems.

I have only had my greyhound, Kuiper, for 3 weeks, so I can speak to what the first couple weeks with a shy dog is. He is also a retired racer (race name Bella Kingo) and was off the track for about 2 months before coming into our home. What is your girls racing name? What is her new name going to be?

Greyhounds in generally seem to be a very reserved breed at first, but they then open up and ours is becoming quite the goofball!

I don't know if you plan on kenneling her at all, but we chose to kennel Kuiper and are very happy we did. He likes to "get away from it all" sometimes and just goes to his kennel to take a nap. Also, he prefers to eat while standing in his kennel - while reaching to his food bowl outside.

As for things to keep in mind. The first day is often overwhelming for the dogs (at least it was for Kuiper.) Hourly trips outside until he got on schedule (he didn't go poop for the first 2 days!) and we ended up adding some metamucil to his food to solidify his stool. Greys can be sensitive, and you'll notice it most when they go to the bathroom. Also, we kennel Kuiper in our room at night and the second night his stomach was grumbling so loud it actually woke us up. That sometimes happens with the stress of new scenery and a new diet.

Also, patio doors! Our grey took one look at our deck and headed right into our patio door. He didn't hurt himself, but was kind of confused as first. So, if you have a patio door, just draw the blinds or put some masking tape on it and then introduce it to him.

I'll give you our experience with our cats. When we first got Kuiper, we put the cats in the basement for the first day to give him a chance to acclimate himself to us and our house. The second day we brought the cats up and every time a cat would come near, Kuiper would jump to his feet. At first, we thought it was a sign of aggression, we soon figured out that he was TERRIFIED of them and just wanted to leave the room when they came in. 3 weeks later, he still doesn't "like" them, but generally completely ignores them.

Another thing you could do to help the bond is grooming her. We bought a grooming glove which Kuiper really likes. I think it helps build the bond between him and I.

I had the chance to take off some work and spend the first couple days with him - I think that helped. All in all, we are still learning a LOT. He hasn't had any accidents in the house and only barks (or whines) when he needs to go outside to relieve himself. Honestly, it has been nothing short of fantastic!

Edit: I would also recommend a harness instead of a collar for when you go outdoors. I was reading an article just the other day that said there has been an increase in cases of dogs having esophageal problems because of collars. With shy dogs, sometimes they like to just freeze and stand there - and sometimes you need to move them for their own safety (i.e. Kuiper likes to freeze when people on bikes come towards him and we need to gently move him to the side of the trail.) The harness takes the strain off the neck. Just my two cents :)

my black lab pup does this. it's pretty adorable, but it makes a huge mess and tile is super slippery when wet. i haven't done this myself yet, but a friend recommend i try a raised feeding tray, something like this: https://www.amazon.com/Suncast-Elevated-Feeding-Tray-Large/dp/B0015QC4SO

So like one of those bowl lift things for large breed dogs that have back and neck issues?