Reddit reviews on The Swerve: How the World Became Modern

We found 3 Reddit mentions of The Swerve: How the World Became Modern. Here are the top ones. 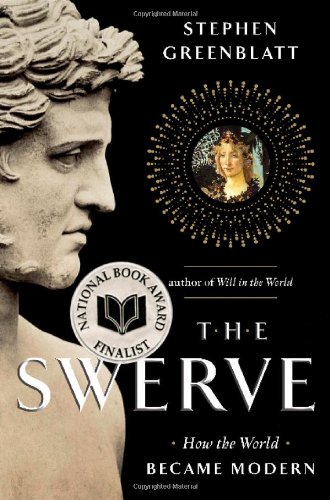 Found 3 comments on The Swerve: How the World Became Modern:

I'm reading a book about Lucretius and the guy, Poggio, who rediscovered him 6 centuries ago. Recommended!

&gt; One of the world's most celebrated scholars, Stephen Greenblatt has crafted both an innovative work of history and a thrilling story of discovery, in which one manuscript, plucked from a thousand years of neglect, changed the course of human thought and made possible the world as we know it.

&gt; Nearly six hundred years ago, a short, genial, cannily alert man in his late thirties took a very old manuscript off a library shelf, saw with excitement what he had discovered, and ordered that it be copied. That book was the last surviving manuscript of an ancient Roman philosophical epic, On the Nature of Things, by Lucretius-a beautiful poem of the most dangerous ideas: that the universe functioned without the aid of gods, that religious fear was damaging to human life, and that matter was made up of very small particles in eternal motion, colliding and swerving in new directions.

&gt; The copying and translation of this ancient book-the greatest discovery of the greatest book-hunter of his age-fueled the Renaissance, inspiring artists such as Botticelli and thinkers such as Giordano Bruno; shaped the thought of Galileo and Freud, Darwin and Einstein; and had a revolutionary influence on writers such as Montaigne and Shakespeare and even Thomas Jefferson.

The book has been the subject of 2 r/HistoryofIdeas posts:

"For this reason, the word “epicurean” came to mean a seeker of luxury, a sybarite; but in fact, Greenblatt shows, the original Epicureans led a modest lifestyle.".

Book for adults, later for kids (it's good):

In the book, there are 20 points that are made by Lucretius about us in our world(s). They end with these:

15. All organized religions are superstitious delusions.

17. There are no angels, devils or ghosts.

18. The highest goal of human life is the enhancement of pleasure and the reduction of pain.

19. The greatest obstacle to pleasure is not pain; it's delusion.

Yes, deep wonder. To some degree, this "wonder" betokens our purpose then. As self-aware parts of the Universe, we look up and around, and down and into, and we WONDER. And while the Universe is able to be appreciated, it will be.

It's worth getting the hardcover. ;)