We found 8 Reddit mentions of Harmony: Fifth Edition. Here are the top ones. 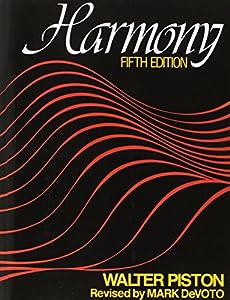 15-20 minutes is going to be pretty ambitious for your first classical composition! It'd be a real treat if you pull it off.

First, find some tutorials on the internet for reading sheet music. There's tons of them and it's not worth getting a textbook for; it's just something that needs constant practice. Once you're reasonably fluent in sheet music, you've won half the battle.

Second, get the fifth edition of Walter Piston's Harmony. It starts out with the very basics - scales and intervals - and proceeds to cover all the important contrapuntal and harmonic practices of the Common Practice era, then gets into some modern stuff at the end. It also has exercises for the reader to work out. However, it assumes you can already read sheet music.

If you have the time, I'd recommend teaching yourself the basics of piano as well, just enough to know your way around a keyboard. It's a terrific visual aid when it comes to classical music and theory. Some famous composers got by without it though (most notably Berlioz).

Cool... alongside the technical stuff (which you'll obviously need) I would definitely spend some time learning some theory to help with the composing.

If you want to do that the "slow and hard way" (but actually quicker and easier than messing around on the internet) I suggest getting a basic harmony textbook and working your way through it. Do all the exercises in a MIDI sequencer so you can hear the results. The book I used back in the day was Piston, but almost any harmony book will probably do. Then get a counterpoint book and do the same thing. Those are strong foundations, and it's stuff you can do away from the guitar. If you get the book and find you're not ready for it, work through the beginner resources in the sidebar of /r/musictheory and then try again.

Is orchestration, composition and harmony something you've studied quite a bit on? Like, have you grabbed a few books on the subject and dug in? The orchestra is a fickle mistress, especially when migrating from another, non-orchestra related, genre. If you haven't studied one or any of those things, it will make the learning process a living hell. Thankfully, the orchestra has been around for hundreds of years, so there is a massive amount of knowledge out there to pull from.

These lists are "start to finish" kind of lists. Do them in order and you should be alright. One will be a "quick start" list (not as much to read) and another will be a "long haul" list (way way more to read).

Music theory is not different on a guitar than on any other instrument. And it gets very hard to get music theory correct when it is taught by largely self-taught guitarists, because they have a tendency to think every shape they play requires a name (a trait shared by musicians on most chromatic instruments).

Go get a basic music theory book like Music Theory for Dummies or Music Theory: From Begginer to Expert. After youv'e gone through and really understood what's in those texts, you'll be ready for more advanced stuff like Mark Levine's Jazz Theory or Walter Piston's books such as Harmony or Counterpoint.

Alternately you could look at texts on arranging and orchestration at that point as well.

Stay away from instrument specific texts, particularly those related to chromatic instruments (of which the guitar is one) because you'll almost find something that is a well-intended, but mistaken, concept. Also avoid texts aimed at Berkelee school of music. While they are a great school in terms of their performance degrees, they have an odd fascination with modes that is shared by virtually no other music school in the world.

Harmony by Walter Piston is very thorough, but it's a serious treatment and perhaps not for the faint of heart. Also, you may want to get an edition before the fifth as it's substantially different from a pedagogical standpoint than the earlier editions. I can also recommend Kostka's Tonal Harmony very highly, but also a serious treatment. In fact, it may be best just to start with the Kostka and pick up the Piston later if the fancy strikes you.

These two books teach harmony in very structured way, and in many ways that's the best for learning counterpoint. Eventually, depending on how serious you want to get about composition, you may want to read Schoenberg's book Theory of Harmony. It covers the same material as most harmony books, but it does so from the perspective of the composer. It's even a little philosophical (and dense). It's not unusual for graduate students to re-learn harmony using the Schoenberg text as it forces you to think like a composer. Of course it's a more difficult read, but only if you're unprepared.

If you'd like something a little more easy, there's no shame in getting the Dummies series book on harmony. It does the job with a minimum of depth. Frankly, though, it's in your best interest to start with a solid, university level textbook like the first two I mentioned if you want to tackle counterpoint. Eventually, it's a good idea to read more than one book on tonal theory anyway, so it can't hurt to start with the Kostka and just put it down and use the "Dummies" book. You can always just come back to it later.

This might be miserable at first, but if you want to get the maximum amount of development for your composition, I recommend these two books:

^ This comes with cadences. Learn to play scales, arpeggios, and cadences. All of them.

^ This book will teach you pretty much everything you'll want to know about harmony and composition. Highly recommended.

Thanks for the in depth reply! I actually found another option which was I found a classical composition teacher (been teaching for a couple decades) who starts students off with Walter Piston's Harmony 5th edition -- Would you recommend this as opposed to the self-taught route?