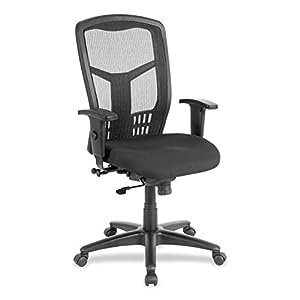 Buying options
View on Amazon.com
or
Find on eBay
Seat glider for fully adjusting seat depth to your perfect positionOptimize your comfort by reclining the back at a 2-to-1 ratio to the seat angleAdjust the arm height and width for a better fitBreathable mesh back and unique mesh fabric seatErgonomic back supports your back's natural curvature
Specs:
Related categories:
Home Office Chairs Home Office Desk Chairs Home & Kitchen Home Office Furniture Furniture

If you can't find a Herman Miller Aeron 2nd hand I would recommend this Lorell executive chair from [Amazon] (https://www.amazon.com/gp/product/B0074GX2YE/ref=ppx_yo_dt_b_asin_title_o06_s00?ie=UTF8&amp;amp;psc=1) with the extra [headrest] (https://www.amazon.com/gp/product/B00P85C6OU/ref=ppx_yo_dt_b_asin_title_o05_s00?ie=UTF8&amp;amp;psc=1). I did a ton of research on best bang for the buck chairs at the beginning of med school and after looking through tons of reviews, this one seemed to have the most people who were satisfied years after purchase while fitting within my sub-200 budget.

I've sat it in everyday studying for &gt;8 hours for almost 2 years now and it's still as comfortable as day 1. The seat and arm cushions haven't worn down at all. The mesh backing has stayed taut and is very breathable. The headrest is super comfortable. The adjustments are solid and it has a great recline. Set up is easy too. Obviously this is no Aeron but if you don't want to go 2nd hand, I think this is a fantastic option.

Although they're both pretty much at your max budget, both of these options are really good chairs.

I was in your boat a few months ago and was set on a dxracer. After a lot of research and looking into it I went with this Lorell office chair. I'm very happy with it.

I have a high back mesh chair made by Lorell and added on a headrest. I've had mesh chairs at work for years and I'm a big fan. It's not plush like a big leather chair, but it's still comfortable and breathes so well. This chair has good adjustability; the seat can be moved forward/backwards independent of the back and then it has your standard adjustments.

on a side note, how are gaming chairs compared to traditional ergonomic office chairs like mine https://www.amazon.com/Lorell-High-Back-Swivel-Chair-x28-1/dp/B0074GX2YE/ref=sr_1_1_sspa?ie=UTF8&amp;amp;qid=1525365202&amp;amp;sr=8-1-spons&amp;amp;keywords=lorell+chair&amp;amp;psc=1

Honestly, your best bet is to go to a store that sells chairs and try them out. You should be able to tell which ones are sturdy enough for you, plus it'll be a lot easier to figure out what's comfortable.

I spend a lot of time in various conference rooms for work, and I was very pleased with this chair: http://www.amazon.com/Lorell-High-Back-Swivel-Chair-x28-1/dp/B0074GX2YE

I don't know how durable it is though because the place that had them had just bought them a few months prior.

I ride a Herman Miller Aeron at work, and nothing else really compares. But fuck me if I'm gonna spend $500+ on chairs for the house ... I've found Lorell Executives to be an excellent value and a great chair (adjustable, super ergonomic, good size) for long hours on the computer. I'm a big guy and wreck lesser chairs (every Ikea and Office Depot/Max chair ever)in a matter of months but the Aeron and Lorell chair have held up.

ETA: I'm reading a lot of comments that are recommending Costco chairs, I have to recommend against them. I've personally thrown 3 out from wearing out the cushions and arms.


But you probably want this future chair more: http://www.amazon.com/WorkPro-Commercial-Mesh-Executive-Chair/dp/B00GXW3YJ8/ref=sr_1_46?s=office-products&amp;amp;ie=UTF8&amp;amp;qid=1419864276&amp;amp;sr=1-46&amp;amp;keywords=ergonomic+office+chair

I currently use the Staples Torrent, but after spending the past two months in it for more than 12 hours/day studying, I realized that I can't do that anymore. It needs to go. My shoulders and back hunch forward and my thighs start to hurt after a bit as well. It was great in the beginning--granted I never sat this long for such an extended period of time--but now it's just aggravating.

I don't want leather/"leather" anymore. I need ventilation. Mesh only. I wish someone had told me this sooner.

I'm looking at this from Amazon (Lorell LLR86200 or its newer variant (actually, based on the reviews it might be a different model style entirely) the LLR86205. The first chair in particular has a significantly number of positive reviews.

From Office Depot, we have the Realspace Pro Quantum 9000 Series that was recommended previously by a redditor. Lots of reviews on the site, but also much more expensive as it's $279 from them.

From Staples, the Staples branded Hyken which has favorable reviews and the Acadia, but some people have commented about it not being great for sitting too long.

Lastly, I just discovered Madison Seating from a redditor comment, but I have never heard of it nor know why their prices are significantly lower than the competition. For example, the Herman Miller Mirra at $499 or the Leap Steelcase v2 at $575.

I just want something that will not cause me pain anymore.

For the most part, my budget from Amazon is $250 (max). If it's something that costs a little bit more, that'd be OK--it'll eventually go on sale and I can pick it up at the lower price.

If it's for one of the higher end chairs (e.g., from Madison Seating), I'd really have to think about it and see if the jump from any of the listed chairs makes a difference.

EDIT: Online review of Madison Seating show that they take used chairs, refurb them, and then sell as new. I'll skip that retailer.

I have been trying to find someone on here who has it and see what they thought about it. Anyways, thanks for the reply!