We found 5 Reddit mentions of Aquaclear A1370A1 20-Gallon Biomax,White. Here are the top ones. 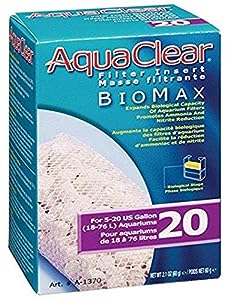 5g would be better if possible, I highly recommend TopFin 5.5g kit: https://www.petsmart.com/fish/starter-kits/top-fin-essentials-aquarium-starter-kit-5262256.html

Just take a look at my happy bois in their own 5.5g tanks (SO MUCH MORE LIVELY, and to think I had them in the same 3.5g starter tanks before :( I wish I switched sooner):

The included TopFin HoB filter can easily and cheaply be modified (although I chose not to use them as I prefer using sponge filters): https://i.imgur.com/QYNiVEV.mp4

With the following supplies:

Thanks for the great suggestion!

It looks like the provided sponge/filter media is pretty subpar, so I wouldn't buy it without extra biomedia like an Aquaclear 20 sponge ($5 for the 3-pack or $1.50 if you buy a few things on Amazon at the same time) or a couple Fluval U1 foam pads ($1.50/each), or Aquaclear Biomax ($3). So, minus points for that added complexity/extra cost, but bonus points for low flow, adjustable intake, and included intake sponge!

I'll add it to the spreadsheet, I think I'll make a collection of suggested alternatives for each category. Thanks again!

Correct, you don't remove/discard any part of the filter media except carbon once a month if you're using it. When you do your water changes, take the media out and swish it in your dirty tank water to clean off any goop and detritus, maybe squeeze it a bit so it doesn't drip, and put it back. In this filter I think you could fit a small bag of ceramic media and a piece of sponge if you're not using the cartridges designed for it. I usually buy the stuff made for AquaClear filters but you may need to buy a filter media bag (little mesh bags with a draw string, designed so you can customize what you put in your filter; I have found AquaClear brand at Petsmart before but you can find on Amazon and different aquatic retailers) because even the media sets for AquaClear 20's may be too large (if it were too large like I think, you could cut open the bag with ceramic media and dump into one of those mesh bags; I suspect about 3/4 of the amount for an AC20 would probably be about right for this filter). A sponge for an AquaClear could be cut down to size. If you can't find AquaClear stuff you can also look for Fluval branded stuff, it's the same thing.

You can also use filter floss that gets tossed every week to few weeks (as it gets dirty) to catch detritus as it comes into the filter; I use the plain poly-fil like is used for pillow stuffing, found in craft stores (make sure it has no flame-retardant chemicals if you go this route); I have used both the stuffing kind and the pad kind used in quilts, I find the pad kind a bit easier because I can cut to size and fold it up if needed. It probably wouldn't be as effective in this filter since it draws from the bottom, compared to a hang-on-back style where the water pours in from the top. It's definitely not required, but some people like it. I use it on my saltwater tanks a lot. Hopefully that all makes sense!

Before ammonia is added, you'll see 0's all the way across the board for ammonia/nitrites/nitrates (it takes a few days for flakes to break down to produce ammonia and they can be a bit messy; some people also use those mesh filter media bags or even a clean pantyhose to hold a plain grocery store cocktail shrimp or big pinch of fish food to start the cycle so that when it breaks down it doesn't make a mess). A bacterial supplement can help the cycle go faster but it's not strictly necessary; many people cycled tanks before those were developed! Pure ammonia is definitely the cleanest method of cycling a tank and one I had great success with last time I used it (for a saltwater tank but the nitrogen cycle works just the same).

And yeah, we don't have anything high end close to me, it's an hour plus drive to anything besides a little bitty Petsmart lol.