Reddit mentions of Shadow & Claw: The First Half of 'The Book of the New Sun'

We found 32 Reddit mentions of Shadow & Claw: The First Half of 'The Book of the New Sun'. Here are the top ones. 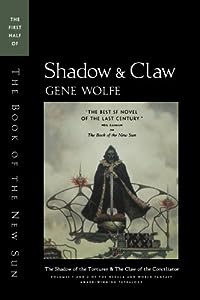 Found 32 comments on Shadow & Claw: The First Half of 'The Book of the New Sun':

Sword &amp; Citadel is the second half of The Book of the New Sun.

If you would like to continue on through the rest of the overall Solar Cycle, it is Urth of the New Sun, Book of the Long Sun and Book of the Short Sun. There are omnibus editions available, you can see them all here.

Also, The Fifth Head of Cerberus is arguably a prequel to the series, and either way is well worth a read. And if you want to dig even deeper, Castle of Days has Gene Wolfe discussing BotNS as well as a bunch of other short stories.

See? Not confusing at all...

Well, perhaps the most famous, and certainly the most influential, is the Dying Earth series by Jack Vance. Not only are the original books by Vance still available, but there was also a recent anthology by many famous SF authors set in the same milieu.

Gene Wolfe's Book of the New Sun is the next most famous work. Amazing stuff and highly recommended.

I can also recommend Hiero's Journey (and its sequel) as perfect examples of what you're looking for. One catch, though, is that these are out of print now. Very entertaining if you can find them (second hand copies available easily enough online).

And of course there are the Shanara books.

Last week, I bought both Anathem and Wolfe's The Book of the New Sun and decided on the latter to start reading last night. I'm not sure either book is appropriate for pre-bedtime reading when I'm starting to doze off as they both seem to require attentive reading... I think I need some brain candy for the late night reads.

Gene Wolfe's The Book of the New Sun. Extremely well written, very complex and rewarding to those with a fondness for symbolism and narrative puzzles.

Also, A Canticle for Leibowitz by Walter M. Miller Jr. A classic, complex work about a future, post-apocalyptic society where scientific knowledge is carefully preserved by a holy order of monks.

Have you read The Book of the New Sun by Gene Wolfe? It's got all the attributes you mention, and it's widely considered to be one of the best pieces of writing ever to come out of science fiction. Extremely subtle, extremely dark, has a good claim for featuring the fullest single character in science fiction altogether.

I have no idea what the French translation is like, but I usually feel that a lot is lost in translation with normal books, and with Wolfe where the specific wording is very important to be able to read between the lines or get the subtext I'd doubt that a translation works well.

But you can get them used very cheap off amazon.

There's several different edition, some are in four books. Most are in two, there's even a couple of omnibus versions. Used paperbacks on amazon sometimes go as low as £0.01 plus shipping, and shipping is not that expensive within Europe, especially if you can find all the books from the same seller and get a discount on shipping.

Book submission: Shadow &amp; Claw: The First Half of 'The Book of the New Sun' by Gene Wolfe

it might be based on the fact that The Book of The New Sun is the greatest fantasy/Sci/fi Novel written since Tolkien. (IMO, of course)

But his other work can be hit or miss. I've found the short stories to be good as is the novel Peace. But if you haven't read Book of the New Sun...1st of all I'm Jealous, and second of all don't even bother with his other works until you've finished it.

You could try googling, but this is much asir.

Yeah! Gene Wolfe's series The Book of the New Sun is a great read. It has some very, very interesting uses of language, almost archaic in tone and meaning, but reads almost like poetry sometimes. I recommend it, probably one of the most re-read books on my bookshelf.

First half
Second half

One of my all time favorite authors is a guy named Gene Wolfe. I don't know or honestly care what anyone else thinks about him, I find his writing imaginative and super creative while still being still understanding that there are limits even in a fantasy world.

The recent version by Orb is pretty good. There's an incredible version by Centipede Press but it's only a few thousand dollars! If something gets published by Centipede that's a definite clue to quality.

The Book of the New Sun by Gene Wolfe. It's not for the faint of heart, it's extremely literary, but it's good reading.

Shadow &amp; Claw: The First Half of 'The Book of the New Sun' - Gene Wolfe

pretty awesome book. i just got into this and i'm really liking where it's going. It follows this torturer from a torture guild who got banished for showing mercy to one of this victims.

The Book of the New Sun by Gene Wolfe

I adored the earlier Dune books, and was excited for the prequels.
The new writing style is very odd, and you can tell when the authors each wrote alternate chapters. Neither of them seemed to grasp the same grand scale and ancient feeling that FH did to the originals. The settings, characters and plot lack any of the mystery, excitement or depth that the originals had. Notwithstanding the Dune universe setting, they aren't great sci-fi books either.

I read the first with mounting despair, I read the second and abandoned the series. I didn't buy the third or any others. Perhaps they improved an astonishing amount in each subsequent release, but it wasn't worth finding out for me.

For ancient world and conflict sci-fi that introduces deep ideas and has interesting prose, try: Gene Wolfe and his Book of the New Sun series: http://www.amazon.com/Shadow-Claw-First-Half-Book/dp/0312890176/ref=pd_sim_b_6

I also like the epic scale of Dan Simmons - Hyperion and Ilium series are good, though quite unlike Dune.

Ok, possibly secret nugget of awesome: Tad Williams' Otherland series. Starts off fairly slow but when it gets going, you're in for a good, long ride, as there are four books in the series, each with nearly 1000 pages.

Also, Connie Willis has a clever, almost frenetic writing style that I really enjoy. I particularly liked To Say Nothing of the Dog but she has a number of novels that involve her own particular take on time travel.

An older classic that not everyone reads, Gene Wolfe's Book of the New Sun. Like Frank Herbert, Wolfe definitely writes for adults, and also like Herbert it's hard to say whether what he has to say is really significant or if he's just pulling philosophy from his ass.

It's set on Earth in the far far distant future when civilization has fallen to a mostly fallen to a medieval level, but lives amid the ruins of a far greater technologies. There's one tantalizing mystery after another. Though Wolfe's habit of never exactly giving a straight answer to those mysteries is fun and frustrating at the same time.

The best books for you I think are going to be Gene Wolfe's "Book of the New Sun" series. It is very good dark fantasy post apocalyptic work. Very developed and dark world. Such a great writer The first two books are collected in one trade paperback.
https://www.amazon.com/Shadow-Claw-First-Half-Book/dp/0312890176

If the author is any good at all you'll pick it up from context without having to think too much about it.

If you like that sort of thing, check out The Book of the New Sun by Gene Wolfe. He uses some really wonderful and obscure vocabulary to begin with, and is inventing an entirely new world at the same time. Half the time you're not sure if he made up a word or if you just don't know it yet.

Read the Book of the New Sun.

This is basically what you're talking about... I didn't know it was sci-fi until about a hundred pages in (though I'll admit I'm a history nerd and was kind of willfully ignoring sly sci-fi references to preserve a 16th-century setting).

Just finished reading Stormdancer, which I loved - can't wait to grab the second one in the series when it comes out in September.

The Book of the New Sun, which /u/rarelyserious recommended I give a try, and MaddAddam.

Book of The New Sun/Book of the Long Sun - Wolfe (this is a very rewarding story, but it requires commitment)

Please be aware that these are all fairly dark. Maybe I'm soft, but The Sparrow was one of the roughest books I've read, from a psychological perspective.

Hands down, The Book of the New Sun by Gene Wolfe. It's actually a series of four books (The Shadow of the Torturer, The Claw of the Conciliator, The Sword of the Lictor and The Citadel of the Autarch) following Severian the Torturer after he is banished from his guild for showing mercy to one of their "clients."

It's just...beautiful and complex and you'll discover something new and fascinating each time you read it. The tetralogy has been ranked on par with the works of Tolkein and has been recognized all the major sci-fi awards, and gained wider literary recognition as well. See the editorial reviews section on the linked Amazon pages:

&gt;"Wonderfully vivid and inventive...the most extraordinary hero in the history of the heroic epic." --Washington Post Book World

&gt;"Brilliant...terrific...a fantasy so epic it beggars the mind. An extraordinary work of art!" --Philadelphia Inquirer

&gt;About the Author: Gene Wolfe has been called "the finest writer the science fiction world has yet produced" by The Washington Post. A former engineer, he has written numerous books and won a variety of awards for his SF writing.

EDIT: A Canticle For Liebowitz by Walter M. Miller Jr. is great, too. It's kind of post post apocalyptic, and it examines the self destructive nature of humanity.

Book of the New Sun. Dense, awesome allegorical sci/fi-fantasy. Its my first read through and I'm already hooked.

Before that I read Pohl's Gateway and American Gods. Cannot recommend Gateway enough.

If you like this read: Gene Wolfe - Shadow &amp; Claw

These will make you work as a reader. You'll have to reread passages, and you will not fully understand the story on one read through (I've done it 3 times so far). However, the payoff for reading these is HUGE. The man is an absolute master of his craft.