Reddit mentions of Staring at the Sun: Overcoming the Terror of Death

We found 15 Reddit mentions of Staring at the Sun: Overcoming the Terror of Death. Here are the top ones. 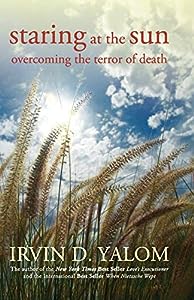 Found 15 comments on Staring at the Sun: Overcoming the Terror of Death:

I started having death anxiety at 18. It hit me really hard and I still feel it every now and then. I'm currently 26. Feels like my chest is caving in and everything is empty and meaningless.

I recommend reading Staring at the Sun. It's a good book and may help you reduce your anxiety about death: https://www.amazon.com/Staring-Sun-Overcoming-Terror-Death/dp/0470401818

Can I offer you a nice book recommendation in this trying time?

Regarding your own death:

Check out Irvin Yalom’s book on the subject. The main argument is Epicurus’ argument: “Death is nothing to us. When we exist, death is not; and when death exists, we are not. All sensation and consciousness ends with death and therefore in death there is neither pleasure nor pain. The fear of death arises from the belief that in death, there is awareness.”

Regarding the death of people close to you:

I had the exact same feelings as you. I couldn't sleep, couldn't eat, and was clinically depressed for some time because my death anxiety got the better of me.

I'm an atheist, and I had the same feelings of dread over my non-existence, and the non-existence of my loved ones.

I can't say that I'm completely "cured" of my death anxiety, but I've found some material that has helped me alleviate it to a certain extent. First is the book, Staring at the Sun, written by Irvin Yalom. He's a psychologist who spent a better part of his career dealing with patients with death anxiety, and this is his book on how we can overcome the terror, or at least how he alleviated it among his patients. I'd be happy to ship you my copy, if you would like.

Another is the ancient Greek philosopher Epicurus' arguments about death cannot harm us. I'm a philosophy graduate student, so philosophy has always been a way to combat the anxiety. It may not be for everyone.

Finally, I found that honestly confronting my fear and writing/talking about it helped. You might consider seeing a therapist, or writing a journal, or even just meditating about it for a few minutes each day.

Hopefully this is helpful.

It is common, and you have some issues to sort out. I recommend this book.

Irvin Yalom - Staring at the Sun. He was very preoccupied to ease people's anxiety over this. I particularly loved Love's Executioner, but that's not that much focused on death.

&gt; But still, that realisation about what we all eventually become is like an anchor, it just prevents you from seeing any hope or purpose. Anything I do right now, will almost be as if I never did it at all in the future. It might have some effects, but those effects are only temporary and won't be felt given enough time. I don't know man, things are difficult, but still, I'll try and take your advice, and thank you for giving it.

What's happening here is that you still deeply believe that meta-meaning is a reasonable category. Trust me, I'm a therapist (hope our exchange isn't seen as a "gotcha", because you asking these questions means you're very healthy psychologically by being willing to make the unconscious conscious and asking the scary stuff even if it naturally leads to anxiety or despair), and I see this all the time: people can cognitively get what another person is saying, but they find a deeper part resisting. Well, this deeper part is resisting because it's still more deeply believing -- trapped by a belief -- in the ideas around meta-meaning and life not having a meaning unless meaning is handed down as with theism.

So if you're interested in it, I'd recommend continually challenging this belief, that life is meaningless if meanings (that is, pleasure-rewarding goals) aren't themselves rooted in something outside of ourselves. Actually, one secular reframe to use is that biology itself provides us with an objective basis for much of our meaning; e.g., our inbuilt tendency to propagate our genes makes having a family such a huge and deep meaning for so many people that even if they're theists they don't really need God at a deep level. You're taking part of the unimaginably complex, rare, and Promethean struggle that is Life with a capital "L"; you're not separate from it, you're part of it. That's quite an honor!

What I recommend to folks I've worked with who are atheists or theists and buy into this conception of meaning not given down is that they could try just jumping into meaningful activities (stuff that really gets your blood pumping, metaphorically or literally speaking) especially when they're feeling the existential despair we're talking about (again, based in the fallacy of equating meaning with a nonexistent meta-meaning framework); and when the part of your comes up that still thinks it's worthless (because there's no meta-meaning, or related concerns), just notice it -- be mindful of it, see it like it's something outside you in a sense, and the more you do this the more it does in a very real sense become outside you and not part of you. On other occasions challenge this belief, which you can do by putting down in writing whatever comes closest to summarizing why things are meaningless, and then imagining a friend or loved one saying it and giving them rational responses to it. Writing all this down can be key.

Yes, I can relate to this. I haven’t read this yet, but it is on my list. It may be of interest to you.

Sorry to not elaborate more or give details (too tired) but this book really helped me so much when I was dealing with bad death anxiety. Good luck.

I'm not sure what type of at risk you're talking but...

Existential psychotherapy and death! (Finding this one really helpful currently, never know when someone with a terminal illness is going to pop up)

Really silly title. But if you can get past that... The first half explains an incredible theoretical framework for explaining that ridiculous thing that happens to brains during the first six months of relationships and why we constantly choose the wrong partners. I reference the ideas from this book constantly, totally invaluable.

I also suffer from this so you're certainly not alone.

I found this book useful: Staring at the Sun: Overcoming the Terror of Death by Irvin Yalom

After reading Caitlin Daoughty's book I read this one:

Highly recommended. I still get sucked into fears sometimes but it has some good philosophy that you can let sink in to deal.

Here is the desktop version of your link

dangerzone, I was in almost exactly the same place when I was 24. My mother passed away a little more than a year ago (I was 30). This was the first profound loss to death that I've experienced. It made me reevaluate my relationship with death and motivated me to go back to questions I had mostly set aside since I was about your age.

Everybody has death anxiety. Some people have learned to do better with it than others. Some people learn to thrive without having to merely distract themselves from the reality of death. Irvin Yalom's Staring at the Sun: Overcoming the Terror of Death was helpful to me last year. It wasn't the absolute most profound thing I've ever read, but it helped me see some of my anxieties more clearly. It might be a good place for you to start.