We found 1 Reddit mentions of Travelpro Luggage Platinum Expandable Rollaboard Suiter with Removable Suit Sleeve, Black, One Size. Here are the top ones. 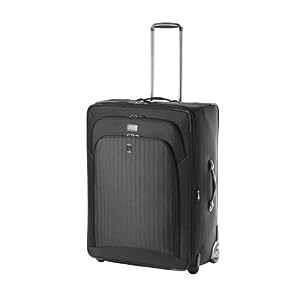 I have two TravelPro suitcases and can't recommend them enough.

I have a big TravelPro Platinum 7 28" for long trips (I chose the older Platinum 7 model because of the warranty). It is a huge suitcase, so it's easy to fill past the 50lb limit, but other than that, it's a great suitcase.

And I have a smaller TravelPro -- a FlightPro 22" Business Upright that I use for shorter trips. It's a mini version of the bigger one. This is the model I recommend for your carry-on needs.

Both are well designed, have telescopic arms, are two-wheeled, and are very rugged. I bought the smaller one first a few years ago after doing much research on the subject and finding that it was recommended by flight crews (pilots/airline stewards).

I had the 22" for a few years and liked it so much I bought the bigger one.

Apparently they had older models that was made in America and was of much higher quality, but I can't say anything bad about the new stuff, never had any problems with it.

I would recommend it as BIFL quality, however you should keep in mind that I don't fly very often, only a couple of times a year.

The link to the Platinum 7 28" is a direct link to Amazon where I bought it from. The link to the FlightPro 22" Business Upright is a link to an image because I purchased it from some other site and I can't find the exact model on Amazon.