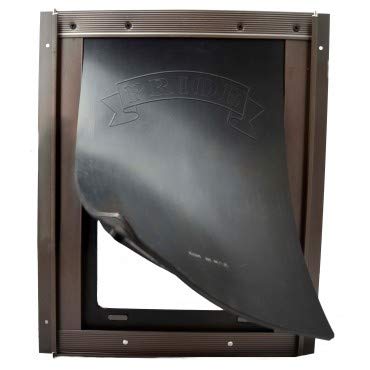 I have had the petsafe dog doors before and I had to replace the flaps often. The dogs ate the insulation and it didn't really work. Moved and had to install another and it must have got worse, it was junk and actually fell off the door, leaving the metal all exposed. I had it installed by a professional so pretty sure it's the door. I had one dog and a puppy then. This time I moved I put in this door. Ihttps://www.amazon.ca/dp/B0019F3ZY8/ref=cm_sw_r_tw_dp_U_x_49zFDbFRZG2VE I picked it up in edmonton. I have seen it here but I don't recall where. I think it was Critters. I now have 4 pretty big dogs (german shephard mix, bernese, bernese/pyreneese and a newfoundland) and it connects the garage to their yard, so they fly in and out of it over and over all day long. In the 2 years I have had it, it's dirty but not worn at all. It's rubber instead of plastic so it seals better, especially when it is super cold out. All of them have sucked the heat out of the house but this one lets in less breeze. It's metal and rubber and it's built to last. We installed this one ourselves and we are wimps with power tools so it can't be that bad. I did use duct tape to cover between the inside and outside metal to protect the insulation in the door. That's the only improvement I would make on it, just something to put between the door and the dog door frame.