We found 73 Reddit mentions of Fear Inoculum. Here are the top ones. 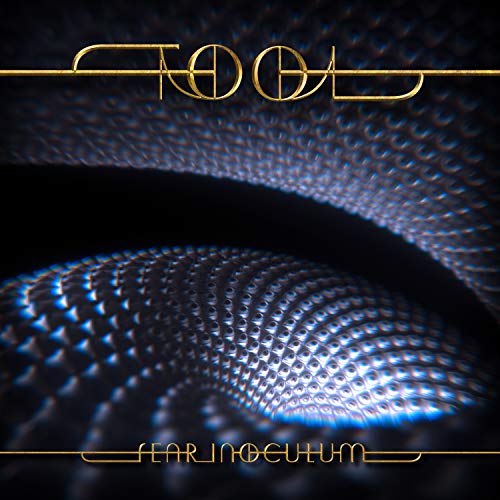 View on Amazon.com
A deluxe limited edition of the album, sold out almost everywhere.Includes a full 4-inch HD screen (featuring original video material), a 2-watt speaker (featuring an additional song called "Recusant Ad Infinitum") and a 36-page insert book.Fear Inoculum is the fifth studio album by American rock band Tool. It was released on August 30, 2019.The album was released to critical acclaim, with reviewers generally agreeing that the band had successfully refined their established sound.The album topped the US Billboard 200 albums chart, their third album in a row to do so.
Related categories:
Styles Rock

Link to the album page

Yes. It’s legit. Not sure why some of you are seeing Bieber referenced in the link. I’ve already received my confirmation email from Amazon. - Fear Inoculum Amazon Pre-Order

Amazon URLs are funky, check this out:

Canadian here. Hoping someone can confirm this is the “limited edition”. Although it mentions “special packaging” in the header, the description doesn’t list the packaging details like it does for the American version.

That'll be shipping from the US won't it?

This one will ship locally: https://www.amazon.com.au/gp/product/B07VGTYTBF

JB Hifi should have it anyway.

Is this a legit pre order?

It's available for pre-order at Amazon Canada now: https://www.amazon.ca/gp/product/B07VGTYTBF/ref=ppx_yo_dt_b_asin_title_o00_s00?ie=UTF8&amp;psc=1

If you're outside of US, you can just change your currency when it asks which card you're using. I got it for £53.53.

Germany is expensive. Wonder why?

You can change that portion of the URL to say anything.

Canadian Amazon still has it up. They ship to America.

Still for sale on Amazon.ca:

That’s the amazon link I ordered from. You can read the discretion &amp; see if you like it. You don’t get charged until it’s sent to you. Guessing if they release a better deal with vinyl you can get that and cancel CD? Not sure how many of these “limited edition CDs” they’re releasing.

Up on Amazon now https://www.amazon.co.uk/dp/B07VGTYTBF

Fear Inoculum https://www.amazon.com/dp/B07VGTYTBF/ref=cm_sw_r_cp_api_i_ABTsDb7XJZ8S0
Amazing pre-order link for those who haven’t seen it.

I preordered from the links on here from amazon

Edit: just checked my reciept and its 58 AUD for the album and 30 AUD for postage. Itll probably take a week or two to get to me but I'll be able to stream from day dot so I'm not hugely concerned about the wait

Has anyone else noticed the amazon pre order for this album changed the pictures of what you ordered a few weeks after you ordered it? Does anyone know what these changes mean, Is this an edited import with no explicit lyrics? It has an " FSK 6 " stamp on the album cover now? https://www.amazon.com/gp/product/B07VGTYTBF/ref=ppx_yo_dt_b_asin_image_o00_s00?ie=UTF8&amp;psc=1

I pre-ordered it from here either the day or the day after you could pre-order it - think they might be out of stock now: https://www.amazon.com/gp/product/B07VGTYTBF/ref=ppx_od_dt_b_asin_title_s00?ie=UTF8&amp;psc=1

In Spain you can also pre-order it on Amazon Spain at 86,99 € (shipping included; the price listed on EMP doesn't include shipping, which is 7,95 €).
https://www.amazon.es/Fear-Inoculum-Tool/dp/B07VGTYTBF/

You can preorder it on Amazon right now:

You can preorder on Amazon now. No need to wake up early

There's one on Amazon.de for 99.99 Euro, but could be a pricing error?

like I said. I reverse-searched the ASIN number to see if it was legit.
The product URL it brought me to was this:

On a desktop computer. Not the mobile app. It seemed fishy as hell to me man. Sorry.

Here is the link:

This should be it I think: https://www.amazon.com/dp/B07VGTYTBF

The signed Alex Grey one says deluxe and the Amazon one says special limited but they both have the same product information, so that's interesting.

Oh damn, the german Amazon has it for 99 EUR... Which seems a tad more reasonable.

Someone has definitely fucked up on the international posting.

I don't know how shipping rates or taxes are for importing to the UK but I'm sure you'll save money anyway!

Don't know if you'll save much by not paying shipping and tax.

Got a lazy link for the packaging?

(This isn’t coming from me, but I am passing on the word:

Sans Salival, which is rare and can be found on re-sale markets.
add both to cart..

Say what?! I'm located in Germany and just found the Amazon pre-order page for the physical copy. Now I have questions: