We found 5 Reddit mentions of Mossberg 500/590 Series Shotgun Picatinny Rail Mount. Here are the top ones. 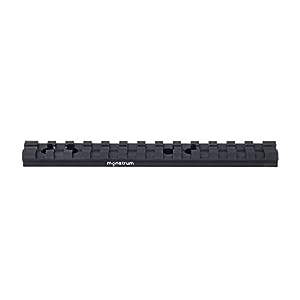 Lot of different options for whatever your ‘tism desires.

I bought a rail for it, but I haven't installed it yet. The rail I bought is 5.4". I'm waiting until I decide which Red Dot I want before I install it. Lasers are a no-go where I'm moving, so I haven't considered one at all.

As far as lights go, it seems like there are a few options. There are lights that go on a railed fore end, integrated fore end lights (thinking of the SureFire), and then I think there are rails that you can attach via clip/clamp to either the barrel or the tube. I have not done much research on that end. I'm leaning towards a SureFire fore end integrated light tho.

The Limbsaver I bought is a slip on. It just shipped yesterday. I bruise easily, so my plan is to put the Limbsaver on over the stock Mossberg recoil pad (I'm on blood thinners) to see if that works.

Link for the rail I bought
https://www.amazon.com/gp/product/B00ME8SZFS/ref=oh_aui_detailpage_o02_s00?ie=UTF8&amp;amp;psc=1

With the ammo stuff, I figure it is worth it to pay for 5-10 shell packs of a wide range to figure out what I like the best, and then I'll place bulk orders for that. At the moment, I like the Aguila MiniShells the best, but they are too expensive for me to shoot in the quantity that I'd like. I feel like I'm spoiled because I shoot mostly .22LR (.05-.07 per round), so dropping $.50-$1.00 per round feels steep.

I'm trying out the full size shells with a recoil pad to see if I bruise much from them. I've also considered getting one of the Mesa Tactical LEO Recoil Stocks, but I don't like that it has a pistol grip on it...and it is nearly $300.

My friend just got this exact one from Amazon.

It is solid and works well. Comes with screws too. If you look in the “used” section, Amazon Warehouse has one in very good condition for $4.11 shipped with prime shipping.